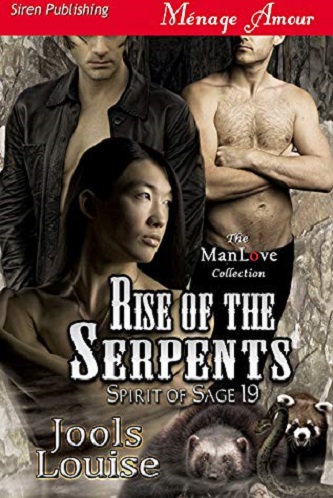 Title: Rise of the Serpents

Blurb: Blast, a wolverine shifter, finds himself in a mating nightmare. His first mate is a deadly serpent shifter assassin, Xian Lu, who has been tasked with taking Blast’s second mate, Surano, back to an evil rare shifter collector, Mr. Osaki.

Blast has his work cut out preventing Xian Lu from completing his mission, discovering the assassin is sweet, frightened to be touched, and terrified of loving anyone. Surano is an innocent, sassy red panda shifter who’s been imprisoned for half his life, escaping his stepfather, Peppy Picariello, who sold him years ago. Mr. Osaki wants his prize back. Blast and his friends in Sage have a tough time fending off Osaki’s hunters, since the collector is distrustful that his former pet, Xian Lu, is up to the mission. Xian Lu has protected Surano for years, a promise made to Surano’s mother, and is conflicted. Can he defy Mr. Osaki? He’s terrified of the repercussions if he fails his mission…but equally scared that his fears may prevent him living the life he yearns for with his mates.

Review: This was an intense story of those tasked with a mission they do not want to do but are terrified of the consequences if they fail. Xian Lu has been sent to take Surano, his mate, back to Mr. Osaki. He does not want to but he feels he has no choice in the matter. Blast, Surano and Xian Lu’s other mate prevents Xian from completing his mission an implores him to help them take down Mr. Osaki’s reign of terror for good.

With the help of Xian’s snake clan a plan is set in motion as Kobi heads back to Mr. Osaki with another gift. This was an amazing and terrifying story. I loved everything about the complex story. The characters, the plot and everything in between were riveting.