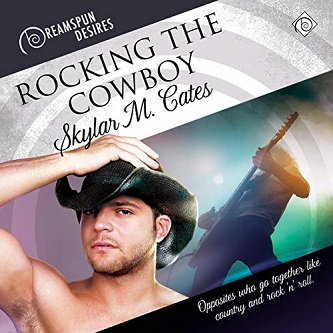 Blurb: Opposites who go together like country and rock ’n’ roll.

Long before he was a superstar, Remy Sean had a secret crush on Jed Riley. But Jed sees Remy as a spoiled pop rocker and an extension of his father’s control. Still, Jed is willing to let Remy hide from the press on his ranch—but only as a way to get his father out of his life and business for good.

Used to being admired and fawned over, Remy keenly feels the sting of Jed’s dismissal. Can he make Jed see him as more than a pain in the ass? Or is Jed too tangled up in his ranch to see past his old hurt?

Jed doesn’t believe someone desired by so many fans could want him, a simple cowboy. But Remy is determined to change Jed’s mind and steal his heart….

Review: Rocking the Cowboy is a Dreamspun Desires line book by Skylar M Cates. I’ve read the book in ebook format and while it enjoyed it well enough, I had thought that perhaps hearing the audio would add another layer of interesting to the story.

I’ve read a handful Skylar M Cates books before – some I enjoyed and one I couldn’t finish. Ultimately, while this wasn’t the greatest book I’ve ever read, I really did enjoy this one. The romance was wonderful, the characters were relatable, the story was a lot of fun and most importantly the MCs had great chemistry.

In addition to that, the narration was good. Colin Darcy is a relatively new narrator to me. However, I feel that he did justice to this story, which is great because of its simplicity. His performance was great, despite the fact it didn’t really change my mind in calling this an excellent story, to a totally awesome story.

Rockstar Remy Sean has gone through a horrifying experience on stage where he almost got trapped by stampeding fans who broke through barriers to get onto stage. His agent, who personally is not a good man but ruthless in business, decides that Remy should go spend time at the family ranch which is ran by his son, Jed Riley. The problem is, Jed does not get along with his father at all.

Remy looks forward to this opportunity to heal from his mostly psychological scars. Years ago, when he had been sixteen, he had spent the summer at the ranch. Back when things were a lot better for the Riley family. This had been when Remy first met Jed, but he was certain that over the years he had a bad case of hero worship for Jed.

Jed makes a deal with his father for Remy to stay at the ranch in exchange for his father’s compliance. Jed will do anything to make his mother and sister happy and he has zero time for his a-hole father. What Jed didn’t expect, despite a bumpy start, was that he would have a true connection to Remy.

Fans of cowboy stories will not be disappointed, and if you like yourself a bit of a celebrity falling for an ordinary guy type of story then you’re in luck here too. Overall, a fun and enjoyable audio book.