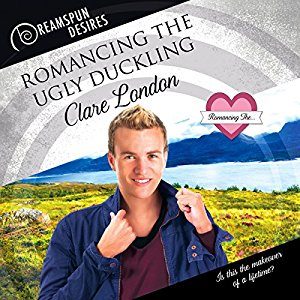 Blurb: Is this the makeover of a lifetime?

Ambitious fashionista Perry Goodwood lands the project of his dreams – track down a celebrity family’s missing brother in the Scottish Highlands and bring him back to London for a TV reality show. But first he must transform the rugged loner into a glamorous sophisticate.

Greg Ventura has no use for high fashion. He lives on the isolated island of North Uist to escape the reminder that he’s nowhere near as handsome as his gorgeous brothers and to avoid the painful childhood memories of being bullied.

Review: There is a lot for me to love with this book. Firstly, I love the author – I love the sweet English romances by Clare London. I suppose to sum up her writing in a word would be “enchanting”. I loved the first book in this series and that is absolutely true of the second book. Secondly, I love reading about someone meeting their true love and finally seeing themselves in the beautiful light that their love interest sees them. I find that truly uplifting, to see self esteem grow over the course of a book, because hey, I can be sappy. And thirdly, the audio book to me was the sheer enjoyment of listening to Joel Leslie, I’m pretty sure for the first time, and loving every moment of the hustle and bustle of England and the calm solitude of the Scottish Highlands (and yes, I am an Outlander fan and have been for a decade, I blame that!).

Greg Ventura is the guy who left the hustle and bustle of the city to live in an island in the Scottish Highlands. He comes from a family and famous, ridiculously good looking and ridiculously talented brothers. He’s the Ugly Duckling. He doesn’t think that he is as good looking as his brothers – mostly because his brothers instilled this thought into his mind. But now his brothers are calling on him again. They need him to be part of a reality TV show and look like a happy family.

That’s how Greg meets Perry (Peregrine) Goodwood. Perry is an ambitious about his career as a designer/fashionista. It’s hard to explain his career except that he is the guy that does the fashion makeovers. He’s been hired by Greg’s brothers to find Greg, make him over and get him to London to his family. The problem is that Perry gets more than he bargained for when he discovers the gentle, carefree soul that is Grey Ventura – very much unlike his brothers. On top of all that, he needs to be in London because he needs his job desperately, as mistakes from his past threaten to keep him in debt for longer than he can handle.

I love the story and the whirlwind Scottish romance. It is as simple as that. It appeals to that side of me that loves everything about British dramas and the Scottish Highlands (even with all his rain and cold).