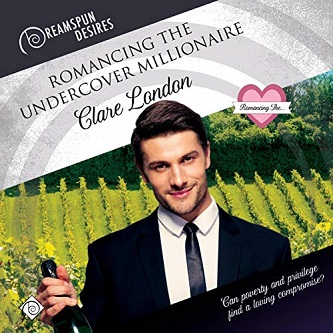 Blurb: Can poverty and privilege find a loving compromise?

Alexandre Bonfils, a rich and spoiled second son, is tired of being ignored and decides to help when the family’s exclusive wine business is in trouble. Going undercover in the warehouse, he loves the adventure – and the chance to be close to the sassy and sexy manager, Tate Somer-ton.

Tate is hardworking and financially struggling, bringing up his siblings on his own. A suspected saboteur at work is his latest challenge, but now he also has a clueless, though very attractive, new intern. There’s an immediate spark between the ill-matched couple, until a shocking acci-dent cuts short Alex’s amateur sleuthing.

Review: Romancing the Undercover Millionaire is the third book in Clare London’s Romancing The… series. I really like Clare London’s writing and this book, in fact the series, has not been an exception. All the books in the series are standalone, with no linking characters, so there’s no need to worry if you’ve not read the previous books. This series is really just sweet romances between men of completely different walks of life. This book is for the people that love the sweet romances, where Prince Charming comes in and saves the day.

The narration by Seb Yarick is quite good too, although the accents didn’t seem right throughout the book being that none of these are my native accents after a while it didn’t bother me at all. Instead the strength in his tone used for the millionaire in the book, Alexandre Bonfils, is perfect. Alex is something of an entitled guy who learns about what it’s like to be a person without the privilege and trappings that comes with absurd wealth. He also nails a great, soft spoken tone for the other MC, Tate.

With Alex being a millionaire, the ne’er do well son of the head of major international company, Tate really is his exact opposite, he’s the son of a factory worker who has become the warehouse manager for the Bonfils’ company. For Alex, after a show down with his father, Alex decides (with a bit of help) to show his family that he isn’t useless. But to do that he goes undercover in the company warehouse to track down some suspicious “accidents” that keep happening as the company approaches the release of a new wine that could win them one of the most prestigious awards in Europe. This is how he meets Tate, the warehouse manager. Tate has a few niggling feelings about Alex (who is definitely not going by the name Bonfils and has now dyed his blonde hair black). As they get to know each other, the suspicious activity begins to increase. Tate rejects his concerns over Alex when Alex is injured. When Tate insists on inviting Alex to stay with his family, the two men become closer and suddenly for Alex everything becomes more and more complicated when feelings become involved. However, all that Alex wants to do is figure what the hell is going on and who is trying to sabotage his family’s company.