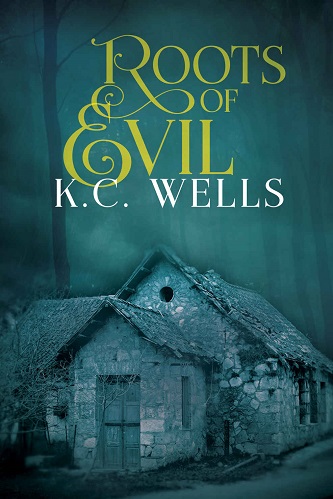 Blurb: Many consider Naomi Teedle the village witch. Most people avoid her except when they have need of her herbs and potions. She lives alone on the outskirts of Merrychurch, and that’s fine by everyone—old Mrs. Teedle is not the most pleasant of people. But when she is found murdered, her mouth bulging with her own herbs and roots, suddenly no one has a bad word to say about her.

Jonathon de Mountford is adjusting to life up at the manor house, but it’s not a solitary life: pub landlord Mike Tattersall sees to that. Jonathon is both horrified to learn of the recent murder and confused by the sudden reversal of public opinion. Surely someone in the village had reason to want her dead? He and Mike decide it’s time for them to step in and “help” the local police with their investigation. Only problem is, their sleuthing uncovers more than one suspect—and the list is getting longer….

Review: Roots of Evil is the second book in the Merrychurch Mysteries series by KC Wells. Since I’ve already read and loved the first book in the series, I was looking forward to this. I’ve enjoyed many books by KC Wells, but Merrychurch novels satisfies the part of me that loves to indulge in the typical British Mystery shows.

If you don’t get exactly what I mean, here are some examples. Think the line in the movie Hot Fuzz “it’s just a tragic accident”. Or the fact that villages of Midsommer has a murder every week? Or series that have nosey bakers, gardeners and priests that all insist on investigating crimes instead of just leaving it to the police. Well, that’s pretty much what you’re getting here.

This book is not a standalone book. This is the continuation of the relationship of ex-policeman turned pub owner (there was a British TV show with one of those!), Mike, and the new lord of the manor, Jonathan De Mountford.

Their romance and their overall wonderful relationship isn’t the main focus of this book. The romance and relationship aspects are really quite well written and realistic, because you can see that they are still adapting to their new relationship and Jonathan is getting used to the change in his life after taking his uncle’s position as earl. Although it’s not all roses in their personal life. Jonathan has his very traditional father on his back to get married and produce a De Mountford heir, despite knowing his son is gay and with Mike. Of course, this upsets Mike, but this leads to a very important point about trust in their relationship.

Instead, in the time since the murder of Jonathan’s uncle had been solved, where Mike and Jonathan had done a lot of their own investigation, life had settled down and the men could focus on their relationship. But when the woman who is said to be the local witch and famous for her jams and preserves is found dead, Jonathan can’t leave the newest mystery alone. And since Mike is an ex-cop who loves the new lord, the two men begin their own investigation on the side. Of course, they do help the local constabulary, passing on their information, but neither man can leave the mystery alone. Jonathan and Mike dig through more of the village’s secrets, looking at black mail, questionable identities, missing people, affairs and even a couple more members of the very traditional Merrychurch community who may not be as straight as they appear.