Hi guys! We have Susan Hawke stopping by today with her new release Rules to Break, we have a great excerpt so check out the post and enjoy! ❤️ ~Pixie~ 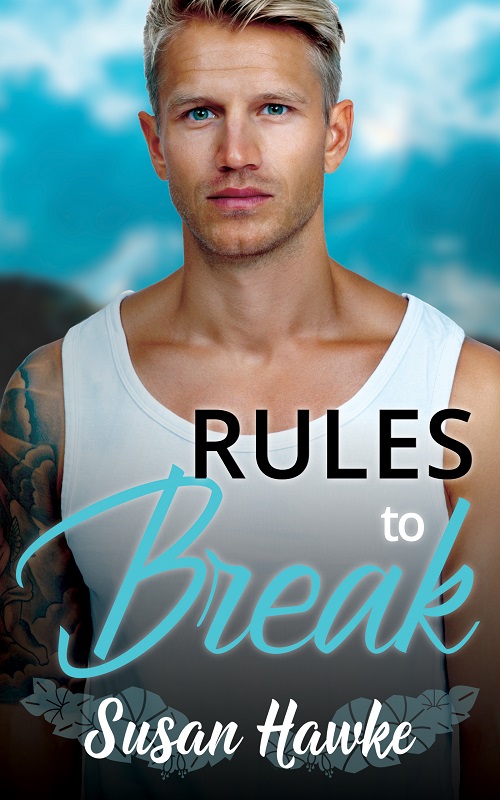 Bryan Miller is satisfied with his uncomplicated life. He’s a discipline Daddy who’s not in the market for any kind of permanent relationship. And why should he be? Like the waves he surfs in the small beach town he calls home, there’s always another body available to warm his bed when he tires of the current flavor of the week.

Preston Wallace is a snotty rich brat with enough attitude to keep all the Daddies from giving him a chance. He gets it… people are jealous of him for being rich, hot, and fit. It would take a strong Daddy to take him in hand.

A casual conversation on the night of Preston’s twenty-fifth birthday ties these two stubborn men together in a bet right out of the musical My Fair Lady. Can Daddy Bryan turn the obnoxious brat into a dateable boy within a ninety-day timeframe?

Strap in for a roller-coaster of emotions as Bryan takes firm control of a brat who might just need to know someone cares enough to try.

This is the second book in this series about not-so-perfect Daddies, adorable “boys,” and one sassy brat with an insane list of rules. Grab your fan and tissues because this series comes with both a high heat advisory and all the squishy feels you’d want from a Susan Hawke book. Possible trigger for the death a background character. When Davey looked like he was feeling sorry for me as he passed my drink over with an overly nice smile, it was all I could do not to grab the glass and throw it at him. Or toss its contents all over the Daddies. Either way, it would be equally satisfactory. Instead, I forced myself to take a polite sip and pretend their words were just bouncing off me. “Excuse me, I’m sitting right here. I find it funny that you’re talking about me like I’m the bitchiest bitch ever to bitch while you’re sitting there rudely discussing me.”

Bryan made a humming sound, completely ignoring me as he turned to Marcus. “I don’t know, I think it could be done if the right person were to take on the challenge.”

Marcus’s eyes bugged out. “Do you really think so? You’re a better man than me, because I don’t think it’s possible.”

I turned to Raphael. “You see me, right? I haven’t gone invisible? I’m literally sitting right here, aren’t I?”

The look of pity disappeared from Davey’s eyes when he started snickering. “Maybe if you weren’t such a little jerk, people would acknowledge your existence. Just saying.” I stuck my tongue out at Davey, then blushed when I noticed Bryan giving me a measuring glance.

I sat up a little straighter when he leaned out to the side and craned his head while he gave me a slow up-and-down. A few seconds later, he sat back up and turned to Marcus. “I don’t know, man. I might have to kick the tires, but I think this old junker could be rehabilitated.”

“Excuse you, who are you calling old? Puh-lease. You’re the one that’s old. What are you, pushing forty? Twenty-five is hardly old.”

Raphael frowned at me. “Aging yourself, boy? You and I both know how old you are.”

I rolled my eyes then immediately blushed all over again when I realized that everybody was looking at me. Raphael winked and popped a finger gun at the champagne glass. “Calm down, cutie. I know damn well it’s your birthday. Why do you think I told Davey to pour you a glass of the good stuff? Hold on, I forgot something.” He bent over and fussed with something under the bar before coming back up with a party hat. He set the paper cone on top of my head and fastened the elastic string under my chin like I was seven years old.

It’s stupid how good that silly act made me feel.

Raphael was humming the birthday song as he motioned to Davey. “When this glass is empty, top it off. Keep it flowing, it isn’t every day that a guy turns a quarter of a century.” Davey smiled a little more kindly at me and murmured “Happy birthday” before turning to greet a customer that had walked up.

Nobody else acknowledged the exchange and the Daddies went back to their conversation. Andrew must’ve been feeling brave, because he looked around Bryan to give me a once-over himself before turning back to their conversation. “So let me see if I have this right. You think that you have what it takes to turn him into a decent boy? What kind of timeframe are we looking at here? I mean, look at him. He’s not hard on the eyes. It’s the ears that get hurt when he starts with that mouth.”

“Hey, be nice.” Raphael immediately came to my defense. “It’s the boy’s birthday. It’s one thing to joke around, but you guys are straddling the border of bullying. Take it down a notch.”

Marcus snorted. “What, are we supposed to forgive his rudeness the rest of the year because it’s his birthday?”

Andrew really must have thought he was hot shit with the other Daddies sitting there, because he tested my resolve to not tell the truth of the bathroom story. “And can we all just take a moment to remember how he ran off with my clothes a few months ago?”

Nope, I definitely wasn’t touching that one. Not on my birthday. Nope. Not today, Satan. Let’s just say that Andrew was a man I wouldn’t touch with a stray dog’s dick—I wasn’t into animal cruelty. Asshat.

I tapped Bryan’s arm. “Go ahead, answer Marcus’s question. I’m curious. If you’re such a fabulous makeover artist and I’m nothing but a rusty junkyard heap of crap, how long would it take you to turn me into a rehabilitated boy that any Daddy would want on his arm?”

Bryan glanced at me with a cocky smirk. “Please. I could turn you into a decent boy within three months. Ninety days with me and I’d wager that any Daddy in this place would be proud to have you as his boy, Preston.”

Marcus snorted so hard he sprayed whiskey through his nose. “Impossible. It couldn’t be done. Especially not in that short of a timeframe.”

“If I say I can do it, then you can take my word for it that it’s possible.” Bryan motioned for a refill on his beer, tossing me a wink in the process.

Marcus drummed his fingers on the counter, looking me over with a thoughtful frown. He shifted his eyes to Bryan and began slowly nodding. “You know what? Okay. Prove it. I dare you. Put your money where your mouth is, Bryan. I’m willing to bet you can’t make this brat into a decent boy within ninety days.”

Bryan leaned back on the barstool, crossing his arms over his chest as he turned his head from left to right to look at first me, then Marcus. “Name your terms, Marcus. I’ve never backed away from a bet.”

I started getting irritated as the old musical My Fair Lady suddenly played through my head, and I slammed my palm down on the bar. “What? Hell, no! If you think you’re going to do some sort of Eliza Doolittle action with me, then you’ve got another think coming.”

Davey cracked up and grabbed a broom. He started dancing behind the bar, pretending the broom was his partner as he sang “I Could Have Danced All Night.” That is, he did until Raph took the broom and held his hand out instead. Davey took it and let Raphael swirl him around the bar area while he lifted his knees higher and attempted a tango as he switched songs. As an avid reader and big romance fan myself, I love sharing the stories of the different people who live in my imagination. My stories are filled with humor, a few tears, and the underlying message to not give up hope, even in the darkest of times, because life can change on a dime when you least expect it. This theme comes from a lifetime of lessons learned on my own hard journey through the pains of poverty, the loss of more loved ones than I’d care to count, and the struggles of living through chronic illnesses. Life can be hard, but it can also be good! Through it all I’ve found that love, laughter, and family can make all the difference, and that’s what I try to bring to every tale I tell.

I’m a happily married mom with one snarky teenage boy, and three grown “kids of my heart.” I’m more widely known for my mpreg writings as Susi Hawke; this new name is a departure from that. Whether written by Susan or Susi, the books are filled with that all-important love, laughter, and family I mentioned; the only difference is that this name has no male pregnancy. I look forward to sharing my stories with you, and to bringing more romance and laughter into this world that needs it so very badly.