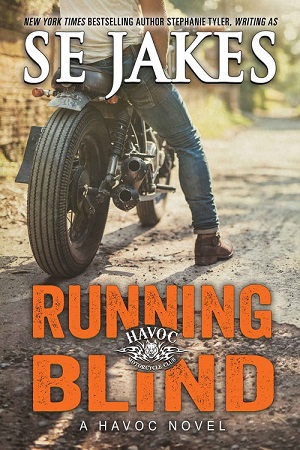 Blurb: An ATF agent who lives for danger finds what he craves from an outlaw biker.

It’s impossible for a one-percenter motorcycle club member to simply walk away—and no one knows that better than undercover agent Bram, who’s almost killed for trying. His cover isn’t blown—yet—but it’s only a matter of time. The Heathens won’t be satisfied until he’s dead, so he decides to lay low and heal.

But when his younger brother’s disappearance throws a wrench into his plan, Bram ends up in Shades Run, a town ruled by the notorious Havoc MC. In less than twenty-four hours, Bram finds himself at the mercy of Sweet, Havoc’s president, as he throws himself into the undercover role of a lifetime: himself. A man who’s never belonged anywhere, and who will do anything to protect his younger brother.

When finding Linc seems impossible, Bram is torn between Sweet, Linc, and revealing his true identities . . . and there appears to be no way out. Once again, he risks it all trying to save it all. Only this time he’s got no backup to save him if he falls.

Review: Each book in the Havoc collection features a new romantic couple. To enjoy the overall story arc and crossover characters, I would recommend reading the series in sequential order.

Bram is ATF and has been undercover in one of the deadliest motorcycle gangs for close o two years. He was basically a probie and was suppose to be brought in fully. Which means getting his ass kicked, however he decided it was time to get out. To bad they caught on and kicked his ass, dead man walking. Then he got the call, his little brother was missing.

Sweet is the head leader of Havoc, a motorcycle club that was just as deadly if not more. However they also had honor. Sweet could kill when needed so why was he not wanting to kill Bram. A man looking for his brother, a member of another club who was a traitor and surprise of all, ATF.

After reading the first book I was not looking forward to this story. However it turned out better than I thought it would. It is a long drawn out book but the action made up for it. Although I will admit that the action felt a little low for what gangs or clubs usually are. Also there was the fact that this guy was law enforcement and didn’t really come off like it. It makes you wonder what truly happens with undercovers. The characters just seem a bit more fluff then actual bad guys.

There was something missing from the whole book. You have adventure mixed in with danger and kinky sex, but it just wasn’t enough to draw me in like it should have. The story did catch my attention and keep it, but it didn’t make me want to read more. I really liked Sweet and his past does give me more insight into his character but he comes off more like a old man in parts. Bram comes off as weak and not like the character he is suppose to be. I did like that he would do anything for his brother and that brought him up in my eyes.

The story itself is well told and only a few writing errors that were noticed. The pace was a little slower than I would have liked but still was much better than the first one. It is still a little dry to me but it is still a good read. However I hate to admit that I just really didn’t care for it like I should have.