Hi guys! We have Lloyd A. Meeker popping in today with his new release Russ Morgan, PI, we have a great excerpt and a brilliant $10 NineStar GC giveaway so check out the post and enter the giveaway! ❤️ ~Pixie~ 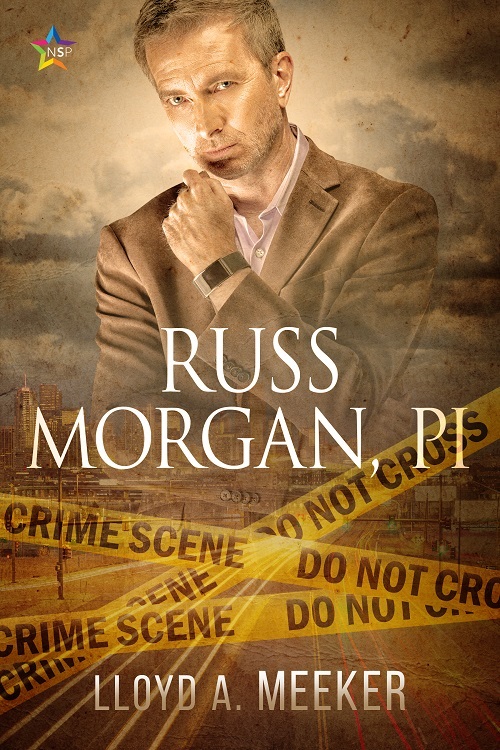 Who’s blackmailing the high-profile televangelist whose son was miraculously cured of his homosexuality many years ago? Threatening letters using old Enigma songs from the 90’s have got Reverend Howard Richardson spooked. Psychic Denver PI Russ Morgan uncovers obscene secrets shrouded in seeming righteousness, but must make peace with a sword of justice that cuts the innocent as well as the guilty.

When Russ Morgan investigates a vandalized marijuana grow in Mesa County, he lands in the middle of a family feud that escalates into murder. Who is willing to go that far to get what they want? Russ’s personal life is escalating, too—he has to figure out if he’s brave enough to begin a relationship with Colin Stewart, who is half his age.

The little man in the expensive suit sneered as if I should have known what brand he wore and wilted before its awesome power. Armani? Versace? Burberry? I had no idea, and it didn’t matter to me that I wasn’t current on suits likely to cost more than my monthly mortgage.

His sneer had come from a designer collection, too. Men more generous than I am might have imagined he’d meant his lip movement as a smile that had come out deformed, but every time his lip curled, his aura came up spiky and dark. No, it was a sneer.

He was not happy to be in my office. In fact, he’d walked in carrying some kind of grudge. Since I’d never met him before, I figured his issue wasn’t mine to fix until he shared. I let him stew.

He leaned forward and snapped his business card on the middle of my desk like it was an ace of trump. “My client wants you to find his son’s blackmailer.”

I picked up the business card and studied it, although I already knew what it said. Andrew Kommen, Managing Partner, Stelnach, Kommen and Breyer. On the phone, his assistant had spoken the name with outright reverence, expecting I’d be awed or at the very least grateful for this visitation.

I pulled one of my own cards from the desk drawer. It said Rhys (Russ) Morgan, Investigations and listed my license number, address, and phone number below my name in a perfectly professional manner. Granted, it wasn’t embossed on the same quality stock as Mr. Kommen’s, but I offered it to him anyway, the second half of the business card minuet. When he smiled, thin lipped, and didn’t take it, I smiled back and placed it gently on the desk in front of him.

He gazed at it for a second, just long enough to let me know touching it was beneath him. I had to hand it to him—his sense of nuance and timing was impeccable. I tried to imagine him doing stand-up comedy. It didn’t work.

According to reputation, Andrew Kommen’s firm had enough money to hire every detective in the city for a whole year and still never think of cutting back on the Jamaican Blue Mountain coffee beans in the general staff room. But here was the managing partner, sitting opposite me in my modest too-close-to-Colfax-Avenue office, slumming.

“I’m a little surprised you’ve come to me,” I said. “We don’t usually travel in the same circles.”

“Believe me, you were not my first choice.”

“Until you sign this nondisclosure agreement, there will be no names.” He lifted an attaché case too sleek to be made anywhere but Italy onto the desk and popped it open. Out came two documents, which he pushed across to me.

I read far enough to learn they would ruin me if I breathed a word about this case to anyone but an authorized representative of the firm or its client. Recovery of fees, punitive damages, etc., etc. I stopped before getting to the paragraph stipulating grievous bodily harm if I divulged any information, but I’m sure it was in there somewhere.

I looked up. “You guys play hardball.”

“I’m so glad that registered with you. It would be unfortunate for you if that were to slip your mind. Ever.” He smiled again, this time showing teeth. “On the other hand, we will pay you well for your services. Very, very well.”

“There are limits to what I can keep confidential with the police, for example. I won’t violate those.”

“Of course.” Kommen shrugged, a tiny gesture dismissing a tiny concern. “You will receive no harassment from the police in this matter, I can assure you.”

That smelled bad. I shifted my focus to check his aura. Calm and probably quite clear for him. At the very least, he believed what he was saying to be true. I watched him for more clues but didn’t see any.

Could he and his firm work their connections with the police to deliver on that promise? If so, did I really want to do business with a lawyer who could pull strings like that? I wasn’t eager. I gave him another chance to change his mind. “Surely your firm could do better than hiring me for what is obviously a very sensitive case involving very sensitive people.”

I had rarely heard that word so carefully filled with insult yet so calmly delivered. It was the perfect smackdown. I couldn’t help smiling in admiration. “Nice. But?”

“You’re a known homosexual, with knowledge of homosexual activists.” This time the disapproval was front and center. “We believe vengeful homosexuals are behind this attack on my client and his family. This matter requires extensive knowledge of your…subculture.”

Got it. Sub, as in lower than. I struggled not to laugh. “I see.” I imagined several generic scenarios, all involving the gay son of some prominent figure. I already knew whose side I was on. I reached for the nondisclosure agreement.

“Well, I think I’d like to help your client’s son.”

“He’s not the one who’s important,” Kommen snapped. “Your job is to help my client. The rest of the family’s affairs are none of your business.”

I studied the man across from me with a sudden twinge of pity. He looked even smaller now—pinched and dried out. Mean and empty.

“I think we both know you may not be able to control the scope of the investigation like that, so please don’t pretend.” I signed both copies, and he signed for his firm and his mysterious client.

Then he pulled out the letter of engagement, check attached. “Your base salary will be $7,000 a week plus expenses for which you will provide receipts. My client wants this matter finished expeditiously. If you solve the case within four weeks of engagement, you will receive a $25,000 bonus. Payment in the method of your choice.”

My pride thought he put just a little too much emphasis on the if. “Before I sign anything else, you need to brief me on the nature of the assignment. Otherwise, we’re finished already.”

He stared at me for a minute. I stared back, prepared to wait him out. He was in my office, after all, and he’d already made it clear he didn’t enjoy slumming with known homosexuals who might even know a vengeful activist or two. Me, I was perfectly comfortable. I often dealt with jerks.

“Your client will be Stelnach, Kommen and Breyer, Mr. Morgan. Our client,” he said as if giving me far more than I deserved, “is Reverend Howard Richardson. It is likely you will never meet him or speak with him. All your communication concerning this matter will be directly with me. Under no circumstance are you to initiate contact with Reverend Richardson or any of his family. Is that clear?”

I nodded. I appreciated that Richardson would want to keep as far as possible from an investigation of blackmail against his gay son. At least, I assumed his son was gay. Even before Proposition 2, Richardson had been a powerful figure in every anti-gay political pushback in Colorado as well as nationally.

Oh, the irony. A high-profile family values advocate with the very abomination he sought to eradicate lurking in his own household.

“And he wants to keep his family aberration a secret?”

“Oh, no.” Kommen looked way too pleased at my wrong guess, as if it confirmed my inadequacy. “He made no secret of his son’s illness.”

He leaned forward, apparently to drive home the point. “In 1993, when James first admitted to his father that he was afflicted with homosexual desires, the Reverend enrolled James in a therapeutic program. He hid nothing from anyone. Indeed, he called to his congregation to pray for his son’s victory over darkness.”

My stomach lurched. Reparative therapy. The devil’s work if ever there was a devil. I kept my face neutral. “And how old was James then?”

“Seventeen. Committing him to the rescue program was perfectly legal.”

“I have no doubt.” I stuffed my nausea, deciding I wanted more than ever to help James to recover from his father’s abuse, although I didn’t know if I had the skills for that. I could read auras, but I’d never tried to heal them. “So what then?”

“He was transformed. His father declared it a miracle. James joined his father in ministry, although not in a political way. He now supervises a number of successful educational and outreach programs for the church as well as the publishing operation.”

The story was way too tidy. “Let me guess. James married, and they’ve got two children.”

“But it’s not all harmony and light in paradise, is it?” I wasn’t asking a question.

“About two months ago, threatening letters from someone calling himself Enigma began showing up. In very disturbing ways.”

I wanted to make sure I understood. “You’re saying that the way the letters arrived was disturbing, in addition to their threatening content?”

Kommen shook his head. “First, the letter of engagement,” he said pointing to the paper on my desk. I signed. He signed. He put his copy in his attaché case and snapped the latches.

“The Enigma letters are in our keeping. Come to our offices tomorrow at nine, and you can examine them. You may make copies, but the originals remain in our custody.”

Kommen stood, and I followed suit. I offered my hand, which he shook for less than a second. I retrieved my spurned business card from the desktop and watched him leave. The documents from my new best friend went in the safe, and I stared out the window at Pearl Street, taking my time to decide where to have lunch. I like taking my time with important decisions. At fifty, I figure I’ve earned the right. Having led what can only be described as a checkered life, I can honestly say I’m grateful for all of it. I’ve been a minister, an office worker, a janitor, a drinker, and a software developer on my way to finishing my first novel in 2004.

But basically I’m just a psychic empath, a little weather-beaten and still learning how to live in the world just the way it is. The thing is, I experience the world as so much more than is generally accepted. That’s the challenge. Writing stories is the best way I’ve found to examine and share the questions, the wonders I engage daily.

My husband and I have been together since 2002, married since 2007. Between us we have four children and five grandchildren. We’re based in south Florida, and work hard to keep up with the astonishing life we’ve created for ourselves.