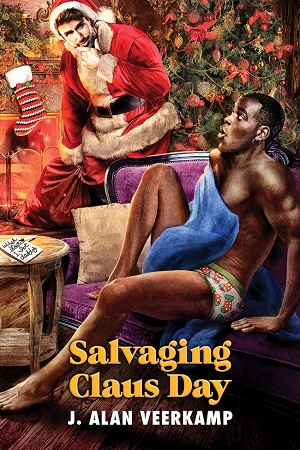 Blurb: For three years, Filo has reveled in silence and solitude as the sole occupant of a space station, where he maintains the communication satellite.

Everything changes with the appearance of Luz Espina’s lifepod. Filo shares many interests with the flirtatious Luz, though Filo’s isolation has strained his communication skills. Still, Luz pushes all his buttons… and reminds him of the last man he was attracted to—an attraction that ended in disaster because the man was straight. When Luz learns Filo has never celebrated a holiday, he vows to cobble together a Claus Day celebration for them to share. But is it merely a friendly gesture… or something more?

Review: Filo has been in space for quite some time. The blurb is really kind of off. In the story it says Filo, and three others. He is not exactly human but more like he was created or engineered. He was a fighting soldier, but had no taste for blood. So he asked to be put into space to work. Luz is sexy as hell and wants Filo, even tried to walk around naked to get a reaction. Now with it being Claus Day, he knows how to make it work.

This was not one of the stories I would have chosen for the holidays. There were parts of it that were off which made it hard to work out. It also starts off really dry and dull, and now I know all about space stations. Then it comes to naked men, and yeah just really bizarre. It was not my kind of story and did nothing for me. The ending was really nice, but I just don’t see how they get from one point to the steaming want in the end. I am sorry but this book was just not for me.