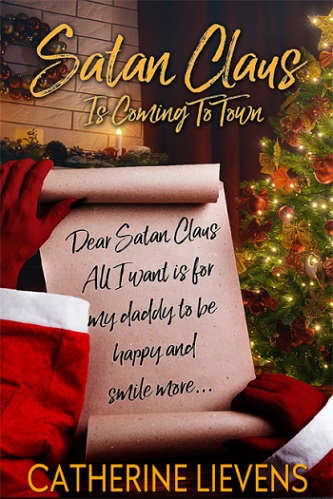 That’s how the letter Satan received starts. The little girl who wrote it asking for her father to be happy again meant it for someone else, and while that’s obvious, Satan doesn’t care. Santa will never find out, as long as Satan’s nosy assistant, Jasper, doesn’t tell him. Satan isn’t sure why he decides to watch Zoe and her dad, except that he’s bored and lonely. He surprises himself when he moves into the house next to theirs and introduces himself as Sam—because he couldn’t exactly give Riley his real name, could he?

Riley has been divorced for years, and he doesn’t have time for a relationship. He has trust issues and no will to get over them, not when his daughter is the center of his life. Then a new neighbor moves in, and he’s adorably awkward and sexy. Riley tries to keep Sam at arm’s length, but he can’t help but fall in love with him, and he’s pretty sure Sam is falling for him, too.

Then Sam confesses his real name is Satan, and that he’s the king of Hell.

Review: Zoe wanted a doll, Lego’s and for her dad to be happy for Christmas. However she made one little mistake in the name. Now Satan was probably going crazy but he wanted to give the little girl what she wanted. To bad for him he had no clue how to make her father smile. Time for a walk on the human side.

Riley has been divorced for three years and had partial custody of his daughter. He never wanted to trust any man again. Then in walked Sam, but Sam is Satan with a big secret.

When I first got this book I swear I kept looking at it wrong, till I realized it said Satan instead of Santa. I got a kick out of this story and lets just say that Satan was a cutie. He made me smile and lets face it so did the cat. It was entertaining as hell and I spent part of the time laughing my ass off.

I had a blast reading this and can guarantee that it will be read many times over and not just at the holidays. It was a big hit with me and I can’t wait to read it again now. I also can’t wait to see what the next story this amazing author is going to come up with.