Hiya guys! We have Sita Bethel stopping by today with her new release Saved by Grace, we have a great excerpt and a fantastic $10 NineStar GC giveaway, so check out the post and enter the giveaway! ❤ ~Pixie~ 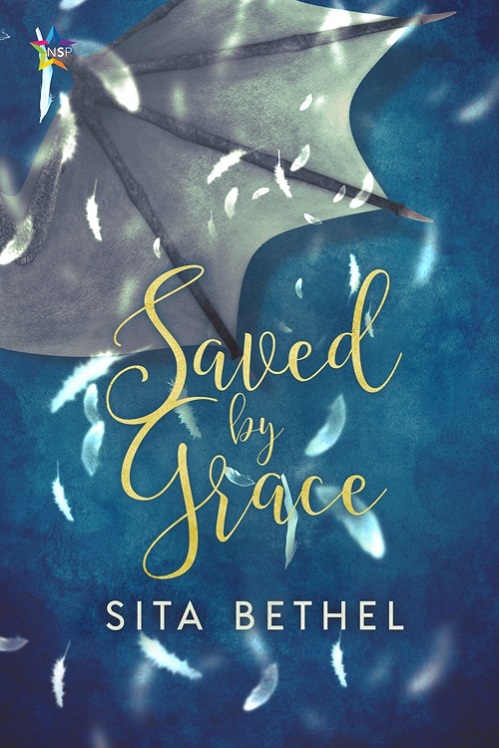 Alel is a demon, and he is good at lying. The image he wears is a lie—no one can see his wings or barbed tail, nor can they see the horns peeking from a shag of hair salted with strands of white and pale gray. Half-starved, Alel is short and gangly and has lavender freckles dusted across his nose and cheeks. Lust created him along with all other incubi and succubae for one reason—to encourage humans to sin while feeding off of their sexual energy. Anything more than carnal acts is forbidden, but Alel yearns to be kissed, to bury his face in the crook of a lover’s neck and hold them until dawn.

When he meets a human named Jackson, who’s more interested in snuggling on the couch while watching movies and making out instead of one-night stands, Alel realizes dating Jackson would leave him famished, but he can’t resist the temptation.

As their relationship builds, Alel and Jackson explore the boundaries of both sexual and romantic intimacy. The more they’re together, the more they fall in love, but Alel knows if another demon ever catches him, he’ll be dragged back to hell for breaking taboo.

Alel was a demon, and he was good at lying. The image he wore was a lie, a specific one called a glamour that allowed him to appear to others however he wanted. His favorite human persona was teak-skinned with olive eyes and braids like so many tiny garden snakes. To any passerby, he was tall and sculpted, confident and relaxed, dangerous and mysterious, and it was all a pretty lie.

No one could see the wings or the barbed tail, nor could anyone see the horns peeking from a shag of hair salted with strands of white and pale gray. He was short, and gangly, and had lavender freckles dusted across his nose and cheeks. No one would want him as his true self, but Alel was a demon, and he was good at lying.

He stood veiled in cigarette smoke. He didn’t drink; it was too hard to hold the glamour if he was drunk. Instead, Alel leaned against a wall with his arms crossed. He scanned the party crowd, searching for someone to take home for the night. Incubi were children of Lust; they fed off desire and satisfaction the way human infants survived off their mother’s milk—by suckling the nourishment straight from the flesh.

He saw Naberius walking out of the throng of people with a human slung around his arm. They stumbled, both drunk and laughing. Unlike Alel, Naberius loved to drink and eat. His glamour persona was a rugged, tanned gym fanatic, but in reality, he had quite the pooch in his belly from taking lovers three or four at a time, and by the gleam in his stark blue eyes, Alel could tell he was in no mood for a single lover that night.

“Never.” Alel snorted, although in truth, he was lonelier than he could bear, but no amount of one-night stands could fix the hollow space inside him.

“Well, my friend here is.” Naberius pinched the human’s ass. “Want to go back to my place, Al?”

Alel sized up the human. He wore thick-framed, bright-red glasses and looked candid. Alel was fond of virgins; they were bashful and responded nicely when he brushed his fingers against their skin. Alel cupped the man’s face and caressed his thumb across the human’s cheek.

“Do you want me to come?” Alel asked, his voice sultry and inviting because he was good at lying.

The human turned away. He blushed and nodded his head. Naberius gestured toward the door and Alel followed them. Naberius’s Ferrari Lusso sat double-parked in the handicapped zone. They climbed into the car and took off at whatever speed Naberius fancied.

Alel struggled not to roll his eyes. It was all so cliché he couldn’t stand it. Yet another demon with an expensive, red car—why always candy-apple red? It was like they were afraid driving a white car would somehow turn them into an angel. Yet another demon driving without any regard to the speed limit. Every demon Alel knew was the same, and he could never figure out why they thought speeding made them more evil. Speeding was illegal, but it wasn’t a sin. However, no matter how many times Alel explained this, his consorts always argued with him, saying it proved they were superior to humans because they didn’t have to follow human laws. They didn’t have to break them, either, if they were above them, but that was an unpopular opinion, and Alel seemed to be the only one afflicted with it.

They both escorted their human meal into Naberius’s apartment and straight to his bed. Without ceremony, they tugged off every scrap of clothing between the three of them and lay the human on black satin sheets—which was also cliché—why was it always red sports cars and black satin sheets? Alel wanted to scream.

“Do your thing.” Naberius grinned.

Alel gazed at the human. The man’s eyes were a warm hazel color. Alel caressed his cheek again. The incubus was awful at hunting and was half-starved because of it, but Alel had a strange talent for calming virgins, so Naberius often invited Alel to share meals to take advantage of his skill. It wasn’t hard to seduce a shy human. Alel relished the time it took, talking to them, touching them little by little, watching and listening for nonverbal queuing and giving them what they were too nervous to vocalize. The fun of a meal came from the anticipation of the first taste, and Alel enjoyed the mouthwatering moment before feeding more so than he ever enjoyed the main course.

Alel leaned down, almost brushing his lips against the drunk, hazel-eyed human. A wicked, imaginary tug pulled his lips close to his prey’s, but he never indulged the urge to kiss because kissing was an act of love and therefore forbidden to him. Teasing, on the other hand, was permitted, and teasing always made humans arch up and whimper, begging for what Alel held out of their grasp.

And they had to beg. The human had to want it. Desire was important. An incubus offered what a human already craved and guided them, gently and sweetly, away from God and toward anything else. Lust, Greed, Sloth, Envy, Avarice, Wrath, and Pride: those sins were the parents of every demon and who the demons answered to if they failed to create discord in the world.

“Are you nervous?” Alel ran the pad of his thumb across the human’s bottom lip instead of kissing him.

“A little,” the human gasped, already hitching up and trying to grind their bodies together. Sita Bethel obtained a B.A. in Creative Writing at Arkansas Tech University; however, she learned how to write fiction on sites such as Archive Of Our Own and fanfiction.net. She keeps coloring books near her computer for when she’s “writing,” and owns an awful lot of dice for someone who’s never played a tabletop RPG. Sita Bethel currently lives in Arkansas, teaches Zumba Fitness and Salsaton classes at a local gym, and hopes to someday own a fortress of solitude staffed with incompetent henchmen.