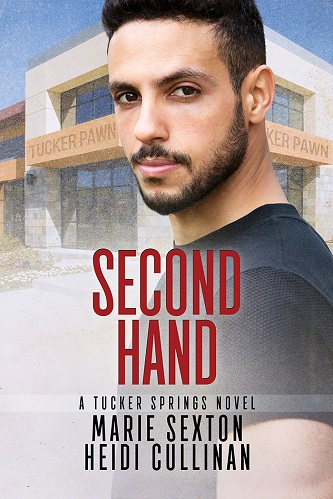 Blurb: Paul Hannon flunked out of vet school. His fiancée left him. He can barely afford his rent, and he hates his house. About the only things he has left are a pantry full of his ex’s kitchen gadgets and a lot of emotional baggage. He could really use a win—and that’s when he meets El.

Pawnbroker El Rozal is a cynic. His own family’s dysfunction has taught him that love and relationships lead to misery. Despite that belief, he keeps making up excuses to see Paul again. Paul, who doesn’t seem to realize that he’s talented and kind and worthy. Paul, who’s not over his ex-fiancée and is probably straight anyway. Paul, who’s so blind to El’s growing attraction, even asking him out on dates doesn’t seem to tip him off.

El may not do relationships, but something has to give. If he wants to keep Paul, he’ll have to convince him he’s worthy of love—and he’ll have to admit that attachment might not be so bad after all.

Review: Paul moved to Tucker Springs for his girlfriend so she could sell her sculptures. When she found out he failed his vet school and got a job as a receptionist, she found someone else. Someone she felt could help her make it in the art world.  Down on his luck, Paul kept trying to win Stacy over. For her birthday, he went to the Tucker Springs Pawn to find a gift for her.

All Paul really wants is love and acceptance. To be able to make out in public, hold hands in public.

This was such a fun, romantic story. I loved how Paul was so clueless that El was taking thing just to see him, especially when he took the dog left on the vet’s steps for Paul. I loved the way El’s friend chided him about Paul and the fun banter between El, his friend, and his family.

If you are looking for fun, humorous romance, like bisexual men, Gay for you stories, cute dogs, gardening and an all over great romance, this is the book for you. It’s perfect for an afternoon of relaxing.