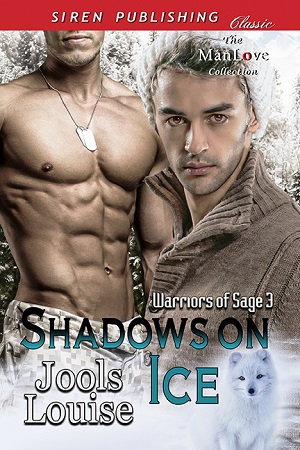 Blurb: Ice, a white Siberian tiger shifter, finds love in the most unlikely place after returning home to Siberia to exterminate a madman. Dima, an Arctic fox shifter, is the brother of Ice’s first love, who was killed by Dimitri Petrovsky…the head of Stronghold, and a deadly enemy.

Between them they must unravel the plot to wipe out shifters in Russia and rescue a group of shifters in need before Dimitri’s sick plans become a reality. Ice has a secret, though…Dimitri is his father, a man who threatened to murder his own son when Ice came out as gay. Fifteen years later, Ice is determined to find out what Dimitri’s problem is and stop him from his murderous plot. Can Ice and Dima succeed? Their journey takes them to the heights of passion and utter terror as their investigations uncover even more disturbing details.

Is Dima’s love enough to cast light over the shadows on Ice?

Review: Ice takes it upon himself to stop his fathers evil ways. He meets his contact, Dima a childhood frend, the two set off to take down Dimitri and his cohorts but what they discover is so much worse than either of them could have imagined.

I was horrified by the conditions the children were kept in and what was done to them. My heart wept for all the injustices done to the shifters that had been killed on the whim of a madman. I love this series. It gets better and better with each new addition. The bad guys seem in endless supply and at times makes me wonder if the shifters will ever be free of danger. But then I’m reminded by watching the news that danger is everywhere and comes in many forms.