Hi guys, we have J. Scott Coatsworth stopping by today with the tour for his new release Skythane, we have a fantastic excerpt, a brilliant $25 Amazon GC giveaway and Shorty’s review, so check out the post and enter the giveaway! ❤️ ~Pixie~ 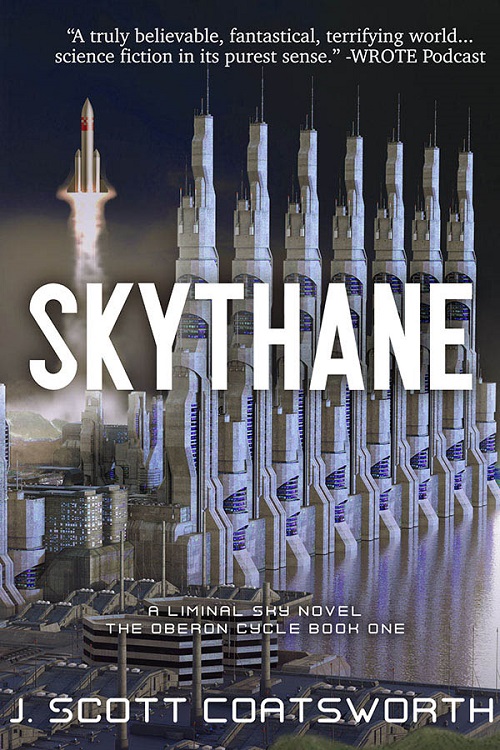 Jameson Havercamp, a psych from a conservative religious colony, has come to Oberon—unique among the Common Worlds—in search of a rare substance called pith. He’s guided through the wilds on his quest by Xander Kinnson, a handsome, cocky skythane with a troubled past.

Together, they will journey to uncover the secrets of this strange and singular world, even as it takes them beyond the bounds of reality itself to discover what truly binds them. 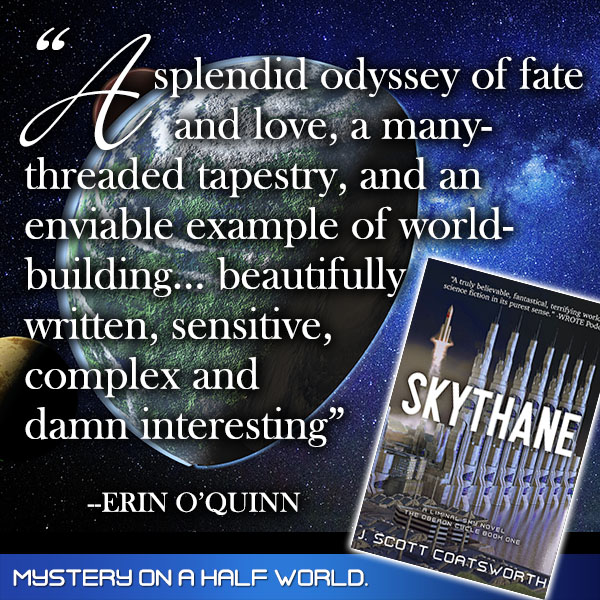 Quince was staring at him intently. “What?”

He frowned. This whole thing made no sense. “I just got caught up in the story, that’s all,” he said defensively.

He absorbed that for a minute. “What, like some kind of time travel?”

She shook her head. “You were there with me at the time.” She put a hand on his cheek, searching his face. “I know it’s a lot to swallow, but one of those babies was you.”

“It couldn’t be.” It was nonsense, surely. How could he have been? “I was born on Beta Tau. My parents are Joseph and Angela Havercamp. I’ve never even been to Oberon before.” What was this crazy angel trying to pull over on him?

Her hand still rested against his cheek. It was warm and comforting.

“I brought you to Oberon, along with Davyn, who is now called Xander, almost twenty-five years ago. You were both children then, Xander a little older than you.” Her eyes had a distant look about them. “I carried you across the threshold, and then I found you both homes. Xander here, and you on another world.”

He jerked away from her touch as if he’d been burned. This wasn’t happening. She couldn’t be right. He was a Havercamp, born and bred. “Look, I don’t know what your angle is here, but I’m not who you think I am. I just came here to investigate the pith shortage, and now I’ve gotten mixed up in this crazy scheme of yours—”

“Your back itches, doesn’t it?”

“What?” he asked, struck by the sudden change of subject.

Quince stared at him, fully present in the moment. “Does your back itch?” Her tone was deadly serious.

“Well, yes, but I don’t see what that has to do with anything.” This was getting stranger and stranger, and he had nowhere to run. She’d made sure of that.

Quince got up and rummaged through her saddlebags, pulling out a mirror. “Take off your shirt.”

“Why? Are you going to hurt me?” He backed up toward the rope that surrounded the clearing.

Quince snorted. “With a mirror? Hardly. I just want to show you something. Then if you don’t want to believe me, I’ll let it go.”

Fair enough. He shucked his shirt, though it seemed tight coming off.

He complied, and she held the mirror up so he could see his back. “What do you think those are?”

He looked and his face went cold. Protruding from his shoulder blades were two strange lumps, the skin over them looking red and bruised.

He reached around frantically to touch one of them. It was tender and warm. “Jesus, Mary, and Joseph….” He spun around, trying to reach them. “What are they? What did you do to me?”

“Your wings are coming in. It’s something that happens to every one of us from the first-wave settlers of Oberon—we usually induce it at puberty with a special hormone. Yours were delayed, but you drank some of the ethilium in that water I gave you—”

Jameson’s breathing quickened, and he felt trapped in the small clearing beneath the alien trees. Everything was wrong. “I don’t know… I can’t…,” he rasped, unable to get enough air. What the hell is happening to me? He looked wildly back and forth, his heart racing and his mind struggling to follow.

He turned and ran blindly away, ducking under the rope and into the open forest. His panic carried him off into the darkness, ignoring Quince’s frantic calls to come back. He was blind to everything but the need to flee, to escape this strange trap that he could feel slowly closing its jaws around him. 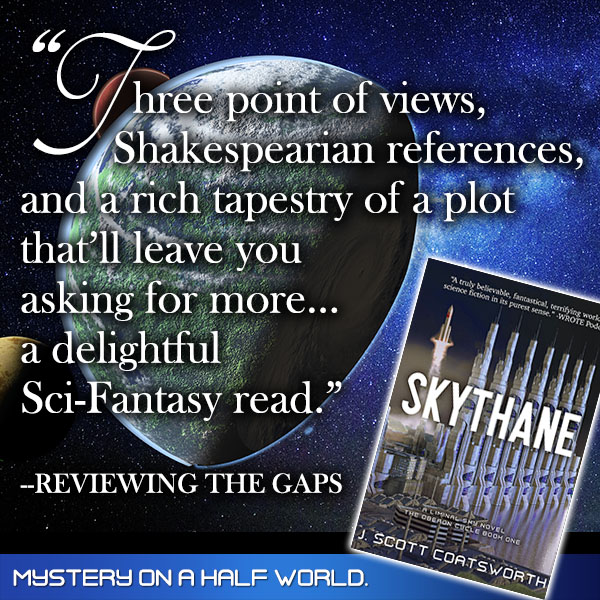 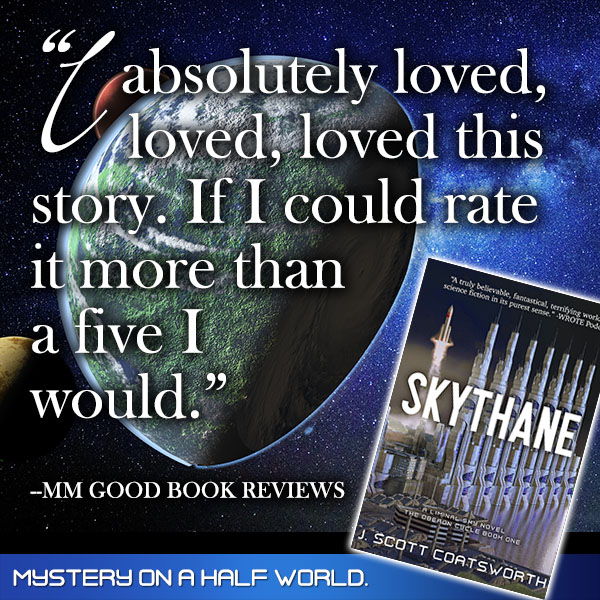 A Rainbow Award winning and runs Queer Sci Fi, QueeRomance Ink, Liminal Fiction, and Other Worlds Ink with Mark, sites that celebrate fiction reflecting queer reality, and is a full member member of the Science Fiction and Fantasy Writers of America (SFWA). 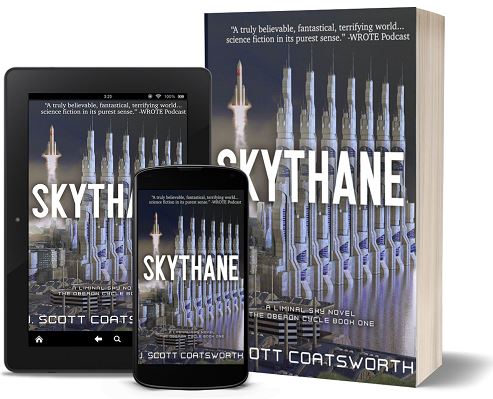 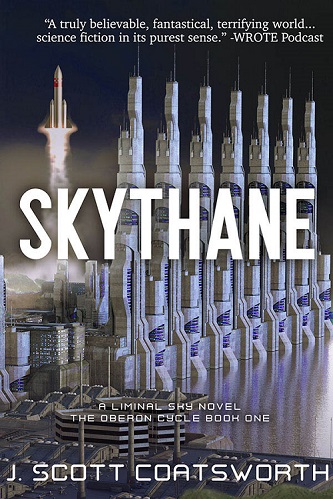 Blurb: Jameson Havercamp, a psych from a conservative religious colony, has come to Oberon—unique among the Common Worlds—in search of a rare substance called pith. He’s guided through the wilds on his quest by Xander Kinnson, a handsome, cocky skythane with a troubled past.

Together, they will journey to uncover the secrets of this strange and singular world, even as it takes them beyond the bounds of reality itself to discover what truly binds them together..

Review: Two men taken to safety as children will come together twenty five years later to save the world.  Xander is a Skythane. He’s had a hard life. Abused at the hands of a diabolical man’s hands he is saved one day by Alix who cherishes and nurtures him until Alix disappears.

Jameson grew up in a religious home and became a psych. He helps people as is what he’s always wanted to do. The time comes when he is tasked to find out where a drug called Pith comes from. It will be a journey fraught with revelations and danger, spanning decades of memories.

The twists and turns and the buried memories were spellbinding to witness. This book had it all. Drama, mystery, suspense, a corrupt corporation, a world on the brink of destruction, characters that added insight to the ever growing mystery as to what it going on, and two men who discover who they truly are and what they are destined for. Simply put this was a fascinating story that grabs your attention from the start.

I absolutely loved, loved, loved this story. If I could rate it more than a five I would.

The Skythane people were described beautifully as well as the worlds themselves. It was so elaborate that I felt as though I was there every step of the way. It was an amazing story from start to finish.

Highly recommended for all.