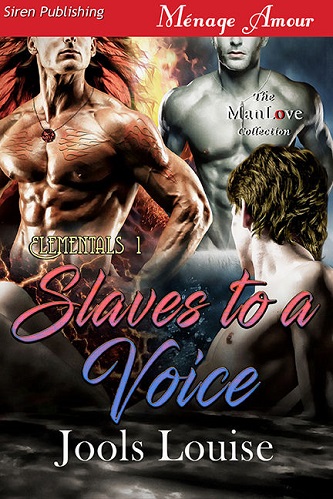 Title: Slaves to a Voice

Blurb: Ferno, god of fire, has a problem. His stars are dying. Enlisting the help of Fross, god of snow and ice, a deity he’s already in love with but knows that their union can never work, he and Fross are flung into a dastardly plan to destroy all things Elemental. Ferno meets an old foe, Ibi, who’s on a revenge mission, determined to destroy everything Ferno loves…and put the Elementals out of business. Heading for Igneos, a volcanic world whose core has cooled, Ferno meets Moth, an Enigmuss worker. He and Fross fall headlong for the cutie, and in their Enigmuss disguise are able to kiss one another for the first time, setting sparks flying. In the midst of trying to reverse the weapon Ibi’s set in motion, Ferno, Moth, and Fross must figure out a way to co-exist after their mission is completed…if they survive Ibi’s murderous plot.

Review: Ferno and Fross team up to find out how to stop the damage that is happening to worlds. They meet Moth an enigmuss, who sounded the alarm about Ibi. The sparks fly between the three as they try to stop Ibi’s plans from continuing.

There are a lot of characters at play throughout this story. Gods, a creator and enigmuss, a worker class of people who are influenced by Ibi’s lies. Moth is one two exceptions to this as neither succumb to the hypnotic voice.

I loved that more than one individual is involved in the evil plot as it adds a harder ploy to catch them all as is the case with most other stories. I look forward to reading more about the creator, gods, and the men mentioned that work for the creator that have been mentioned.