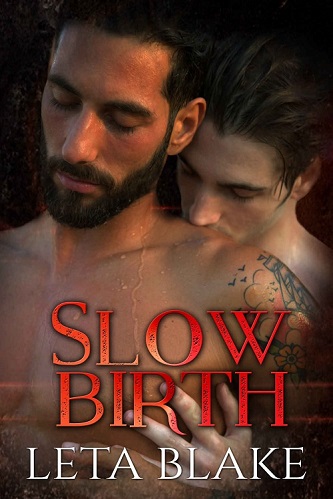 Blurb: Jason and Vale are back in this side story set in the Heat of Love universe!

This is a gay romance novella by Leta Blake, consisting of 50,000 words of bonus material with a strong happy ending for the characters of Jason and Vale from Slow Heat. This bonus story is set in a critically acclaimed, non-shifter omegaverse, with alphas, betas, omegas, male pregnancy, heat, and knotting.

Review: Bitter Heat is the third book in Leta Blake’s Heat of Love series and is told from the perspective of Vale and Jason, who got together in the first book of this series (Slow Heat).

The events in this book start in book two, where it was told from the perspective of Xan, Urho and Caleb, but it is truly part of the story of Jason and Vale. As Blake writes, this book can been read after either the first or second book but it fits better after the second book. If you’ve at least read the first book in this series, Bitter Heat is a must.

I’ve been loving this series. I really liked the depth and character development Blake showed in her writing back in book one and that is something I’ve continued to see throughout this series. If anyone is interested in m-preg and has never tried reading anything yet, this is a good series to start with. The complex characters, deep emotions and rich development had me glued to my ereader.

This book is an Omegaverse book – which is where for one reason or another certain men (the Omegas) have developed the ability to become pregnant. However, since this a relatively recent change in human physiology, pregnancy for men is possibly more dangerous for the men than it had been on women. Due to these limitations, it also means that there are very strict laws dictating how omegas can deal with pregnancy (these laws are analogous to conservative anti-abortion laws which are being shown on the media now).

And that leads us to the continuation of Jason and Vale’s story. Jason and Vale have been together for a few years now and their relationship is strong. Jason is careful when it comes to Vale’s heats – not only is Vale a couple years off of 40, meaning pregnancy has an added factor of danger – but Vale has gone through some true horrors which means that even when he was younger he firmly believed that he could not have children. Jason’s parents have also recently renovated a cabin belonging to Vale, which had been his parents when they were alive. Vale and Jason came the decision to sell the cabin, as it is they already live modestly in the home Vale’s parents owned in the city. However, a blizzard and an unexpected heat – meaning that they did have access to enough birth control – means that Jason gets Vale pregnant.

Vale’s omega instincts and advice from his best friend and trusted doctor, Urho, gives Vale the courage to see if he can go through with the pregnancy to full term, knowing that there is every possibility he could die. As it is the omega laws make it next to impossible to access an abortion, even when the life of the omega father may hang in the balance. On the other hand Jason is afraid. He loves the idea of being a father, but after being with Vale for the past few years he came to terms with never becoming a father, not wanting to risk Vale’s life.

The couple face a difficult pregnancy, which is made more difficult when a influenza epidemic takes hold. Adding further danger to Vale’s pregnancy, a lot of medicine is ineffective at stopping the spread and the deaths from the flu (antibiotic resistance, I really like how Blake takes little elements like this and weaves them into the book). However, with both Vale and Jason ready and willing to support their friends (Uroho, Xan and Caleb), they find some measure of safety during the pregnancy.