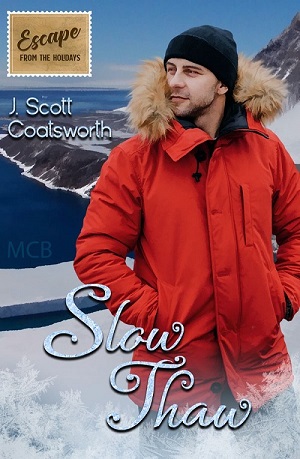 Series: Escape from the Holidays

Blurb: Javier Fernandez is a climate scientist living in a research station near the South Pole. Since his husband was killed in a car crash, he’s preferred to be alone, and is less than thrilled to have a junior scientist thrust upon him by his rich patron.

Review: Slow Thaw is not the book for you if you’re looking for instant passion and sex; it’s a story for those who love an interesting storyline mixed with two men facing an intense situation and discovering their feelings for each other.

Col Steele is excited by the opportunity to work with Javier Fernandez, spending the next six months on the Ross Ice Shelf at Bettencourt Station is a dream come true. It also comes at a time when he really wants to get away from spending Christmas alone. But Javier is gruff and abrupt, and Col has no intention of letting the man walk all over him.

Javier has buried himself away at Bettencourt Station for the last two/three years (depending on which sentence you read); the loss of his husband still haunts him and working constantly is a relief. Dealing with research scientists is his burden to bare and with a new one coming in he’s dreading the man’s behaviour/attitude. But he gets a surprise when Col proves to be helpful and useful, but memories haunt him as Col reminds him of his husband.

This is a really great story that while set around Christmas time isn’t a Christmas story, it’s a story about finding love in terrible circumstances, and of a reminder of what we humans are doing to this world.

The descriptions of the setting is astounding, you can easily picture the ice shelf, of a terrible crack racing towards you as the ice shelf breaks apart, the stunning view of something that has been around for hundreds of thousands of years as it succumbs to human idiocy. It really is breath-taking how J. Scott Coatsworth can transport you into his settings with just a few well-placed words.

The story is set over a short period of time so it’s the beginning of a relationship between Col and Javier, there’s no meeting of the eyes across the ice and falling into each other’s arms, no it’s a small bud of attraction that could become so much more.

I will admit that I would love to see this story developed and expanded on, it would be amazing to read about Col and Javier and the difficulties they’d face as they help to save the ice shelfs.

I recommend this to those who love stories that have challenges for our MC’s, who adore stories where love is a future promise, who love well written storylines and the barest glimpse of happiness for two men who have had difficult experiences.

One thought on “Slow Thaw by J. Scott Coatsworth”