Hi guys, we have Charli Coty popping in today with her new release Speedbump, we have a great excerpt and a fantastic $10 NineStar GC giveaway, so check out the post and enter the giveaway! <3 ~Pixie~ 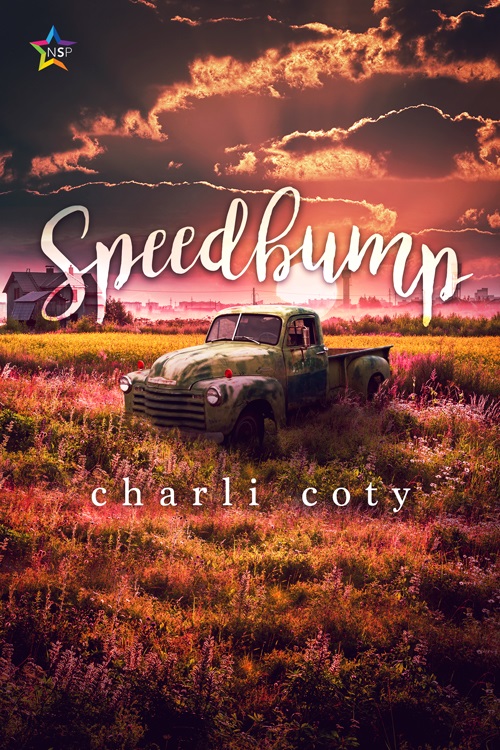 Ezra Cook is sole caregiver to older brother Tray, who was diagnosed with early-onset Alzheimer’s in his forties. They live outside the small town of Drop, Oregon, on property Tray bought with his Microsoft settlement money. For years, Ezra has been going on and off low doses of testosterone to maintain a comfortable level of androgyny. Ezra spends most days juggling Tray’s needs and the work required to survive in rural Oregon on a small income, ignoring their own needs, especially companionship and sleep.

Ellred “Red” Long escaped Drop at seventeen but returns to his hometown in disgrace after his band dumped him on the streets of LA. Coming back doesn’t seem like such a dead end, though, after he sees a guy walking along the side of the road in the rain and gives him a lift.

Ezra and Red’s chance meeting begins an uncomfortable friendship neither had expected, and both allow fear to keep it from escalating into a hookup, or worse, a romance. Red never meant to return to Drop and doesn’t want to get stuck there again, while Ezra’s protective walls may be too strong to breach, from either side.

It had been a while since the last time a moving vehicle hit me, but I wasn’t in the mood to take chances. The night was dark—no moon and only a smattering of stars peeking between the clouds. At least the rain had finally stopped. The county road I was walking along was flat, but I’d just passed a turn when headlights flashed behind me, coming up fast. A blind turn the locals had been known to straighten now and then, especially when the weekend and low visibility coincided.

I ran toward the neighbor’s patched fence, toward safety in the form of a boulder guarding the apex of the turn, hoping whoever sat behind the wheel didn’t mean to run me down. The way my luck was going that night, with the unexpected rain and Granddad’s truck quitting, it surprised me when the car stopped and I was still standing upright.

The GTO—the 1964 stock GTO that I knew to be deep purple but looked black right then—rocked gently and then settled. It rocked again when he leaned across the seat to roll the window down. Even if he’d seen my truck, he wouldn’t know who I was. He’d left town before we moved here, and only one thing about me is at all noteworthy anyway. Everyone knew the day he’d come back to town. Red Richardson—also known as Ellred Long, the name he got the day he was born. Back from Los Angeles where he’d never really made it, but he’d come close enough to be a Big Man in this little backwash town of five hundred (give or take). What he was doing so far off the highway or any of the main roads, I had no clue.

“Hey,” he shouted. Even only hearing him shout, you couldn’t help but know the man could sing. “Let me give you a lift. It’s starting to rain again.”

Slowly, to give myself time to figure out what was going on, I approached the passenger side of the car. I didn’t want to get in—that was trouble waiting to happen if I’d ever seen it—but I wasn’t looking forward to walking for another two hours either. I bent and looked in the window, a safe four feet between me and the car. A blast of warm air hit my face, and I tried not to look too hard at him. He always wore nice button-down shirts, in videos or going to the Mini Mart in Drop—jewel-tone red, purple, black—that looked like silk.

“Where are you headed?”

Even in the dark, I could see his brilliant smile. He probably paid good money for that whiteness. I couldn’t see his long black hair or whether he was clean-shaven or had that short patch of beard he sometimes wore on his chin, but the smile did me in on its own.

“Where are you headed out here on foot in the middle of the night?” Red asked.

We stared at each other another minute, sizing up the situation, and then he reached across and opened the door. He saw a dirty guy, obviously the one who’d filled the bed of said truck with firewood. A filthy, wet, and tired guy who only wanted to get home.

He has no idea.

I brushed off my pants as best I could and slid onto the seat. “Thanks. I’m up the road a couple of miles.”

Red Richardson extended a hand and introduced himself. As though he needed to tell anyone who lived within a fifty-mile radius who he was. I gripped his hand for as short a time as I could get away with and nodded.

“Good to meet you, Ezra Cook.” Red looked me over, and I could’ve sworn he was wondering how much trouble he could whip up for the both of us. If I didn’t know better, I’d have thought he wanted me to pay for the ride with a blow job. Or maybe he was only trying to figure out who I was related to.

That would take a very long time and end the same way as his music career: in disappointment.

I adjusted myself on the seat, pulling my filthy jeans lower across my hips and turning said hips away from him. He shouldn’t be flirting with men, and if he kept it up, I wasn’t above pointing that out. He could get himself killed doing that out here.

Red cleared his throat and gunned the engine. It sounded amazing. His father and brothers had kept the car on the road, probably figured he’d never be back to claim it. Probably prayed he’d never come back to claim it. That GTO was the nicest ride in three towns. Or maybe I liked the whole package—the sexy washed-up musician driving a fifty-year-old muscle car.

He pulled back onto the road, his headlights illuminating a whole lot of nothing in front and to both sides. The silence stretched out too long, something that wouldn’t have bothered me any other time or place.

“You’ll see a big red mailbox on the right.”

Red chuckled. A quiet rumbling, tuned to perfection like the car. “Your folks live out here long?”

That got my hackles up, but no sense in going down that road. “No. We moved to Drop in the early aughts.”

He darted a look in my direction—at least that’s what it probably started out as. Red couldn’t tear his eyes off me, which should’ve felt more like trouble than it did. Denial. It’ll get you every time.

“You know. The first decade of the twenty-first century. Aught one, aught two…” When I realized I’d actually been speaking to him like he was anyone else—like we were two regular guys in a car, nothing unusual, nothing out of the ordinary to see here—I caught my tongue between my teeth and bit down. Not hard, I’m no masochist, just hard enough to remember why I should shut the hell up.

“How old are you?” He chuckled again. Damn him. “My father says that, but I didn’t think anyone under sixty used that term.”

“Interesting. Because I’ve always heard the opposite. About me, anyway.”

“That I’m immature. A hopeless man-child.” He laughed and took one hand off the wheel. My attention fixed on that hand as he rubbed his thigh and then gripped it. His laugh sounded embarrassed and like he was bragging at the same time. I needed to get out of that car before I got myself in trouble.

“You can drop me anywhere. I don’t want to put you out.”

Red rubbed the thigh of his jeans again, maybe to dry a sweaty palm, and then returned his hand to the wheel. His concentration seemed to focus on driving and the road outside the windshield instead of on me. Disappointing, but for the best. Even if he did keep flirting—if that was really what he’d been doing—it wasn’t like it would have gone anywhere. Rock stars didn’t get involved with…people like me.

I’d just raised my hand to point out the mailbox when he slowed to take the turn. His cocky grin made me want to adjust my pants again, but I was afraid we’d end up in the ditch if I did. Red roared down the half-mile stretch of dirt and gravel that passed for our road but stopped the car without making any ruts. He might be cocky, but he was no asshole.

Great. I’d sort of hoped he was.

He stopped in the turnaround near the front porch, and before I could even say thanks, the front door burst open. My brother stormed out and didn’t stop, yelling at the top of his lungs about something. All he wore were battered and ripped jeans—the hair on his head and chest looked white in Red’s headlights and wild like he’d been asleep on the couch. His enormous feet were bare. I jumped out before the car had stopped rocking.

“It’s me—Ezra,” I shouted over him. “Tray, the truck broke down, and Red here gave me a lift home.”

Tracy stopped and glared at the car, both hands locked in fists. He didn’t move or say another word, which was probably for the best considering he’d been woken up by headlights to find out I hadn’t made it home.

I closed the car door and looked at Red through the open window. “Thanks for the ride.”

“You going to be okay?” He looked between Tracy and me a couple of times. Clearly, he thought the answer was no.

“Yeah. It’s my brother. The car must’ve woke him up. We don’t get a lot of traffic back here, that’s all. Thanks again.” I stepped back and gave him a little wave. When he didn’t head out right away, I took Tray’s arm and started up the porch steps. Tracy didn’t make it any easier—he twisted at the waist to look back, no doubt trying to figure out who was crazy enough to drive down his road. Even FedEx and UPS had Tracy Cook’s place listed as a no-fly zone, so we had to drive over an hour into Portland to pick up any packages. When we got any packages, which didn’t happen much.

Nobody would’ve sent any presents to the Cooks’ two black sheep, even if they had found us again. Charli misspent a large chunk of her youth on the back of a Harley, meeting people and having adventures that sometimes pop up in her fiction. She grew up in the San Francisco Bay Area during a drought, and found her true home in the soggy Pacific Northwest. Charli has survived earthquakes, tornadoes, and floods, but couldn’t make it through one day without stories.

Charli Coty is a pseudonym of the author known as Charley Descoteaux.