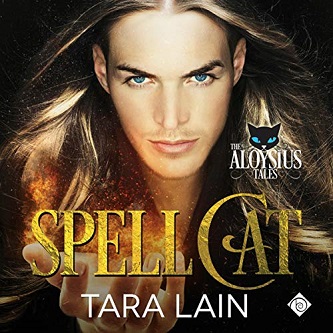 Blurb: When Killian Barth, history professor, meets Blaine Genneau, quantum physicist, they ignite their own big bang. But Killian can’t pursue a physics professor – or a human. As the most pow-erful male witch in 10 generations, Killian must bolster his dying race by reproducing – despite the fact that he’s gay.

Even a fling with Blaine is out of the question, because Killian has been told sex with humans drains his power. But if that’s true, why can young human Jimmy Janx dissolve spoons with the power of his mind? If Killian can sort through the lies he’s been fed, he’ll still face his biggest obstacle – convincing rational scientist Blaine to believe in magic.

With his ancient and powerful cat familiar, Aloysius, on his shoulder, Killian brings the lightning against deceit and greed to save Blaine from danger and prove love is the greatest power of them all.

Review: Spell Cat is the first book in Tara Lain’s paranormal romance series, The Aloysius Tales. This narration is actually from the recently published second edition from Dreamspinner Press. Before coming across the audio of this story, I’ve not read either edition of this story. However, I thought the plot sounded interesting and more often than not I’ve really enjoyed Lain’s work (probably with a preferences towards her recent stuff than the older stuff).

The narration of this book was performed by KC Kelly. Who did a good job, creating tones and voices not only for the two MCs, but a whole host of minor characters, which also included a couple “European” and “Russian” type accents. It was honestly a great performance and I think this is one of those books where I wouldn’t enjoy as much if I simply read it book myself.

I will admit, I did a bit of research, because from the blurb I found it confusing as to why the series was called the Aloysius Tales. Then I actually started the book and then I realised: Aloysius is the name of the damn cat.

The story starts with Professor Killian Barth, a history professor who specialises in the history of witchcraft. The subject he teaches is popular – from kids wanting easy grades to others who find it cool to study witches. He also happens to be a bona fide witch, the most powerful witch for 10 generations and is known as the witch master, a powerful figurehead in the community. The witches are dying, the witch elders telling everyone that this is because witches have been diluting their powers by “mixing” with humans. And being the most powerful male witch means that his power-hungry mother and another power-hungry elder, have orchestrated an arranged marriage between Killian and the most powerful female witch to ensure the purity of the witch line. The biggest issue being that Killian is gay.

This makes Killian a heart breaking figure because he has never allowed himself some measure of happiness. He has been told his whole life having sex with humans will deplete his powers and make him weaker, yet he is comfortable and prefers to be in the human world. Perhaps worst of all, when he meets physics professor Blain Genneau, there is an instant spark of attraction between the two men. Which only serves to make Killian more miserable.

The story, shortly after Killian is introduced to his new familiar, the black cat Aloysius, is Killian’s battle to be find out what exactly is behind the whole “humans deplete a witch’s power”. All to find a way out of his arranged marriage and maybe even find some kind of happiness, no matter how temporary. Killian is definitely the main character here, although Blaine I felt got about as much “air time” as the secondary characters such as Killian’s fiancé Lavender and Killian’s strange student Jimmy Janks. In some ways that didn’t feel very fair to their romance, but for the overall story it worked that this was predominately told from Killian’s POV, and Killian has a lot of thing going on.

I recommend this one to those that love paranormal fiction, in particular those that like witches and magic. This is a first in a series which follows the influence of familiar Aloysius on the witch community and the love lives of a select few. I’m keen to hear or read more.