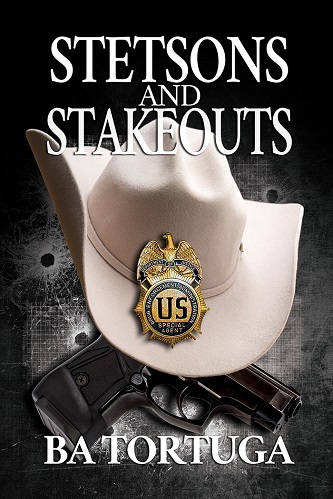 Blurb: Gianni Cesare is a DEA agent and rancher—who also happens to be a millionaire heir to an Italian count. Running a multiagency sting out of his East Texas ranch means he needs a new foreman… preferably someone a little wet behind the ears who won’t ask too many questions.

Gianni’s Aunt Jerilyn hires Bonner Fannin, a roughstock rider with zero ranch experience and a sister who’s pregnant with a violent biker’s twins. If that’s not bad enough, Bonner is pretending he and his sister are married to protect her and to help get him the job.

Gianni didn’t think Bonner was the marrying type during their torrid beach affair years ago, but he’s not sure if he has time to explore that thought now, as overrun as his ranch is with drug cartels, macho government agents, and local cops. Looks like Bonner and Gianni are both in over their heads, and they may have to band together during this adventure to swim rather than sink.

Review: Stetsons and Stakeout is a standalone novel by BA Tortuga. Stetsons and Stakeouts is a little different to what I’ve read by the author in the past, though has the same basic elements that are familiar with their writing. It’s a real fun cop adventure, action type of story, with a good dash of danger and a real sweet (and sexy romance). All around it’s a totally enjoyable read. It is also everything that I would expect from BA Tortuga, whose books I now absolutely adore and class them as a must read. I find that I really connect with Tortuga’s writing style (I don’t think I did at first, but I definitely do now), and I love the chemistry created between the characters and their depth.

Stetsons and Stakeouts is the story of Gianni Cesare and Bonner Fannin. The two men are complete opposites of each other, but at the same time they are completely perfect together, their chemistry on the page was fantastic. Gianni has a bit of an interesting CV: DEA agent, rancher, millionaire as well as son and heir to an Italian count. He uses his background as an Italian to his advantage when it comes to his work, although he is quite firmly an American who just happened to grow up in Italy. He also owns his mother’s share in the family’s ranch, where his aunt who owns the other half, lives. Gianni loves his zia and the ranch, however, work has kept him away. Until now, a big case involving drugs from Mexico, biker gangs and the like (it’s always drugs and weapons in books) takes him back to the land. On the land we also get to meet two of Gianni’s childhood friends, the town sheriff and an ex-military man who was injured in the service, who quickly come to help Gianni in the big case.

Gianni also meets Bonner. Bonner is essentially in hiding with his little sister, a nineteen year old young woman who is pregnant with twins and needs to get away from the baby daddy. Bonner is hired by Gianni’s aunt and when the two men meet, the sparks begin to fly instantly. However, as their worlds collide danger comes to both men and their families, as Gianni and his people try to unravel and solve the case.

I really enjoyed this story, the MCs are wonderful and work well together, but I also really enjoyed the minor characters that all had their role to play in Gianni’s mission. I really do hope that we get to hear from Gianni’s two best friends, or even one or two of his co-workers, because the glimpse I got of these characters was wonderful and has me curious, wanting to know more about these guys.