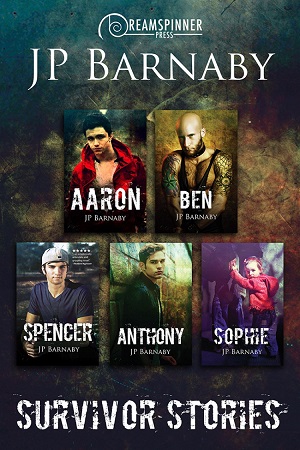 Blurb: Sometimes it takes everything just to survive….

In Spencer, Aaron and Spencer are still struggling to build a normal relationship, and when Aaron must testify against his attackers, can Spencer be what Aaron needs during this crisis? In Anthony, Aaron’s younger brother Anthony is tired of being invisible and heads to Detroit, where he encounters Brendan. Thrown together by fate and betrayal, they will have to find comfort in each other. And in Sophie, Spencer’s beloved Nell has died and left him custody of her three-year-old daughter Sophie; when Nell’s ex comes to claim Sophie, Aaron will have to decide if he can stand beside Spencer in his biggest fight yet.

Review: The first book in this bundle is about Aaron and his life after a brutal attack that leaves him scarred, emotionally damaged and forever changed. He suffers from PTSD, has OCD tendencies and is deathly afraid of human contact of any kind. I totally understood after reading what he went through. My heart broke for the young man forever changed by one brutal thoughtless attack that leaves one dead and one broken. Until he meets Spencer and starts coming out of his shell with his help.
In Ben, Benjamin is Juliette’s brother, Juliette was murdered in the first story Aaron when her and Aaron were attacked. Ben is struggling against the guilt he feels over her death. Driven to want pain to make himself pay for the guilt he feels over her death. Jude, his roommate, loves him and eventually shows him how to love.
In Anthony we see Aaron’s little brother spiralling out of control as anger and frustration sets in. He runs away thinking no one will care. His mother should have shown some attention instead of leaving him alone focusing on Aaron. I seriously did not like that. I was glad when he found Patrick and Brendan when he left as his situation could have gone so wrong if not for them. Brendan was just as broken as him. They both helped the other heal.
In Sophie, Aaron has a choice to make. Fight to keep Sophie or turn away. I loved that he overcame his fears and fought at Spencer’s side for this adorable child.

I loved the whole series but I will warn you there are mentions of rape, murder, torture to an extent. So not the hearts and flowers romance one might expect.

It’s a collection of learning to cope and survive and come out on top different but eventually better than you were at one time.