Hi guys! We have Gemma Gilmore popping in today with her new release Sweethearts, we have a great excerpt and a brilliant $10 NineStar GC so check out the post and enter the giveaway! <3 ~Pixie~ 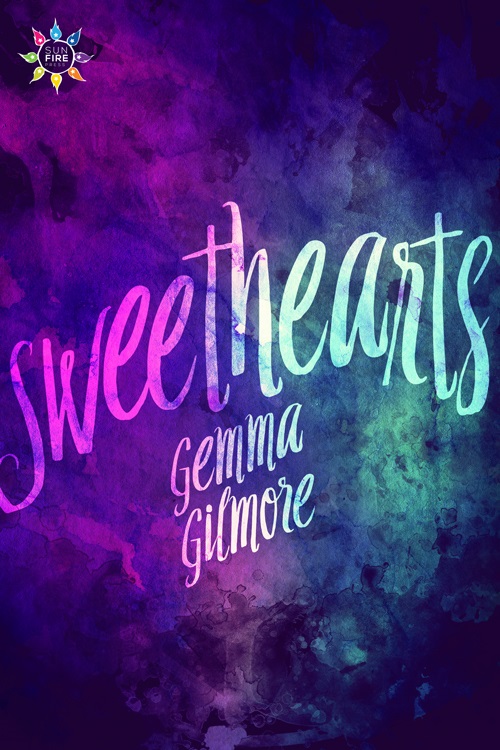 When seventeen-year-old Ingrid Harper realizes she may not have the talent to pursue a scholarship for the most prestigious art school in Australia, she turns to pink hair dye as a distraction.

Her new hair captures the attention of a fellow art student, Kat, who introduces Ingrid to the LGBT clubbing scene, and although Ingrid enjoys partying with her new friend, she becomes caught up in confusion about her sexuality. Her fear is overwhelming—she can’t think about anything else.

Until her best friend, Summer, reveals that she is pregnant.

As her best friend faces the realities of being pregnant at seventeen, Ingrid is shown the true definition of courage. It motivates her to come out about her sexuality—she likes girls. Only girls. Now she just has to work out what that means for the other areas of her life.

I am desperately trying not to attract attention.

My arms are folded across my chest. My chin is tucked into my neck. I am leaning against the brick wall as I watch her sing. It takes every ounce of strength I have to keep my face still, hiding any expression that bubbles to the surface. Any reaction I have to her lilting voice is shoved down, adding to the pit in my stomach.

The younger students are sitting respectfully in their seats. They are still too naive to question the teachers when they are told they must be present. I know better than to think that this school performance is anything special to Amber Freeman. She’s been singing since before she could walk, and although I am always the first viewer, her YouTube videos are gaining more and more popularity with every upload. This is just practice to her. A warm-up.

The spotlights are trained on her, and she throws her hands up whilst the climax of the song cascades from her talented lips. I let my eyes flicker shut and Amber’s voice surrounds me, caressing my ears as she sings deeply. Her voice is crashing through me, tingling across the skin on my arms and seeping through my body, calming me.

My head has fallen back against the wall, and I remain frozen there as I listen to her sing. In this moment, nothing else matters. With my eyes closed, she’s right next to me. Singing softly, untying the knot that’s sunken deep into that pit in the bottom of my stomach.

“Ingrid? What the hell are you doing?” The voice that hisses right next to my ear jerks me out of my daydream.

I jump with shock and wrench my eyes open, tearing myself away from the peaceful moment. In front of me, my best friend Summer stands, her arms folded across her chest and her eyes wide in that you are busted expression.

“Jesus,” I mutter. “I thought you had better things to do than sneak up on people. Way to give me a heart attack.”

“I thought you had better things to do than stand here creepily at the back of the gym listening to Amber sing,” Summer challenges me, an amused smile dancing across her full lips.

The quicker I can get Summer outside of this gym, the quicker I can shove away the fact that she caught me watching Amber’s performance. We duck behind the last row of seating and out of the door in the corner of the room, swiftly ignoring the Emergency Exit Only sign. We’ve done this so many times now that it’s like second nature.

Outside, the rain lashes against the building. The wind howls so loudly that I’m surprised no one noticed our little escape from the gymnasium—then again, they never do. For Summer, there’s more to life than just sitting in a desk at school. Any chance my best friend has to escape the mundane restrictions of life is an opportunity she must take. She’s never been the kind of girl to follow the traditional paths.

Then again, neither have I.

My thoughts still spin as we duck through the car park and head out to the tin shed at the back of the school. Summer knew exactly where to find me during Amber’s performance. She knows that I watch Amber. While everyone else in our grade snuck off to make out in abandoned classrooms or smoke cigarettes behind the main building, I followed the crowd into the gymnasium with one intention.

Why did I need to watch her?

“I had a headache and the gym was dark.” I shrug off Summer’s curious stare as we take shelter under the tin roof. The rain really lashes down now, bouncing off the pavement and whipping through the trees. “It was better than watching you make out with Jackson for an hour straight.”

My snide comment is low but, right now, I’ll do anything to take the attention away from me.

“You had a headache, so you decided to listen to Amber sing?” Summer rolls her eyes at me. “Makes sense.”

She fidgets with her oversized tartan scarf, staring out into the rain. Maybe I’m not the only one who is trying to avoid things today.

“You were in there too,” I argue half-heartedly. “What’s your obsession with her?”

This time, Summer does turn to me. “I’m obsessed?” She snorts. “Ingrid, honey, if I’m obsessed, then you’re deranged.”

Summer rolls her eyes, signalling the end of that particular conversation. “Whatever. Your deeply disturbing issues are the least of my problems right now. Look, Ingrid, I think I’m going to have to take a test.”

Red splotches gleam against Summer’s pale cheeks, and I watch her carefully. She tugs on that scarf like it’s strangling her.

“Are you stupid?” I know her voice is harsher than intended, and I brush it off with a blunt laugh. “A pregnancy test.”

“Oh, for god’s sake, here we go again. You and Jackson really need to invest in some efficient birth control because this I’m pregnant freak-out that you have every month is getting boring.”

“Trust me, I know.” Her tone is suddenly tense, and she blinks back emotion. “But right now, I’m pretty sure I have the devil’s spawn growing inside of me, so I’m allowed to freak out. I’m two weeks late.”

I raise my eyebrows. She’s never been this late before. “Jackson is not the devil’s spawn. You know he loves you. But I highly doubt you’re pregnant. It’s all the stress from thinking you’re pregnant every month starting to get to you.”

“Yeah, okay, whatever.” She says, throwing her hands up in defeat. “I knew I shouldn’t have said anything. I don’t know what you’re moping about—we got a free class and you got to watch Amber singing. It’s a damn good day for Ingrid Harper right now.”

“Listen, I really did just have a headache. I don’t care about Amber’s singing. And you and Jackson were quite obviously distracted. You didn’t seem to have pregnancy on your mind during that public make-out session. Or maybe you did. Either way, I think it’s a damn good day for both of us, don’t you think?”

I know what Summer is doing. She is the ultimate denier of reality. More than that, she is aware that I will follow along with every topic change she throws at me. I get distracted easily, apparently.

Summer laughs, but the smile doesn’t quite reach her eyes. Distraction is inevitable right now, for both of us. These are not issues we should be faced with at seventeen years old. Summer’s mother is getting married soon, so that’s just one more thing to top off what I’m coining Summer’s Distressing Summer.

We stand silently as the rain pours over the sides of the flimsy tin roof. Muddy water pools right to the edges of the door. It’s mid-December. While politicians are throwing around the term climate change like it’s currency, I stare at the pools of water near this emergency exit, wondering if our town has sufficient flood safety plans.

“You’re buying me McDonald’s.” I sigh in return. The truth is, I have my own things to worry about, whether Summer is pregnant or not. She’s been with Jackson for three years—that’s three years they have successfully been together and prevented pregnancy. It’s not a possibility. It just isn’t.

Summer is wild, just like her name. Her light-brown hair is constantly tangled, but her dominating blue eyes seem to distract everyone.

But today, she stares out at the grey sky and nervously chews at her lip, clutching that damn scarf so tightly that I know she’s already certain about this pregnancy. More so than I’ve ever seen before. Her blue eyes don’t seem so bright today.

“I heard Jackson was thinking about transferring to the art school. I didn’t think that boy had an artistic bone in his body.” I smirk, desperately trying to relax Summer. I don’t know what to say when she’s so shut off like this. My lie is smooth, slipping off my lips easily.

“Yeah, he does comics. I don’t know, I guess they’re funny.”

“It’s our last year of high school. Surely he’s left it a bit late?” I frown in earnest now.

What Summer doesn’t know is that I’ve known Jackson a lot longer than she has. I know that he’s been wanting to do art since he started high school, but his military-driven father would never allow it—he’s all about physical education, mathematics, and science. He used to drill that into Jackson every time I was around; none of this fairy fluff nonsense, he would say pointedly.

“Look, Ingrid, I don’t really want to talk about Jackson right now,” Summer snaps, finally releasing the titan grip on her checked scarf and running a frustrated hand through her frizzy hair.

“Do you even want me to stay tonight then?” I throw back. “I can’t deal with you when you’re being like this. Either let me in or let me go. I’ve got shit to do.”

To my complete surprise, Summer snorts as she turns to face me. “Just shut up and come and sleep over at my house. I need your brutal honesty, but I also need you to do literally everything I say right now. You know I’d do the same for you.”

I don’t bother telling her that to be in her position, I’d actually have to get closer than two feet to a guy, but I think she already knows that.

“Look, I don’t like that you called Jackson the devil before. I don’t care if he’s annoying sometimes, if you are…pregnant…it’s definitely not the devil’s spawn that could be growing inside of you. And that’s all I’m going to say about that,” I huff.

“Okay, I didn’t know you were Jackson’s number-one cheerleader, but whatever.” Gemma Gilmore is graduated from university with a degree in Journalism and a passion for writing and travelling. In 2016 she was awarded a highly competitive residency with the Tasmanian Writers Centre. When she’s not writing YA fiction, she’s spontaneously booking trips across the world so she can draw inspiration from new cultures and places.