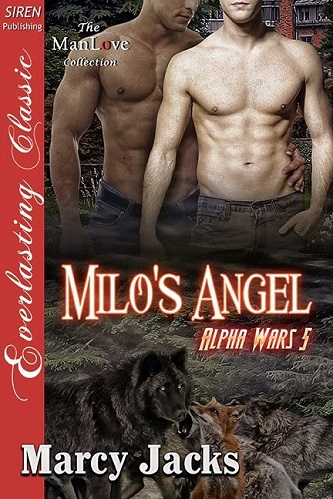 Blurb: Milo can’t remember a normal life outside the farm. The vampire blood farm. He knew it wasn’t right, he knew there was something out there better for him, but he never had the chance to escape, or to know a proper life. His feelings for Orin, the dominant wolf shifter who arrived out of the blue, who looked at Milo with such heat, made him want to live again.

When Orin pulls Milo out of the vampire farm, he can barely let himself hope for something with the other man. One kiss is all it takes to let Milo know this is the real deal.

And then Orin abandoned him.

Heartbroken, Milo never thought he would see him again, so when Orin returns, broken and on the brink of death, Milo will do what needs to be done to return the favor to his mate, and get his answers.

Orin saved him, Milo now needs to save Orin.

Review: I loved this story of Orin trying to do what is right and Milo demanding to stay by his side when Glendon banishes him from the pack for what he did to Jake. Milo was a sweet, timid fox shifter saved from the vampire blood farm by Orin.

He’s also Orin’s mate. Along with the struggle still between Fergus and Parker and the two disappearing after vampires attack while they are out made for an interesting story. Title: Chained at the Hip

Blurb: Owen Wilson (yes, just like the actor, don’t mention it) has spent the last six months of his

life in a vampire blood farm. He’s on the verge of giving up until rescue comes from an unlikely source: Alpha werewolves.

Great, not only do vampires exist, but werewolves, too? Though he can’t complain, they are rescuing him, and one of them heats Owen’s blood in a way he never would have thought possible.

Hugh Greywolf was just doing a routine take down of a vampire farm with the rest of his pack. He never in a million years would have thought he’d find his mate in that horrifying place. Owen is skinny and malnourished, but Hugh needs to make the claim. Enjoying their mating might come to an end when the vampires track down their stolen cattle, and when they come for Owen, Hugh might be too late to keep them from bleeding Owen dry for good.

Review: This story starts with Hugh and Fergus already at a vampire farm. How they got there I have no idea. This question plagued me all throughout the book as I felt I missed something. Owen has been in the vampires clutches for ix months and is practically dead on his feet.

Sparks fly when these two meet. Hugh takes care of him and explains what is going on. Owen is happy to be with Hugh, then during a hunt Owen is almost killed by a vampire.

We are introduced to Trey, Owen’s friend. But still do not get a lot about the man. Blurb: Jake Kelly didn’t expect the world’s most gorgeous man to walk into the cafe where he worked. But what are the odds he would be gay, or interested in a skinny, overstressed barista who was clearly out of that man’s league? So he’s shocked when Glendon introduces himself and asks him out on a date.

Jake has never been happier, until his boss dumps an extra shift on him, forcing him to cancel, and a creature attacks him while taking out the trash. FML, can this night get any worse?

When all hope seems lost, a huge wolf comes to his rescue, and transforms into Glendon. He’s an alpha werewolf, and he’s in a thousand year war between the vampires and werewolves.

Now that Glendon found his mate, the vampires will stop at nothing to get what they want from him, including killing Jake, and coming after the unborn child Glendon has every intention of putting inside him.

Review: When Jake meets Glendon he thinks his life is turning out better than he expected until he is attacked after work. Coming to in a house he is unfamiliar with sets his nerves on edge until Glendon explains some things.

This story introduces us to a whole cast of characters and how things are in this world of vampires and werewolves. Although I liked the story it felt as though information was missing and the story felt rushed. I have already read the next book and even though it is connected there is a huge gap between this book and the next.

I wanted more details into the planning of the war with the vampire queen and none of that happened. Jakes friend is also in this story along with Fergus who had to bite him to save him from a vampire bite. These two are at odds with each other.