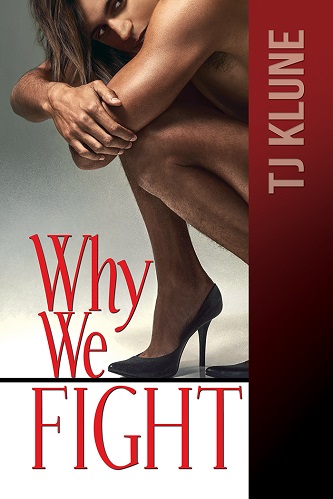 Title: Why We Fight

Corey Ellis sure doesn’t. Oh, everyone around him seems to have found their happy ending, but he’s far too busy to worry about such things. He’ll have plenty of time for romance after he survives his last summer before graduation. So what if he can’t get his former professor, Jeremy Olsen, out of his head? It’s nothing more than hero worship. And that’s the way it should stay.

Except bigender Corey—aka Kori—is interning at Phoenix House for the summer, a LGBTQI youth center. A center that recently hired an interim director until someone can be found to fill the position permanently.

Because life is extraordinarily unfair, the director just so happens to be a certain former professor, now turned current boss.

Desperate to keep things professional as he and Jeremy grow closer, Corey makes a major mistake: he turns to his friends, Paul Auster and Sanford Stewart for help.

But Paul and Sandy have some ideas of their own….

Set in the summer of 2016, Why We Fight is a celebration of queer life and being true to oneself… no matter the cost.

Review: Why We Fight is the fourth and final book in TJ Klune’s At First Sight series. But it is also so much more! I make no bones about my absolute adoration for what Klune writes, so I am going to keep my gushing to a minimum. However, this book signifies wrapping up one fantastically fun, emotional and heartfelt series (At First Sight), with direct connections with characters from another completed series (Bear, Otter and the Kid), and for the very keen, he has thrown in some Easter eggs to another recently finished series (How To Be), TJ goes above and beyond with the fan service for all Klunatics. This book does not work as a standalone book, despite the fact that we are getting the story of a character who, in the previous books, was a wonderfully sassy friend that I gotta say, I fell in love with. Also, if you haven’t read the read the rest of the series, then why not??

TJ has also been writing about various aspects of the story and his process in his blog lately, and it has been a fascinating read. Any fans of his works that haven’t checked out the blog, do so, it’s really interesting to read about how he wrote the character of Corey/Kori, as well as talking about gay conservatives and all the other little touches he’s furnished Why We Fight with.

The main characters are Corey Ellis and Jeremy Olsen.

Corey is a really interesting character in that they are a person of colour, as well as identifying as bigender, meaning that sometimes they embrace their male side and are Corey, but then at other times they embrace their female side and are Kori. TJ has written this aspect wonderfully, in previous books we knew when they were Corey and Kori because we were often told how the pitch in their voice had changed or what they were wearing. Here, because the story is told entirely from Corey/Kori’s POV, the only time we would know was when clothing was mentioned or when someone addressed them. But honestly, it didn’t matter if it was Corey or Kori on the page, they are a character that I love because they could just be and that was it. I didn’t care who they identified as, I just got immersed into their life.

Jeremy Olsen is also an interesting character, even if he doesn’t appear to shine as brightly as Corey/Kori does. He’s a college professor, which is how he had first met Corey/Kori who was his student at the time. But now life seems to be throwing them together on purpose and Corey/Kori does not know how to handle it – but they handle it wonderfully, hilariously wonderfully, and beautifully and heartfelt wonderfully. It doesn’t help that despite his concerns about their age difference that Jeremy seems to intent on making a good go of things.

Jeremy is already in Corey/Kori’s orbit when the story starts, we know this from the previous book in the series, where Jeremy turns up at the wedding of one of Corey’s friends, Vince and Paul, with Jeremy’s father, who happens to be dating the elderly gentleman, a leather daddy called Charlie. Now, though, we now add to this that when Corey/Kori takes an intern position at a LGBTQI+ home, they finds out that Jeremy has been made interim director.

The secondary characters are as wonderful and as outrageous as they have been throughout the entire series. Sandy, who is also drag queen Helena Handbasket, is as sassy and as bitchy as ever. Paul is a dramatic as ever. Darren and Vince just put up with adore their significant other. However, I particularly enjoyed the story between the two older men, Charlie and Robert. Despite Paul’s parents being the centre of the big family that is created in this series, Robert is Jeremy’s father and Charlie is best friend/father figure to Corey/Kori. Ultimately, like many of TJ books, this series shows that families are not just blood relations, these are the relationships that have been built over time and while they may fight, they are hilarious and completely zany, but they also support and love unconditionally.

Fans of TJ Klune will be in love. I know for sure that Klunatics on TJ’s Facebook fan group are so excited for this book and I assume that there are many others that are excited to. However, if you’ve just been a fan of the series, I think you will finish this one satisfied.

For those unfamiliar with the series in general, these are romantic comedies with some of the most interesting and zany characters. Explaining it to someone who doesn’t know about the books or Klune’s writing, I think in simplest terms it is like a rom-com, a very diverse rom-com with gay main characters, including a drag queen (Sandy/Helena), an overweight guy with a flair for the dramatic (Paul), a couple of homo-jocks and one is the king (Darren and Vince), a bigender person of colour (Corey/Kori), an aging leather daddy (Charlie), a no nonsense professor (Jeremy) and his very dapper father (Robert), a very liberal grandmother who I suspect might write those weird wiki-how pages (Nana) and a parrot that does nothing but swear (Johnny Depp the parrot).