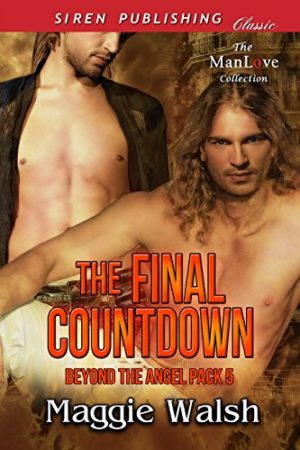 Series: Beyond The Angel Pack 05

Blurb: When Nicco found his mate at the age of sixteen, he knew he could not claim him. Thad was too young for him, but that didn’t stop Nicco from checking in on his mate. One day, Thad comes to Nicco to say goodbye and inform Nicco that he is leaving. The pain of losing his mate, even without claiming him, is too great and Nicco is forced to turn to a witch to place a spell on him to block the agony, so that he could go on.

Now, eleven years later, a stalker terrorizes Thad, and he turns to ParaSafe for protection, but he is unprepared for the cold man his mate has become. Realizing that it has to be the spell that is causing Nicco’s strange behavior, they must find the witch in time to reverse the spell so that Thad can stand by his mate in the upcoming battle, or they will all be doomed.

Nicco and Thad had met when he was sixteen, to young to mate. Time goes by and Thad’s life gets a bit harder. When Nicco found him living on the streets he brought him to the coven and things were going great. Till Thad decided he wanted to be a famous singer. What neither had realized was there was something paranormal behind it.

Thad is about to get the biggest shock of his life. Here he is on the run from someone stalking him and killing his band mates. Only to end up in the one place he always knew he believed to belong. To bad Nicco is acting completely out of character and the stalker has found him. Some magic is going around and it is not all good.

Maggie has given us another amazing story. It caught my attention from the start and kept it all the way to the end. I was glad to find out what was behind Nicco’s odd behavior and to know it had not been from someone evil. This story gave me excitement, adventure, danger, mystery, surprises, magic and some hot sexy times. This is one of those stories that will be read more than once.

I had a blast reading it and can’t wait to get my hands on Maggie Walsh’s next story. I would definitely recommend it.

Until one day their world was ripped apart by deceit and betrayal.
A threat to their son’s life caused Ryland to send him away into hiding, in hopes that he would be safe. When Phenex arrived home to find his mate in the arms of another man he was hurt and angry, but when he found that his mate had taken his son from him, he was enraged. Phenex turned his back on his mate and walked away from their mating.

Twenty six years later, they have found their son, but the horrors he suffered his whole life cause Ryland great pain and guilt. To ensure that their son Jesse has his full powers, these two strong leaders must find a way back to each other.

Review: This book is part of a series and should be read in order. Also coincides with the Angel Pack Series.

One thing I really like about both series is that they are not just about one mating. The reader also gets snippets from the other established matings, as well as other characters who are not yet mated. I like being able to revisit with those already mated and get a sneak peak of future stories to come.

In this book the full truth is finally revealed about why Ryland did what he did with Jesse as a child. Phenex is able to also tell his side of things. I really enjoyed the story about Phenex and Ryland. It was about time they got back together.

I really felt for Ryland. He did what he thought was right with the information he had. Things worked out differently than he hoped, but not due to his fault. That didn’t mean he didn’t feel guilt. Phenex was in no better a spot. They were so mislead. It was good that they were finally able to clear the air and make things right between them.

This book was also showed the evolution of Jesse and Micah. It showed not only Jesse’s growth of power, but also their relationship.
I must say this book was full of hot sex scenes. Not just with Ryland and Phenex, but also Jesse and Micah. These couples are seriously smoking hot with a nice little amount of kink thrown in.

And DAMN, Malachi is one evil bastard, and turns out he is not working alone. Yup, there is another fucktard helping Malachi. I really cannot wait to see what happens to these two when they finally get their asses kicked. Plus there was another little surprise cameo.

I enjoyed this addition to the Angel Pack world and look forward to reading future books. I really want to know what happens with Crew especially.

Blurb: When vampire Dom Viktor, second in command for King Dante Calabrese, meets his natural-born submissive mate, Adam, he wants nothing more than to claim him, but he cannot as long as Adam is bound to his witch, Rory.

They set out on a journey with some of their Angel Pack friends to find a way to break the bond, but the spell they need is known by only one living witch, the mysterious Zane. Along the way they meet some new allies and enemies. When Adam takes it upon himself to follow a lead and goes missing, Viktor turns to his friends to help him find his mate and bring him home safely.

A new witch in town stirs up trouble as she tries to snag one of the mated wolves as her own and Alpha mate Jesse leaves the pack to find a way to deal with his newfound powers. Viktor tries to save Adam in time and bring him home where he belongs.

Review: This book is part of a series and should be read in order. Also coincides with the Angel Pack Series.

Viktor is the second in command of King Dante. Since Dante has found his mates, Viktor has been taking more responsibilities in ruling the vampires. He is happy for his king, but also feels a little jealous. When he discovers his mate’s scent on a sweater in the king’s office he immediately goes to the king to find out where his mate is. This leads him to the Angel Pack house where he comes face to face with his mate Adam.

Adam is the bound familiar of witch Rory. He is a natural submissive who must obey whomever he is bound to. Since he is already bound to Rory he knows he will never have a mate, or at least he is not supposed to. That all changes when he meets Viktor.

Both Viktor and Adam fit perfectly together. They both have the same sexual interests and want to complete their mating. But the bound to Rory is in the way of them being completely together. Luckily as they work on a way of breaking the bound, Viktor and Adam still find a way to be together whenever they can. Adam is adorable and Viktor is the big bad Dom. They were both cute and damn sexy together.

This book was half about the relationship between Viktor and Adam. The other half was about the ongoing story arc involving the paranormal world and changes taking place. It also gives more information about what the Angel Pack and their allies are going up against and what it all means. So a hell of a lot of things get revealed and happen. I mean a lot.

This book kept me on my toes as I wondered what would happen next. New characters are introduced. The reasons behind Malachi and who he is gets told. There is also more explanation about the prophecy and what is all means to the paranormal rulers and their mates. And still there is more. Like I said a lot happens.

This book was a bit of a rollercoaster ride. There were ups and downs all over the place. It answered a few questions as well as brought up even more. I can’t wait for the next book in this world to see what happens next.

Wolf shifter Dale Cole feels an overwhelming sense of guilt after all the underhanded things he was forced to do by his evil sister and father. Dale feels he has no other choice than to leave this world.

Dragon Lord Dare Davis has been hiding in the fae realm for over 1,000 years after his race was nearly wiped out. He has learned to close off all emotion and just live his life for the next battle. But when the three can’t come together because of Dare’s inability to show or feel emotion, Dante banishes him from their lives in hopes of keeping Dale safe and happy.

Dare must find a way to show his mates that he can change and that they can depend on him. But Dante and Dale have trouble forgiving and forgetting.

Review: This book is part of a series and should be read in order. Features characters from the series The Angel Pack.

Dale has never had a good life, until he came to the Angel Pack to spy on them for his father and sister. Which made all the things he did to them that much worse for Dale. The guilt was slowly eating him alive. When he has finally has come to a decision to end his life he meets two men who claim to be his mates. But even than things are far from perfect.

Dare… I did not like him for a good part of the book. He was an emotional wasteland. Of course there are reasons, but still until they are revealed he sucked as a mate. He was distant, uncaring, and just a plan asshole to both his mates, but Dale most of all. He was not understanding of Dale’s needs, and he didn’t really care until he almost lost it all and had faced up. Once that happened, he actually became the mate that both Dale and Dante needed.

Dante is the Prince of the vampires. He is also the rock of the relationship between the three of them. He was understanding and caring of Dale. He took the time even with all that was going on to spend time with Dale and show him that he deserved to be happy. When push came to shove, he was willing to send Dare away in order to make Dale’s life easier and happy. Dante was also not afraid to kick ass when needed. But he could also being very kind and loving.

The book did mostly revolve around the mating issues of Dale, Dare, and Dante, but a whole hell of a lot about the ongoing issues with the rogues was revealed. There is some serious bad shit coming from the looks of it and I can’t wait to read more from both this series and the Angel Pack series. Also, the secrets that were revealed kind of surprised me.

This book was fast paced and the hits kept on coming. New characters of paranormals are introduced, and damn the history behind that is sure to be interesting. I am really digging the world Maggie Walsh has created and I can’t wait to see what happens next.