Hiya peeps! We have Angel Martinez stopping by today with the tour for her new release A Fine Mess, we have a brilliant interview with Shax, a great excerpt, a fantastic $25 Mischief Corner Books GC giveaway and we also have Shorty’s review, so check out the post and enter the giveaway! ❤️ ~Mel~ 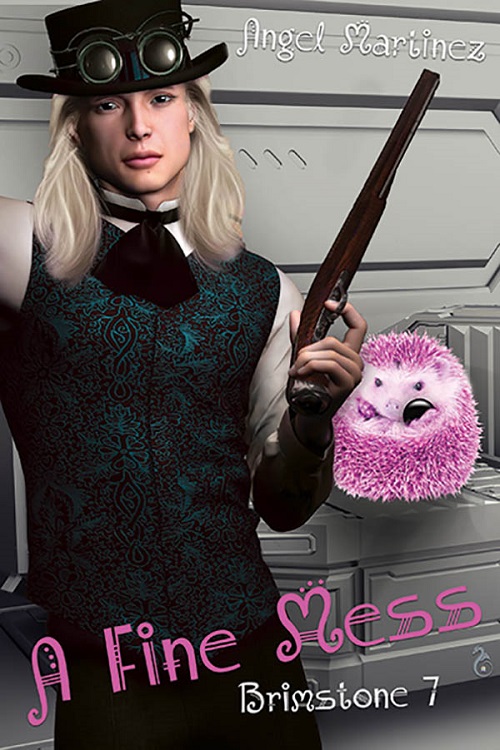 Beware the demon prince who’s sick and tired of running.

Federico Duomo is dead, to begin with. But this is only the first bit of Shax’s problems resolved. Powerful crime lords and an obscenely wealthy oligarch are still determined to destroy him and his crew, and Fluffy’s original owner may be coming after the Brimstone now, too. It would be splendid to be able to take on one thing at a time.

Adding to the external conflicts, life on board the Brimstone has only grown increasingly stranger. Shax has no idea what to do with the seven partly human children that Heckle rescued from slavers. Heckle himself has grown short-tempered, even with Mac. Someone from Julian’s past catches up to them on Barbary. It’s enough to put a demon off his cinnamon buns.

Shax isn’t panicking, though. In fact he’s had it up to his handsome royal nose with the people he loves having to live in constant fear. The fox has turned at bay and the Brimstone’s enemies are in for a shock. The demon prince of thieves is coming for them.

END_OF_DOCUMENT_TOKEN_TO_BE_REPLACED

When a steel trap of celestial and infernal politics threatens to close around them, Shax and Verin flee Earth’s system in a stolen ship, leaving everything behind. It’s an elegantly simple plan, with a new ship and a new life as carefree brigands among the stars.

But the ship seems to hate them, and in order to have any sort of life they need funds. A frightened man offering them a contract to deliver three mysterious crates comes just in time, and Shax is sure their troubles are over. Out of his environment and in over his head, Shax scrambles to understand the players and the consequences of his new life.

With cargo that’s not what it seems, shadowy motives around every turn, and a gorgeous rogue named Julian for a dash of added confusion, Shax’s grand schemes of a new start may be his demise before he can even begin.

Review: Very interesting book. Shax and Vernin, demons, leave their home planet on a stolen ship. They take on cargo to transport to a buyer. In the process they learn what they are carrying and how much danger they are in from several different groups.

Shax, a demon prince, seemed arrogant at times yet sweet and at other times humorous. I liked the way he thought on his feet when the situation called for it. Vernin, a demon, has been friends with Shax for a long time. He seemed fierce and loyal yet always seemed to be telling Shax not to do something.

This story was adventurous, humorous and filled with danger. I found it quite entertaining all the way through. The cargo was a surprise at what it could be used for. I found myself both laughing at some scenes and holding my breath at others awaiting the outcome.

Can’t wait to read what happens next in this series.