I belong to a Demon Lord. His name is Roman. He’s tall, strong, has long dark hair, a deep sexy voice and, let me tell you, absolutely f-ing gorgeous. Yep. I even wear his ring. Third finger, left hand.

Except – its’s not a wedding band. Far from it, actually. It simply means I’m his submissive.

Well – it doesn’t really mean that either, although I wish it did.

No. The ring’s function is only to give me “sight”. Being human, once I had it on, I could suddenly see Roman’s stupid lost legions; very nasty scary things that would as soon kill me as look at me. And because I wear the ring, guess what? It’s now my job to recapture all those creatures for him. Yay me, right?

At least I get to be close to Roman… sometimes.

But, to tell you the truth, I was tricked into putting this damn ring on by Cathy, some random woman I met at a park, who unfortunately likes Roman, too. A whole lot. She brazenly flirts with the demon every chance she gets and right in front of me, too. Crap, it pisses me off. In fact, she brags she was the one who found me, got the ring on me and then offered me up to Roman like I was a T-bone steak or something.

However, there’s something else going on. Something big. Because there’s another gorgeous Demon Lord in our little earth realm and he will stop at nothing to capture Roman’s loose legions for himself. Not only that, seems he’s out to catch me, as well.

Huh. My name is Micah and things just got very interesting.

Hurri is giving away a $20 Amazon gift certificate with this tour. Enter via Rafflecopter for a chance to win: 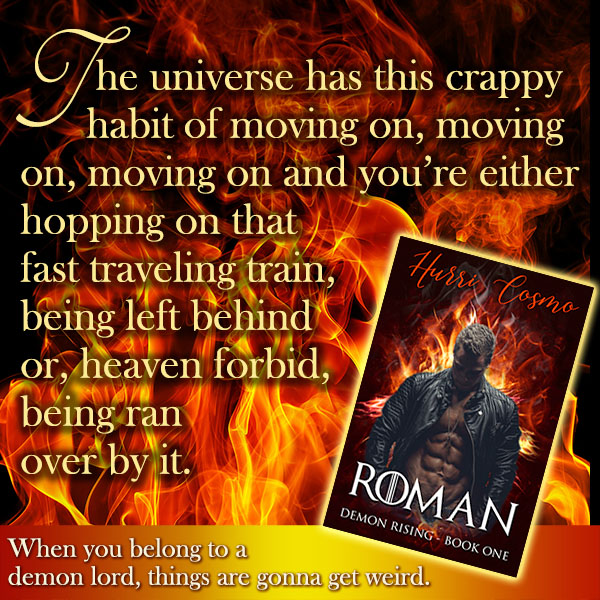 Micah stared at her. What the hell was she thinking he could do? Glancing behind them, having turned down several different corridors, he realized they were completely lost. Even so, the demon/legion/thing from hell was still hot on their trail. Lumbering its thick body up the hall, sliming the walls and floor, the bird lizard bellowed at them, waving its mangy wings, making him cringe. “You want me to fight that? How?”

“I don’t know. You’re the ring wearer. Just… just suck it into the ring.”

As scared as she seemed to have been before, she stood there, hanging onto his arm, refusing to run another inch. Where was this bravery coming from? They needed to get out. He pried her fingers loose. “You fight it. I’m leaving.” Figuring she would follow, Micah turned and ran.

But of course, he had no idea of where he was going. He needed an outside door. Roman had said to get out of the building. Okay. How?

He flew through another set of double doors, amazed there were no codes to enter to open the them, no security or anything. That’s when he thought briefly about the guard at the entrance and the possibility he was being observed on one or more of the monitors. No way he would be able to explain his behavior. He slowed to a stop.

A nurse or doctor stopped beside him. “Can I help you? You look lost.”

She pointed back from where he had come. “You’re going the wrong way. You need to go back that way. Just follow the signs that say exit.”

“You mean there’s no way out of the building this way?”

There was a scuffle and a hiss behind him. Damn. He knew if he turned he would see it. Did that thing get Cathy? “No. That actually sounds perfect. How do I get there?”

The woman’s expression was suspicious, like maybe she thought he was some escapee from the psych floor, but she indicated farther down the hall. “There’s a set of double doors at the end of this hallway. Go through them and you’ll see a sign for ‘Courtyard’. Follow that hallway and you can’t miss it.” She nodded, dismissing him, and went on her way.

Okay, courtyard. Perfect. He hurried toward the double doors and pushed through them…

and there the damn bird-thing was. Right in front of him.

How in the world was it able to get in front of him? But then why wouldn’t it be able to do that? He had no idea how any of this worked. He turned back, intending on reversing his course, maybe try and see what happened to Cathy, he shouldn’t have just abandoned her, but there was another one coming up the hallway right behind him.

An arm came around his neck and he was pulled backwards into a small room and the door shut in front of him. The arm wasn’t tight, he could breath, but he struggled mindlessly anyway. “Let me go!”

The arm left him but then a hand came hard and firm over his mouth and someone whispered fiercely in his ear, “Quiet! And be still. They will hear you.” 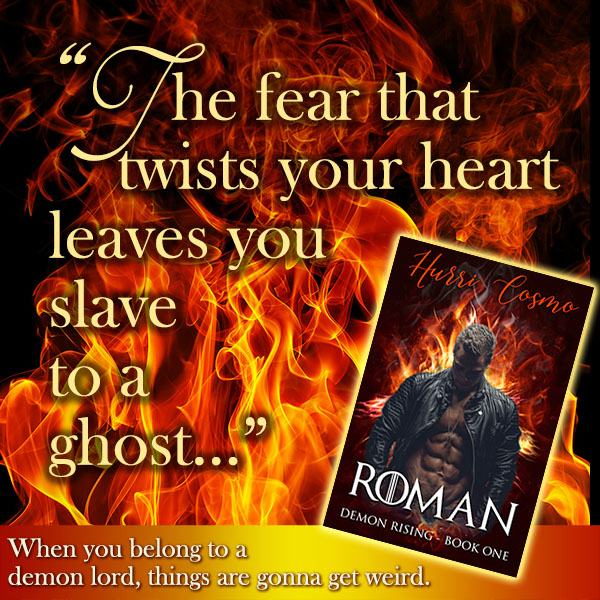 Hi, my name is Hurri Cosmo and I am a happy ending junkie. I always have been. You can be pretty rest assured everything I write will have one. I am not big on angst. I believe we get enough of that in real life so when I go to read something, to make the real world go away for awhile, I will most likely not chose something that will make me cry.

So I write for those people who, at least occasionally, feel the same way. I’m okay with the fact I will probably never write anything “important” but I guess I will have to see where my imagination takes me. I would love it if you would come along. 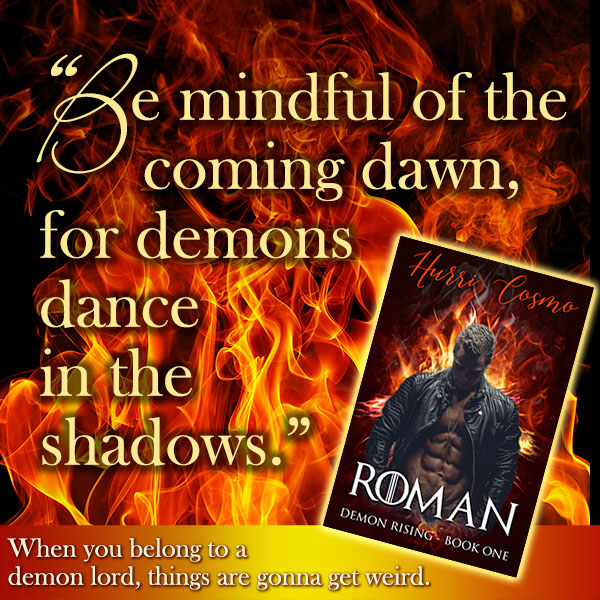