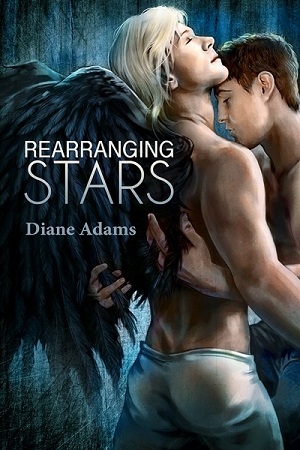 Blurb: The freedom to love comes with a cost.

As a guardian angel, Drake’s destiny is written in the stars. Choice is not part of an angel’s life. Drake never thought twice about it until he’s unexpectedly thrust into watching over Grey, who inspires passion in Drake but endangers his very identity as a guardian angel. Grey is more than just another human—he can see angels. When he discovers that unlike his previous angel Drake will talk to him, Grey becomes determined to pull Drake off the sidelines and into life. Attraction flares between them from the beginning and causes Drake to question his purpose for the first time. His distraction results in a decision that changes everything—and not just for him and Grey.

The characters are well written and fully developed if not strange. In fact it was a bit confusing with all of the twists to it. Drake was an angel and his job was to protect his charge. He just hadn’t realized that Grey was not what he expected. Grey was a shock to the angel’s world.

Like I said the story can be a bit confusing but it does roll together in the end. I truly enjoyed it and look forward to seeing what other stories this author has out. It was a cute little love story that just pulls you in and leaves you satisfied at the end.

Blurb:  Eighteen-year-old Gage Harris is not a part of twenty-five year old Trent Foster’s plans. He likes Gage but the intense attraction between them makes remaining just friends unlikely, and the young farmer with two small children is a complication Trent doesn’t need.

Despite all the reasons to stay away, Trent is pulled into the small family. Gage’s boys are delightful and the young man’s honesty and genuine affection impossible to resist. Trent is intrigued by a life so different from everything he’s known. As he, struggles to reconcile his plans with his feelings Trent begins to suspect that his random offer of a ride in the rain might lead straight to his last first kiss.

Review: Everyone has lessons to learn in life and one’s age is not necessarily the best yardstick to use when measuring the maturity of someone. Gage as presented is an extremely competent and self-possessed young father. As the story develops, the reader will continue to be impressed by Gage’s strength and wisdom even at such a young age. He easily appears to be older than Trent in many of the ways is that the thinks and processes information and his life circumstance. He’s made decisions that many men older than him would not have made, but which he did gladly indicating an amazing strength of character. What Gage is missing is a friend and a partner and he will eventually find that in Trent. If they have, patience and can navigate through some treacherous waters.

Trent will find himself going out of his comfort zone and learning more about ‘real’ life than he imagined.  He’ll suddenly see that his reality is not everyone else’s and he will learn to appreciate his own life and that of others.  Being friends with Gage will help him to mature in ways that he didn’t even know that he needed.

Both men will need to navigate some issues to see if they can make it as a couple and a ‘family’ and there are some very serious issues to navigate that could be the death knell of their relationship. After some setbacks, they’ll find their footing together.  Gage and Trent are wonderful characters who the readers will adore and fall in love with.  Gage’s relationship with his children is precious; and, watching Trent fall in love with the children and want to become a part of the family is heart warming.

This is a story about family, sacrifice and what people will do for those whom they love.  It is wonderfully heart-warming and restorative to the soul.

Series: In the Shadow of the Wolf 03

Blurb: Joe is consumed with grief about his wife and baby and wants nothing more than to lash out. Nick is Joe’s best friend, but he will do anything to help Joe fight the people who want to kill them both.

Joe Christie is consumed with grief, and when new information about his wife and baby comes to light, his first instinct is to kill.

Nick Alexander is first and foremost Joe’s best friend. When Joe met Mara, Nick stood to one side and respected Joe’s decision to settle down, despite being in love with the man who was his lover. Now, in the middle of a case that is murder and betrayal, he has to fight his love for Joe and the people who are trying to kill them both.

Review: This story is part of a series and I recommend they be read in order. Joe is still grieving the loss of his wife and unborn baby when he is told new information about them.  Rage strikes and he needs the help of his friends to get to the truth. Nick is Joe’s best friend and ex-lover and has stood on the side lines for years and is there for Joe no matter what.  But, getting Joe to keep calm is next to impossible when they discover the depths that some humans have gone to.

Splintered Lies is the third book In the Shadow of the Wolf series and is an excellent addition to the series. Joe suffers from grief over the loss of his wife and baby, but he also harbors guilt over his attraction to Nick.  He forces himself to ignore the attraction, as he tries to discover the truth about the new information.  But, as he struggles with his emotions, his need of Nick won’t be denied. Nick stood aside when Joe chose Mara, but he never stopped loving him. After the shocking revelations concerning a senator, Nick knows that Joe needs him more than ever, but will Joe ever accept what Nick has to offer?

I must admit to being torn with some of the storyline. I wasn’t quite sure how to take Joe’s adamant vows of love for Mara, who was he trying to convince, himself or me? It was also the way that he phased his relationship with Mara as ‘He had made a choice’ and ‘The decision had been a good one’ it seemed cynical. Anyway, the rest of the book was spanking good, his guilt over feeling attraction to Nick made sense and his rage when the new information came out was not unexpected. Nick was a darling, pure and simple; he was there for Joe through everything and loved him that much, that he let him go with no recriminations.

The new discoveries that the men made were haunting and there is a bit of danger as a result. there are some passionate sex scenes with one or two tinged with guilt. Joe and Nick are great characters and we also get to see characters from previous books as they are still integral to the continued storyline.  There’s angst, guilt, anger, rage, grief and some happiness. Joe has been through a lot and it leads others to make choices about how shifters should really be treated.  Nick also goes through a lot and it shows just what a strong character he is, that he can let things go when some of us might have been screaming blue murder.

So, I will recommend this to those who love shifters, danger, a complex continued storyline, a range of emotional distress, some hot lovin’ and a new beginning for Nick and Joe.

Series: In the Shadow of the Wolf 01

Blurb:  Jamie is human and he’s a wolf. Werewolves aren’t just some supernatural fairytale. They are a living breathing part of society. Once they hid their true natures, but now they are out and proud. Wolves are an accepted part of society, but even with all the new laws, it’s not easy.

Race relations made society complicated enough, and then came the gay rights movement adding a whole new dimension to the struggle for acceptance. Add a new species to the list and you have a whole different world

Rob is a cop and has just passed his thirtieth birthday, being promoted to a special police task force specializing in wolf / human cases. He sees it all. The seedy underbelly of city life, the fights, the murders, and the parts of human / wolf interaction that people would rather ignore. He meets a young man, Jamie, at a club and embarks on the hottest one night stand of his life. Little does he know that his lover is a shifter. He has no worries with wolves, but interspecies relationships are not on his to-do list.

When a case involving kidnappings of young werewolves lands on Rob’s desk the ugly face of the werewolf sex trade is something he has to deal with. With Jamie seemingly at the centre of it all can Rob push past his prejudices and keep his lover alive?

Pixie’s Reader’s Review:  I really enjoyed this one, it was a refreshing change to read a shifter book that wasn’t all about sex and mates; although there is a lot hot sex and some discussion about mating.

Rob is horrified when he finds out that Jamie is a Wolf.   He has nothing against them personally but he wouldn’t have sex with one…if he had a choice.  Jamie doesn’t usually sleep with humans but there is just something about Rob.   When Rob kicks him to the curb, Jamie realizes what has happened too late.

I thought the way that Rob handled everything was masterful, Jamie was headstrong and willful the supporting characters were incredible, too.   They really added to the story. The story line is fantastic and written really well. Hopefully, this is opening up a new avenue in shifter stories where we have more realistic story lines and a different aspect to the ‘mating’ rules.

If you love shifter stories, hot men and crime stories then this is for you.  Diane Adams & R.J. Scott, I can’t wait for the next one.

Portia’s Writer’s Review:  For those of you thinking about writing a paranormal series, Shattered Secrets would be an excellent case study.  Scott and Adams took a lot of time world building, without distracting the reader away from the main plot.  The characters are wonderfully developed.  I especially like the evolution of Rob.  The attraction between Rob and Jamie is instant, but the love match takes a lot longer to develop.

Since this is obviously part of a series, there are some nice tidbits that will make you want to read the next story.  The problem, if not the actual bad guys, is identified and the book ends on a deliciously suspenseful note.  But, I didn’t have that unsatisfied feeling of incompletion that is too often present in series novellas.  If I never read another book in this series, I felt that Scott/Adams wrote a complete story.

RJ Scott and Diane Adams are both phenomenal writers individually.  Together they have created a series that is smart and sexy.  May the literary gods bless this union for a very long time.