Hi guys! We have Isobel Starling popping in today with her new release The MM Romance Christmas Box Set, so check out the post and enjoy! ❤ ~Pixie~ 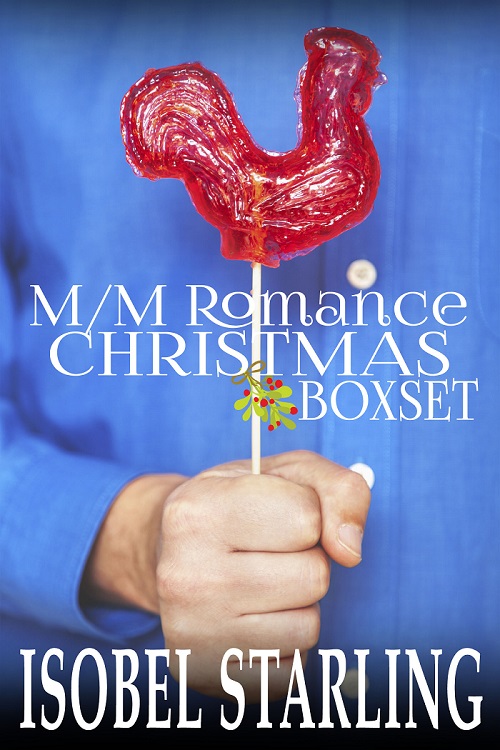 This box set is available as an e-book; you can read it free in Kindle Unlimited or listen to the exceptionally funny audiobook by award-winning narrator Gary Furlong.

The stories in the box set are:

Fred & Ginger
Chris Miller, a patisserie chef for Big Boy Cupcakes has to rush the last minute order of cock cupcakes for the party of a celebrity, but in his haste to deliver, he falls foul of an over-keen chocolate labrador named Fred, and his handsome owner…

The Christmas Bonus
The Investobank Christmas shindig at the Lorien Hotel puts Jake Walters, and the object of his lust in the same place at the same time… and it’s Christmas!

Daddy Christmas (Daddy Kink short story) NEW!
Ryan Sutherland, a side character from ‘Detective Fox and the Christmas Caper’ at last gets the happy ending he deserves.

Back Where He Belongs (M/M Puppy Play Novella)
Kier Campbell returns to Scotland from Australia to spend Christmas with his family. What he finds there is a gift that is worth more than money could buy.

The total word count is approximately 46k, the audiobook is just over 4 hours long. These stories have all the Christmas feels to give you a warm glow inside. Isobel Starling is an award-winning author of gay romance.  Isobel spent most of her twenty-year professional career making art in Ireland.  She relocated to the UK, and faced with the dreaded artist’s creative block, Isobel started to write and found she loved writing more than making art.

The Shatterproof Bond series is an Amazon Gay Romance bestseller and has been translated into French, German and Italian.

Isobel will release the first book in her thrilling new fantasy series The Quiet Work in March 2019. Hi guys! We have Jules Dee popping in today with her new release Fallen for You, we have a great excerpt and a fantastic $10 NineStar GC Giveaway so check out the post and enter the giveaway! ❤ ~Pixie~ 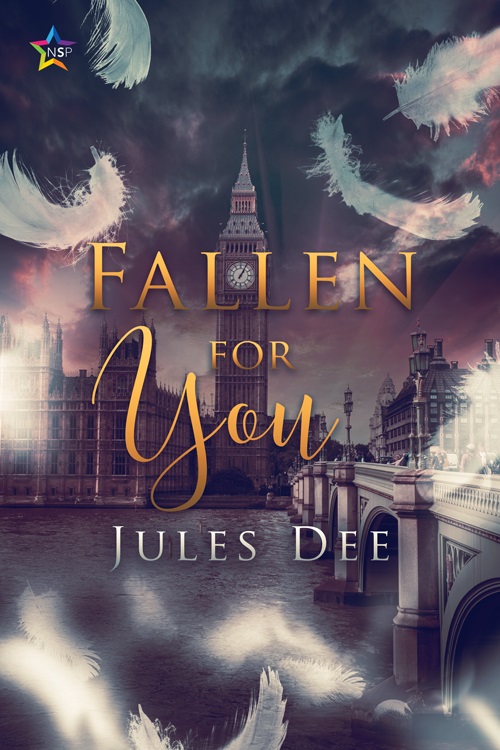 When you work with someone for years, you think you know them pretty well.

Casey Wicker and Martin Bishop are a British Secret Service team with a reputation for ignoring rules but delivering results. They’ve also built a tight friendship, with more than a spark of unspoken attraction.

While on assignment to Scotland Yard, Martin rescues Casey and exposes him to a life-changing secret. Martin is not what he seems, and now that Casey is aware of that, the knowledge most likely comes with a death sentence.

When a way to avoid the tragic ending is suggested, it may very well take more cooperation than anyone is willing to expend.

END_OF_DOCUMENT_TOKEN_TO_BE_REPLACED

Hi guys, we have Brina Brady popping in today with her new release Find Me, we also have a great giveaway so check out the post and click that giveaway link! <3 ~Pixie~ An order from an old drug lord friend disrupts their lives. Brennen worries about Dmitri’s life, his law career, and the safety of Dominika. Antonio Cortez’s request takes them to Germany to fulfill Dmitri’s last obligation to his gangster friend.

Once they arrive in Germany, Dmitri plans to spend time with his husband in the evenings. During the day he and Mischa do Antonio’s bidding. Everything changes when an unexpected event rips their family apart.

Brennen meets many challenges as he tries to deal with his new responsibilities. To make matters more complicated, Dmitri’s ex-wife Nika sues for custody of their daughter.

END_OF_DOCUMENT_TOKEN_TO_BE_REPLACED

Hi guys, we have Jay Northcote stopping by today with the tour for his new release Watching and Waiting, we have a great excerpt and Aerin’s review so check out the post and enjoy! <3 ~Pixie~ Shawn is adrift. Recently graduated, he’s stuck in a dead-end job that barely pays the bills. His girlfriend dumped him, his friends have moved on, and he’s still in Plymouth—going nowhere.

Jude is a student living in the same shared house. Out and proud, he’s everything Shawn’s been running from since he hit puberty. When Shawn discovers Jude works as a cam boy, he can’t resist the urge to watch one of his shows. It makes Shawn want things that scare him, yet his fascination forces him to confront his attraction.

Keen to explore his bicurious side, Shawn suggests they do a show together. Jude agrees, and things get complicated—and kinky—fast. But Jude isn’t looking to get involved with someone so deep in the closet. If Shawn’s going to get what he wants, he needs to find the courage to stop hiding from himself and be honest about who he is.

END_OF_DOCUMENT_TOKEN_TO_BE_REPLACED

Hey guys! We have the brilliant Lissa Kasey popping in with her new release Candy Land. Lissa is also sharing a fantastic excerpt, and a fantastic giveaway! We also have my review for you to check out so enjoy the post and click that giveaway link! <3 ~Pixie~

Cameron “Candy” Michelson Jr. doesn’t have time for distractions. He’s too busy restructuring the red-light district into an adult playland for City M and running the Hidden Gem. But when his companion, Avery “Ivy” Laurent, grows closer to Jack, an investigator for the Institute of Scientific Study, Candy can’t hide his jealousy. Nor his own interest in Jack.

Ivy is crazy about Jack, but he’s also in love with Candy. Ideally, Ivy longs for all three of them to be together, but between Jack’s nonexistent libido and Candy’s supercharged needs, Ivy isn’t sure how to make it work.

When Jack gets called in to help the City M police department investigate a series of violently murdered companions, both Candy and Ivy brace for trouble. But nothing prepares them for Candy becoming the prime suspect.

END_OF_DOCUMENT_TOKEN_TO_BE_REPLACED

Blurb: Cameron “Candy” Michelson Jr. doesn’t have time for distractions. He’s too busy restructuring the red-light district into an adult playland for City M and running the Hidden Gem. But when his companion, Avery “Ivy” Laurent, grows closer to Jack, an investigator for the Institute of Scientific Study, Candy can’t hide his jealousy. Nor his own interest in Jack.

Ivy is crazy about Jack, but he’s also in love with Candy. Ideally, Ivy longs for all three of them to be together, but between Jack’s nonexistent libido and Candy’s supercharged needs, Ivy isn’t sure how to make it work.

When Jack gets called in to help the City M police department investigate a series of violently murdered companions, both Candy and Ivy brace for trouble. But nothing prepares them for Candy becoming the prime suspect.

Review: This book is part of a series and must be read in order.

Candy is being buried with responsibility as he takes over the Hidden Gem, he micro manages and has little time for his friends and when he notices that Ivy is growing closer to Jack he gets jealous, but is he jealous of Jack or Ivy? Ivy has grown to love both Jack and Candy but can’t think of a way to get the two men together, with Jack’s lack of sexual interest and Candy’s near satyriasis needs Ivy doesn’t know if they would ever find a middle ground. Jack cares for both Ivy and Candy and is comfortable with Ivy’s sweetness and gentle caring but Candy’s aggressive needs scare the hell out of him. But when Candy is thrust into the middle of a murder investigation both Ivy and Jack pull together to protect the man they love.

We re-join the guys at Hidden Gem with a dazzling story that is so much more than the blurb hints at. We are able to catch up with the guys from the previous Hidden Gem books, Shane & Aki and Paris & Rain, and they are woven into the story beautifully, they enhance and give the story an extra development that takes Candy’s, Jack’s and Ivy’s story into a whole new realm.

Candy, Ivy and Jack are just perfect characters, we’ve met them in previous Hidden Gem stories and they shine as their own story unfolds. Candy has hidden scars just like Jack and Ivy, and as we delve into the story we get a glimpse at each man’s hidden pain. We see the vulnerability of each man and we root for them to find their way to each other. But as amazing as their relationship is the storyline is astoundingly fantastic!

OMG! I LOVED THIS STORY! We are pulled into this story as Jack is called in to help investigate the brutal murders of companions, suspicion falls on Candy as a Dom and then holy cow there’s a huge massive twist and a whole new storyline opens up, it’s just fantastic! I’m not even gonna hint at what happens next only to say that Paris and Rain’s problems in Cardinal Sin have just got a whole lot more complicated.

Yep that’s it guys, this is a story that I will recommend wholeheartedly to fantasy lovers everywhere, it’s a true work of art and Lissa Kasey has shown that she is a master of understated smack you in the face twists. She wrote this story in such a way that while I was anticipating a troubling time as Candy and his friends proved his innocence that I couldn’t, not in a million years, even imagine what was coming next. Because she was secretly plotting to shock the hell out of us with a twist so amazing that I was gobsmacked and devastated and eager for more.

I recommend Candy Land to those who love mismatched men finding love, paranormal and fantasy stories that still manage to amaze, a storyline that grips you by the throat and refuses to let go and an ending so good that you hope there will still be more to come.

Hi guys, we have Silvia Violet stopping by today with her fantastic new audiobook release Fitting In, we have a great excerpt, a fantastic giveaway and Cat’s review, so enjoy the post and click that giveaway link <3 ~Pixie~

Two cops walk into a bar. Mason, the bartender, waits for the punch line, because no way in hell are these ridiculously hot men real cops. They’re straight out of a cop-fetish fantasy. But he quickly learns that Jack and Gray are the real deal, and they want him in the worst way.

What starts as a night of hot, three-way sex becomes a lot more. The two cops fulfill Mason’s submissive fantasies, but they also meet a more basic need, comfort. They want to take care of Mason, to offer him unconditional friendship, but their concern for him unnerves Mason more than even the kinkiest sex.

To find happiness with his new partners, Mason must change his belief that love is as much a fantasy as a pair of gorgeous, handcuff-wielding cops landing in his bed.