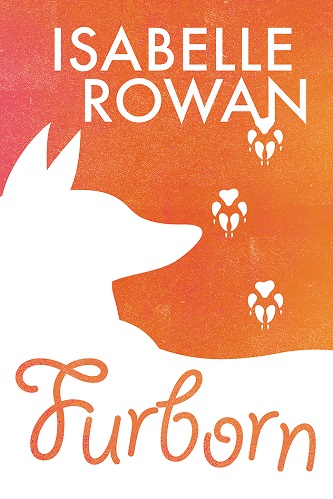 Australian sheep farmers regard them as an enemy to be shot on sight and hung from the branches of an old gum tree.

But not all foxes are just foxes.

Connor Coutts could be the last surviving male Furborn in Victoria, maybe in the whole country, a heavy bur-den for a teenager. His life’s path is clear— protect what’s left of the Furborn line. That is until someone new arrives at the MacKenzie sheep farm. Spencer MacKenzie, with his long black hair and gothic style, is a strange sight in Connor’s forest, but Fate throws the two teenagers together to save their families.

Can Connor trust Spencer to keep his life-or-death secret, or will he hang on the tree?

Review: Furborn is a standalone young adult novel by Isabelle Rowen. This isn’t your usual paranormal, shape shifting human novel. There is something rather laid back about it, which makes it feel so obviously Australian (at least to me) and as a reader we aren’t being led to some massive apocolytic event and true mates. Instead this is a story about two teenage boys living out in the country on a farm. The setting made me think of classic Australian writer Colin Thiele, who I grow up reading books such as Storm Boy (Mr Percival the Pelican on the Coorong!) and Sun on Stubble (thought about this one as it was based around farm life, hence the title).

Foxes have always been the bane of farmer’s in Australia ever since they were introduced on the large island nation by early settlers. But, not all foxes are just foxes. Some foxes also have human skin. With an explanation of shape shifters that compares them to the myth of Selkies from Scotland, the scariest part of this story is the Furborn having to go against the hunters who need to get rid of the foxes that decimate chickens and the like, as well as damaging crops and fences. After all, many farmers believe that the only good fox is a dead fox.

Connor Coutts comes from an ancient line of furborns who turn into foxes. He’s a teenager on the cusp of being a man. There aren’t many left, and his grandmother – the matriarch of all that is left of his family – will do whatever it takes to ensure the family’s survival, now and into the future. Connor’s life turns upside down when Spencer Mackenzie arrives at the Mackenzie Sheep Farm. The Coutts are almost like a local legend and so Spencer’s grandfather finds Spencer and Connor hanging out together rather amusing.

Connor’s friendship with Spencer comes with a lot of changes. The two young men start to explore some more romantic feelings, while Connor knows he has to do all he must to protect his secret and his family. As their lives intertwine Connor begins to realise that perhaps there is another path for him in life. Being a teenager is difficult, but being a teenage furborn is stressful with so much secrecy and expectation.

I honestly didn’t know what to expect but I loved it, I could not put this down. The writing was so emotive without overloading the reader with more angst than necessary. There is so much sweetness and naivety that makes this a beautiful coming of age story. It just so happens that one boy is human and the other boy can turn into a fox.

For anyone that is looking for some YA fiction which doesn’t lead to a heap of post-apocolytic drama but still want your shape shifters, then this is a good book for you. The setting, out in regional Australia on farms, felt so wonderful and was really realistic. I think that was my favourite part of the book.

Blurb: We all find ways to run away. Some do it in seclusion, others in the arms of lovers.

Since the death of his long-time partner, Caleb Maguire lives a quiet life in Australia’s Victorian high country with only his dog and horses for company. Each day is the same. There are no surprises—good or bad—until a major snowstorm hits his mountain and Caleb is called out to rescue a stranded tourist. The late night snow brings with it a lost soul who forces Caleb to reassess his solitary life.

Paul Turner is a barista in the trendy Melbourne suburb of Carlton. He lives life totally in the moment, but a life of no commitments is about to change for this city boy. Three days is all it takes for Paul to fall hard for Caleb, and Paul returns to the city with a promise he’ll be back after turning his life around… but only when all the roads are clear.

Review: This is the first book I’ve read by Isabelle Rowan and I have to say I was completely sold. The plot was uncomplicated but dense in detail and the writing style made it so easy to read, understand and enjoy the characters.

As an Australian, I love reading books that take advantage of all Aussie’s little eccentricities in a book. Even Australian authors are guilty of almost Americanizing our own culture and removing our slang in stories. I know, it’s often to make it simpler to read, but sometimes in the back of my head it’s almost like I start thinking “that’s not a knife” (Crocodile Dundee reference).

Enough about that, though. There’s football (AFL), bushfire, snow, horses, farming… it’s about as Aussie as you can get.

The story is about Caleb and Paul, who Caleb affectionately dubs “Snowman”. The setting is the quintessential Australian bush – somewhere in Victoria, not far from Melbourne. We follow the characters from their first meeting in winter, near a ski resort in a terrible storm (I know, snow isn’t the first thing you think about for Australia since half the country hardly ever gets the stuff).

The unlikely friendship that emerges between Paul and Caleb is totally adorable and is always constantly teetering on the brink of being a romantic relationship.

It isn’t all roses, though. Caleb has his past demons which is the driving force of this book. I absolutely loved this about the plot, though I think I have some concerns for Caleb’s psychological and mental state. Paul is a complete sweetheart and I wanted to hug him while he went through the pain as he put in all the work to maintain some sort of communication with Caleb.

Rather than seeing so many different obstacles we have a man emotionally crippled with grief and two men who seem to be brought together by injury and freak weather conditions.

I adored this book. The Aussie in me loved reading of something so close to home. However, much more than that, the characters may have had their fair share of flaws, but they were super relatable and… I just needed to know how their story ended!

Series: Under the Southern Cross

Blurb: An ex-soldier and an urban Goth walk into a desert. It sounds like the start of a joke, but for Sam Collins and Daniel Evans, it is the beginning of their story. Daniel walks to shed his drug-filled past and make himself whole. But Sam, who hides the demons of war behind a smile, needs Daniel more than either man knows. An old stockman’s wisdom sends them on their journey together, a long hard road to find Australia’s sacred Red Heart and—perhaps—each other.

Part of the Under the Southern Cross anthology.

Review: Daniel’s dreams are constantly pushing him forward toward the desert, or should I say dream.  It is, after all, the same over and over again. It makes no sense to him, but the feeling that he needs to reach the Red Heart. While driving toward his goal, he meets Sam, a drover, and feels a certain connection with the man. That in itself is odd since there has been quite a long time that Daniel has felt anything, for anyone beside his family. The mysterious ex-soldier appeals to Daniel in ways that frighten him. How can such a man like an ex-junky, Daniel doesn’t know, but Sam keeps sticking nearby and lending him warmth and courage.

Almost like in a dream Daniel and Sam decide to walk toward Daniel’s destination through the desert and the two men discover their similarities hidden beneath the layers of their appearances and the hole in their heart starts to fill with feelings they both had forgotten. And while Daniel seams the person to need help the most, he finds out how the smiling, warm; almost boy-next-door Sam has demons of his own and is in desperate need of something.  Something Daniel is more than willing to give.

I loved this title. It started with a near creepy feeling, lots of event seemed like a coincidence that in deeper thought well all related and that gave somehow the notion of Fate putting things together.

The characters were very interesting and quite developed for such a short length story. Each of them unique, each of the adorable and lovable. Daniel with his strength fighting his addictions and trying to make it one more day at a time, and Sam with his unyielding character, something almost “never give up- never surrender”. They were indeed perfect halves of a story, and while there is a low heat level for this one their chemistry and attraction were quite palpable. The magic was there and I loved it.

The author’s way of describing their walk in the desert deserves praising, too, I loved reading it and hell, I so want to visit Australia even more now. Uluru would be such a great destination. Admittedly, I loved her voice and would very much like to read more of her.

I’d love to recommend this book to those who love contemporary romances placed in wonderful parts of Earth and suffering characters trying to make reason out of chaos. A very worth reading novella in my opinion.