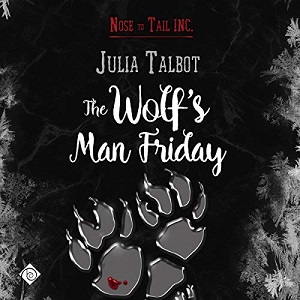 Blurb: The last thing Sebastian Zeller wants is to be pack Alpha. But when the pack leader, his uncle Ron, is attacked, he has no choice but to leave his beloved Colorado mountains and fulfill his duty as Ron’s heir – at least until his uncle recovers. In the meantime, he intends to lure the attacker out…and make them pay.

When Ron gets wind of Sebastian’s plan to catch the attacker, he doesn’t like the idea of risking his heir. That’s where Jaxon Reedis comes in – he’ll balance protecting the dark and sexy werewolf with pretending to be his personal assistant. He’s walking a fine line that requires all his foxy wit and craftiness…and that’s on top of the inescapable feeling that he and Sebastian are meant for each other. When the attacker returns, will they be able to maintain their deepening bond when danger threatens to tear down everything they’re building?

Review: The Wolf’s Man Friday is book 2 in Julia Talbot’s Nose to Tail Inc. series. If you’re like me and haven’t read book 1, it is fine to dive right into book 2 without any problems whatsoever. Although, honestly, after listening to this book and reading the blurb of book 1 I really do want to get my hands on it as soon as I can. The book is super fun, with a good dash of action.

The MCs of this books is Sebastian Zellar and Jaxon Reedis. Sebastian is an artist at heart and run’s his uncle’s textile company. However, his uncle Ron, who basically raised Sebastian from a young age, was attacked and two of his men were killed. Of course, Sebastian can’t let this go and he wants to find out who’s responsible. Knowing this about his nephew, Ron hires protection for Sebastian, not wanting his beloved nephew to get himself killed.

That’s where Jaxon comes in. Jaxon works for Nose and Tails Inc., a staffing agency. Jaxon’s boss knows that he is the best man to keep an Seb for Ron. Jaxon also explains that he was trained as a butler and so working as a PA is an easy role to ease into. Jaxon has to work hard to keep an eye on Seb. And when circumstances bring them closer, tension is added when the guys give into their sexual desires but don’t accept their mating bond straight away.

Both MCs are charismatic and totally charming – even if Sebastian is a grumpy wolf! I particularly liked Jaxon, he’s a bouncy, agile fox who has been hired by Sebastian’s father to be Sebastian’s bodyguard while masquerading as his PA. I also enjoyed the secondary characters as well, particularly Sebastian’s friends, Allan, his partner in crime, and Tyrone, an elk shifter who has known Seb and Allan for years and is now Seb’s driver. The overall plot was good except that I felt it a little slow in some places, but nothing that didn’t bother me too much. This is a great adventure – many fans of shape shifter books will find this one a satisfying read.