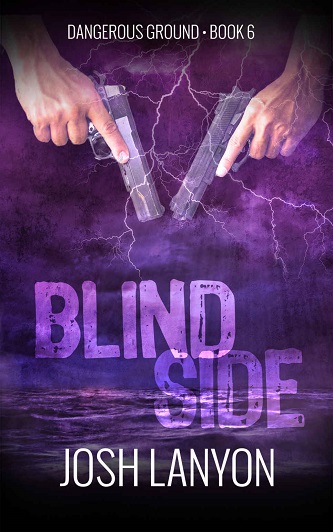 Blurb: The boys are back in town–for one last adventure!

It’s a good problem to have: more business than they can comfortably handle on their own.

But with resources already overstretched, the last thing former DSS agents and newbie security consultants Will Brandt and Taylor MacAllister need is another client—and the last thing Will needs is for that client to turn out to be an old boyfriend of Taylor’s.

Sure, Will has always known Taylor had a wild past, but he was kind of hoping he’d never have to sit down and have a beer with it. But golden boy Ashe Dekker believes someone is trying to kill him, and Taylor is determined to help, no matter the cost.

It’s a bit of a jolt to have Taylor for once totally disregard his feelings, but Will is equally determined that “the cost” won’t be their relationship—or Taylor’s life.

Review: This is the last book in long running series and the boys certainly go with a bang!

I regretted not rereading previous books, because book throws reader in at the deep end from the beginning. Our heroes are at odds. Outwardly, they should be happy. Their business is finally getting of the ground they are in same place and together. Except a ghost from Taylor’s past seems liable to spoil everything. His old ex asks for his help, and he is resolved to give it, no matter his partner’s justifiable reservations. Their client is lying to them, they are short on manpower, the contract they signed needs to be fulfilled. They are both resenting the other one and the situation they are in, which doesn’t bode well for them: It’s possible that someone is gunning for them.

For most of the book the men are dealing with relationship woes. It was spurred into action by reappearance of Taylor’s ex, but exposes secrets and insecurities they both have, so the ground they are on is seriously rocky. They are trying to plod through trouble and it doesn’t look promising!

Then the villain gets revealed ( and up to this point I was ignoring suspense subplot, so I was shocked at twisty turn My congratulations to the author, definitely wasn’t expecting that). It’s another shake up for Will and Taylor.

It leaves them in bad place, which allows for everything between them which simmered during the book to get out in the open and for them to have happy ending.

It’s a fitting end to interesting series. Loved the book!

Drew Lawson is racing against the clock. He’s got a twenty-four-hour window to authenticate the mummy of Princess Merneith. If he’s not at his boyfriend’s garden party when that window closes, it’ll be the final nail in their relationship coffin.
The last thing he needs traipsing on the final shred of his patience is brash, handsome reality show host Fraser Fortune, who’s scheduled to film a documentary about the mummy’s Halloween curse.

The opportunity to film a bona-fide professor examining the mummy is exactly the aura of authenticity Fraser needs. Except the grumpy PhD is a pompous ass on leave from his ivory tower. Yet something about Drew has Fraser using a word he doesn’t normally have to draw upon: please.

With no time to waste-and a spark of attraction he can’t deny – Drew reluctantly agrees to let Fraser follow his every move as he unwraps the mummy’s secrets. Soon they’re both making moves behind the scenes that even the dead can’t ignore…

Warning: Whoso shall ever open this tomb, er, book shall suffer the curse of the Pharaohs. Okay, maybe not. But set aside a chunk of time for marauding mummies, too many cosmopolitans, illicit sex in hotel rooms, and other non-academic shenanigans.

Review: Drew Lawson is a professor hoping to make tenure by publishing a paper on his authentication of the mummy Princess Merneith’s tomb. He’s travelled all the way Wyoming and pissed his long-term boyfriend off in the process to examine this mummy’s tomb. Unfortunately the doctor in charge of the museum has double booked the princess and left town over the Halloween weekend. Drew is forced to work with an extravagant reality show host, Fraser Fortune, who takes charge of the museum to film an upcoming episode.

The authentication of the mummy is just the tip of the iceberg for Drew and Fraser who wind up spending their down time in the quiet Wyoming town together chasing mummies, bar hopping and trying to figure out exactly who is in charge of the museum.

There was a sort of Boris Karloff feel to this story. If you are a fun of the movie, then you’ll figure little things about this short story out pretty early on. But it was a lot of hysterical, creepy fun hearing Drew and Fraser skirting around town in beat up converse, chasing the peeping tom mummy, getting wasted in a hick bar, then making out to the wee hours of the morning.

I do have to disagree with the part of the description that states ‘illicit sex in hotel rooms’… the sex in the story was simply hinted at, no descriptives and if you blink, you’ll miss it.

Narrated by Sean Crisden, need I say more? Sean C is one of the best narrators out there right now. I loved the voice he gave Fraser Fortune. At first you might think Fraser is an aging, pompous ass by the tone Sean C uses for him, but he’s not. He’s really an attractive guy that hosts a reality show and wears converse. I could almost picture the look on Fraser’s face a couple times when he was placating a slightly tippy Drew.

Overall I quite liked this story, well worth a listen if you are a fan of fun mysteries.