Evie and the Pack-Horse Librarians

As an assistant editor at the prestigious Hanhat Publishers, Evie Southiel is entrusted with fine-tuning the manuscripts of the company’s most important authors. Her skills as a book witch allow her to manipulate the stories she reviews and bring them to life.

When her girlfriend steals the secret manuscript of Hanhat’s best-selling author and leaks it to the press, Evie is exiled to become a journey carrier with the Pack-Horse Librarians in the eastern mountains.

Timid city mouse Evie doesn’t know the first thing about surviving in the wilderness, riding a horse, or dealing with the rugged mountain folk and coal miners surrounding the town of Hevis. She does know books, though, and she’s determined to do the best job she can. But that goal is jeopardized when her horse gets spooked on her first solo run, sending her tumbling out of the saddle and into a mysterious woman’s life.

Evie and the Pack-Horse Librarians, Laurel Beckley © 2020, All Rights Reserved

A hard knot had formed in Evie’s throat since she was summoned into Mr. Lodge’s corner office, and now the butterflies in her stomach transformed into a hive of angry bees threatening to upset her meager breakfast.

Mr. Lodge gave another long humph, the fifth in as many minutes.

Evie shuffled in her seat, trying to keep her fingers knotted together in her lap, struggling to prevent her feet from tapping with anxiety.

After an eternity, Mr. Lodge looked up from the newspaper, placing it carefully onto his desk. He closed his eyes. When he opened them, his usually cheerful expression was gone, replaced with a stern man Evie didn’t recognize.

“Miss Southeil,” he began, then stopped. Another sigh. He closed his eyes and pinched the bridge of his long nose. Evie unconsciously mimicked the gesture, pushing her own wire-rimmed glasses further onto her face. She caught a glimpse of her ink-stained fingers from the corner of her eye and hastily dropped her hands into her lap, letting her dull-gray skirt envelop them.

Mr. Lodge opened his eyes. “Miss Southeil,” he repeated. “Of all the journeys present, I might have expected this egregious misstep from anyone else. But not from you.”

Evie bit her lip, trying to prevent the knot in her stomach from bringing up actual food onto Mr. Lodge’s manuscript-filled desk—manuscripts she had nurtured into books to be published and read and devoured by the hungry readers of historical fiction. Even among the handful of journey-rank editors at Hanhat Publishing, Evie was special. She knew she had the gift of turning rough sentences into delightful bouquets for the eyes, and yet here she was. Quivering in her boss’s office. Oh, how she had messed up.

Mr. Lodge removed one manuscript from the pile and placed it directly underneath the damning newspaper. Evie stared at it, trying to will away the blasted thing’s existence.

He tapped the stack of papers with an inky finger. “How did you let this come to pass? Our competitors are breathing down our backs, eager for any hint of weakness, and you give them the scoop of the year!”

“I-I’m sorry, Mr. Lodge,” Evie whispered, ducking her chin to prevent tears from escaping. It wasn’t her fault. Well, it was, but it wasn’t. “I won’t—”

“You’re damn right you won’t!” Mr. Lodge slammed his hand onto the table.

Evie squeaked, jumping in her seat.

He reeled in his anger, grimacing at the appendage as though alarmed that such an outburst had come from his body. He heaved another sigh. “Forgive me, but you know as well as I that Mr. Cabot’s novel was to be the highlight of our publishing year. Having the plot…splattered across the gossip rags is an embarrassment to the company and the Guild.”

Evie wanted to curl up inside herself until she became nothing more than a ball of gray cloth, hidden from the world.

Mr. Lodge’s face softened as did his voice. “Evie, I’m not going to fire you.”

She lifted her head, hopeful.

“You’re the best assistant editor I’ve had in years, but I think this promotion came too fast, too soon.” He shook his head sadly. “But it’s no use having you here waiting for this whole scandal to blow over. It’ll harm the company’s reputation, and to have your face associated with this whole thing…” He paused, staring at her until she lifted her head. She tried to meet his gaze and failed. Eye contact had always been a struggle for her. “I’m sending you away,” he declared.

With her head bowed, Evie nodded. “I’ll clear my desk and head to the printers’ office.” The printers’ office was located five blocks away in the factory district. Dark, dingy, labor-intensive, and where Hanhat Publishing usually sent their screw-ups for menial labor.

“No, Evie.” She looked up, startled. “It’s going to be farther than that. I’ve reassigned you to the Librarian’s Guild.”

Evie’s heart lifted. At least she’d be near books. Near words and stories and life. Not confined to operating the massive printing machines, spending every minute in danger of getting an industrial injury. She blinked, realizing that she was still being sent away. Being transferred from one guild to another was hardly unique, but certainly not a common practice.

He went on. “Think of this as an opportunity, a chance to use your journey time to, well, journey.”

Journey? Evie wondered. Members of the Librarian’s Guild were stationed in every city, town, university, and village in Isten with a large enough population to support them, but they certainly did not travel.

“You’ll be part of the pack-horse librarians stationed in District Forty-five,” Mr. Lodge said. Obviously interpreting Evie’s miscomprehension as shock, he added, “This will be a two-year assignment. After that, you may return to Hanhat Publishing. I’ll always need copyeditors.”

“Th-thank you, Mr. Lodge,” Evie stuttered, lips moving automatically, mind still trying to figure out what had happened. Pack-horse librarians? Two years? And a copyeditor? She pressed her fingers to her lips, struggling to choke down bile and disappointment.

Her supervisor slid a folder across the table. It was depressingly thin. Mr. Lodge smiled, a mixture of kind and condescending that hurt worse than any of his words. “Someone will come by your flat to collect any remaining manuscripts. You’re dismissed.”

Evie rose from her chair to stand on legs she wasn’t certain would work and took the folder with shaking hands. She pressed the packet of papers to her stomach and bolted, bumping into her fellow journey, Anda, on her sprint to the bathroom. Once inside, she emptied the contents of her breakfast, along with the entirety of her previous life, into the toilet.

“Evie?” The voice was hesitant.

“One minute.” Evie wiped her mouth and ran cold water over her wrists and face, trying to fight the nausea. She avoided the mirror above the sink. Her eyes were surely red and puffy, her dark skin sallow and splotchy. She didn’t need a mirror for that information.

She opened the door, nearly jumping as her girlfriend Anda burst inside and locked the door behind her. “Evie, I just heard, and I’m so sorry!” She tried to wrap her arms around Evie in a hug.

Evie pushed her away, staring into the face of the girl she had loved so fiercely until that moment in Mr. Lodge’s office. “How could you?” she demanded.

Anda’s eyes widened innocently. “Whatever do you mean?” she asked, placing a hand on her chest.

Rage bubbled in Evie’s chest, replacing the nausea and sickness. “I let you review that manuscript in confidence, Anda,” she hissed, “to help you polish your editing skills.”

If possible, Anda’s eyes opened wider. “Evie,” she cooed, “I gave that manuscript back to you a week ago. You must have misplaced it. You know how forgetful you are.”

Evie shook her head. Tears continued streaking down her cheeks, and she wiped them off vigorously with her sleeve, her fist clenched tightly.

The story had broken the night before, and since Evie had first found out about it as she entered the building for work that morning, she’d had the sinking suspicion that Anda was behind her situation. Evie was allowed to take manuscripts home and help smooth them over, but only with the explicit understanding that no one else could review an author’s latest creation.

“I returned that manuscript to Mr. Lodge a week ago. Besides me, no one but you had hands on it.”

Anda lips twisted in a facsimile of a smile. There was something predatory in her gaze, which Evie had seen her deliver to their fellow apprentices and journeys but never to her.

“Evie, dear, you know it wasn’t me. Just accept responsibility and take your punishment at the pressman’s office.” She bit her lip and looked down, fluttering her eyelashes. The predatory gleam disappeared, replaced by the image of a remorseful girl. “I think that, with all this in mind, we shouldn’t be together anymore.” Her eyelashes fluttered again. “I mean, an assistant editor with a disgraced pressman? That would taint my career.”

Evie gasped, tears beginning to spill out again. Anda’s betrayal was worse than anything she had ever anticipated, but to end their four-year relationship so… callously… was something else.

“I can’t believe you,” she whispered. “I knew you were ambitious, but—”

The remorse vanished, and Anda was replaced by a hardened creature Evie had never seen before.

“But what? I’ve been here eight years, Evie. Do you know how hard I’ve worked only to be passed up by a girl who just got promoted to journey? This position is my due. Not yours.” She sniffed. “And clearly you don’t have the maturity to handle such a job.”

Evie placed a hand over her mouth, trying to stuff her sobs back down her throat as Anda threw open the door and stormed out.

Tears overwhelmed Evie’s senses as she slid down the wall and hit the tiled floor. This was so, so much worse than she had ever imagined. She’d lost her job, been betrayed by her girlfriend, and was being sent away in disgrace.

How would she tell her parents? 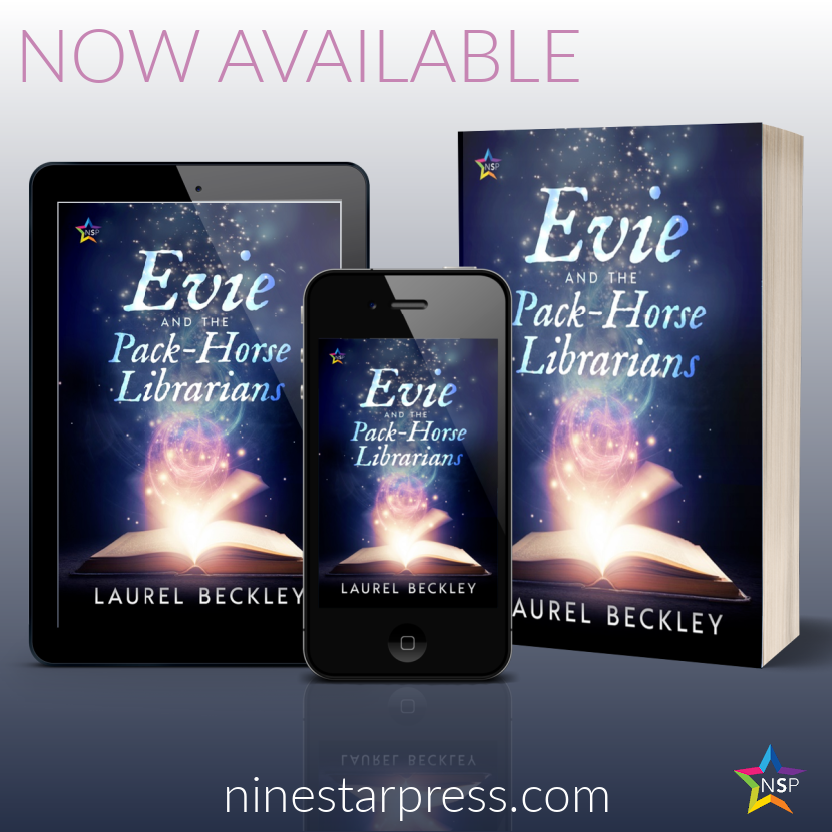 Laurel Beckley has been writing ever since she started her first novel the summer before eighth grade—a hand-written epic fantasy catastrophe that has lurked in her mind and an increasingly ratty college-ruled notebook ever since.

She is a writer, Marine Corps veteran, and librarian.