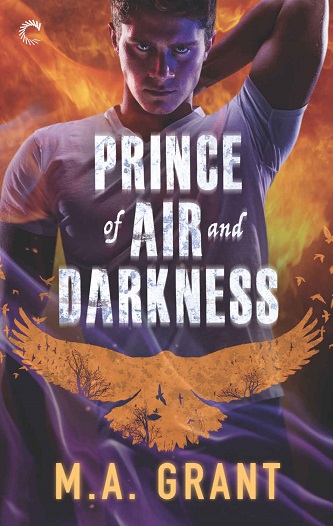 Title: Prince of Air and Darkness

Blurb: Phineas Smith has been cursed with a power no one could control.

Roark Lyne is his worst enemy and his only hope.

The only human student at Mather’s School of Magick, Phineas Smith has a target on his back. Born with the rare ability to tap into unlimited magick, he finds both Faerie Courts want his allegiance—and will do anything to get it.

They don’t realize he can’t levitate a feather, much less defend the Faerie Realm as it slips into civil war.

Unseelie Prince Roark Lyne, Phineas’s roommate—and self-proclaimed arch nemesis—is beautiful and brave and a pain in the ass. Phineas can’t begin to sort through their six years of sexual tension masquerading as mutual dislike. But Roark is also the only one able to help Finn tame his magick.

Trusting Roark’s mysterious motives may be foolish; not accepting his temporary protection would be deadly.

Caught in the middle of the impending war, Phineas and Roark forge a dangerous alliance. And as the walls between them crumble, Phineas realizes that Roark isn’t the monster he’d imagined. But their growing intimacy threatens to expose a secret that could either turn the tide of the war…or destroy them both.

Review: Phineas has the ability to tap into the ley lines. While a unique and strong power it is also dangerous as he can not control it. Roark is the prince of air and darkness at unseelie court. His mother, the queen thinks that she could take Finn’s power, so kidnaps and tortures him until Roark rescues him. This is the beginning of the book.

From there Roark has to constantly save Finn from various creatures trying to take the power from him while at the same trying to keep his feelings about Finn under wraps. Everything comes to a head when war looms on the horizon between the fae realms.

Adventurous and action packed this story captures your attention from start to finish. I loved everything about the story. Roark suffers along with Finn until they can longer fight their feelings. The twists and turns in the book had me gasping when the secrets were revealed.

I am looking forward to the next book in the series to see what happens next.