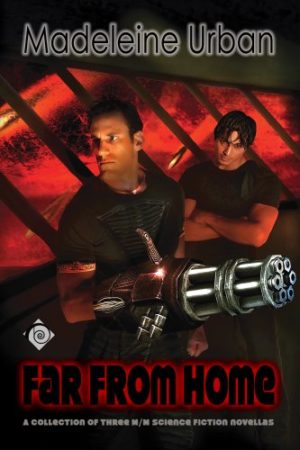 In Earth’s not-too-far future, a talented scientist stumbles over a plot to use the genetically enhanced military to declare martial law and take over the government. Dr. Ryne Siler enlists his friend, Dr. Cary Matthews, a brilliant engineer, to figure out how to stop it. When the investigation goes awry, they’re on the run, and the only thing between them and capture is a hidden cache of sleeping soldiers with enhancements of their own. Ryne and Cary are desperate, but will waking these soldiers help – or just make things worse?

Space privateer Tris is just doing his job – delivering canisters to a military science vessel – when he discovers that he is transporting people infected with an engineered virus designed to exterminate the human race. In the midst of an alien attack, can the rogue pilot save patient Retter – the key to the cure? Or will he lose both humanity’s salvation and his heart?

The nearly fatal crash of their spacecraft leaves Jack and Samuel stranded on a verdant planet far from civilization. Discovered and sheltered by a native tribe, the two resign themselves to new lives – lives that include a new culture, a new language, and even new love. But their new home isn’t at all what it seems, and when war and illness strike, they find out just how far from home they are.

Review: Three short stories that would have been much better if there was more to them.

Enhanced is about Rhyne and Cary waking up two engineered level one soldiers to take out level three killing machines. Interesting but too short with too much romance.

Close Encounter is about a space privateer, Tris, who is transporting goods and realizes he is also transporting a young man infected with a virus that could either destroy humanity or cure it. I enjoyed this entertaining story that was sealed with a kiss.

Following the Sun is a strange story about a tribe who worships the sun. Two men, crash land and get saved by the tribe. Alas I can not really expand on that or else I’ll give away the entire story.

All three stories were entertaining but way too short. Needed more information in all three.