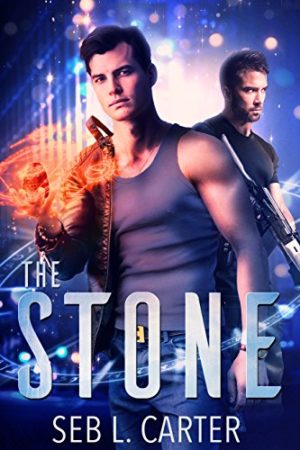 Blurb: A stone holds an ancient secret—and the key to present-day terror.

A murder-suicide was only the beginning.

Seven years ago, Liam’s father picked up a gun, killed his family then himself. Liam was left behind to carry the burden and the guilt.

Now Liam only wants to finish college and live a normal life. But when he is handed a stone, a stone that appears plain, he is catapulted into an unknown world of mystery and magic…

A CIA agent finds himself a part of something with more secrets than the government he works for.

Patrick possesses a psychic ability to find people. Coerced to find Liam, their first meeting reawakens an ancient connection. Together, they find themselves in the midst of a culling, the destruction of a secret society formed millennia ago.

Destiny unites a group of strangers to face an antediluvian evil that has the world as its prize.

The Stone is a 142,000-word paranormal, urban fantasy adventure that involves a secret agent, a law man, and a gay guy who becomes a hero.

This novel features an LGBT relationship with a low-heat romantic subplot.

Review: I was unsure about this book but took a chance on it anyway and boy am I glad I did. So much happens in this story that left my head spinning but I understood why. It’s a setup for the rest of the series. The different characters introduced throughout had to have ample amount of time for the reader to get a grasp on what is going on and the role each character will play as the story continues.

I loved Liam’s character. He had been through so much and yet has even more to go through. All the secondary characters took my breath away with the roles they played and how things came about. I don’t want to give too much away but this was truly a fascinating story.

Twists and turns that leave your head spinning and you thinking what else is going to happen.

Though I understood why Patrick did what he did at the beginning I also knew Liam would be pissed when the truth came. Who wouldn’t be. I thought Patrick’s ability was interesting.

I loved how all the characters are somewhat connected to events and people that took place many, many years before. It’s almost as if it was destiny that all these people met in this lifetime. A truly wonderfully written story with plenty of details, action and some romance.

I am looking forward to reading the next installment to see what else happens.