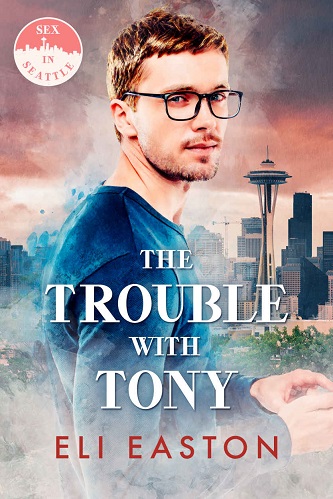 Title: The Trouble with Tony

Blurb: As part of the investigation into the murder of a young woman, Seattle P.I. Tony DeMarco poses as a patient of Dr. Jack Halloran, the therapist who treated the victim at a Seattle sex clinic. This isn’t the first time Tony has gone undercover, but it’s the first time he’s wanted to go under cover with one of his suspects. He can’t help it—Jack Halloran is just the kind of steely-eyed hero Tony goes for. But he’ll have to prove Halloran’s innocence and keep the doctor from finding out about his ruse before he can play Romeo.

Dr. Halloran has his own issues, including a damaged right arm sustained in the line of duty as a combat surgeon in Iraq and the PTSD that followed. He’s confused to find himself attracted to a new patient, the big, funny Italian with the puppy-dog eyes, and Tony’s humor slips right past Jack’s defenses, making him feel things he thought long buried. But can the doctor and the P.I. find a path to romance despite the secrets between them?

Review: Private Investigator Tony has been asked to look into the death of a young woman, a young woman who apparently committed suicide; it leads Tony to go undercover as a patient at a Seattle sex clinic and getting him help for his own little problem. Tony doesn’t believe that the doctor who treated the young woman, Jack Halloran, was involved but he wants to make sure he doesn’t miss anything and that it isn’t his attraction to the doctor clouding his judgment. Jack has his own issues, injured in the line of duty as a combat surgeon; he has lost all confidence in his own appeal and becomes confused by his attraction to his new patient, Tony.

This is a great story that has some brilliant humorous moments including an Italian mother who has no boundaries. Tony is a great character who puts his all into solving his clients cases, his newest case is a puzzle though, and no matter the alibi, he still suspects the husband. Going undercover Tony wants to discover just what treatment the dead woman received, but he gets a surprise of his own when his own little problem rears its ugly head. Jack is a man who has had his confidence knocked, forced to change his speciality he is now a sex counsellor and is intrigued by his new patients problem, but he also find himself attracted to the man.

This is a great novella that has some incredible sexual tension and a pretty good investigation. Tony is a character that you fall in love with, he is so cute with his blushes and embarrassment and his intense attraction to Jack. Jack is a man who has had some hard knocks, but he is so nice that you want him to break the rules for Tony. Tony’s investigation is great but the budding relationship with Jack is better, both of them entwine and I loved Jack’s reaction to the truth about Tony.

I recommend this to those that love humorous private investigators, hot doctors, great sex, an interesting storyline and a very amusing ending.