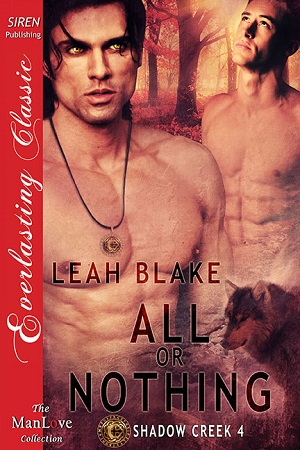 Title: All or Nothing

Blurb: Mikhail Borreagous loathes anything paranormal. After witnessing the vicious murders of his older brothers in an attack that left him clinging to life over twenty years ago, he vowed to hunt and kill anything not human. That is, until Nico Montague crosses his path.

Nico is a wolf shifter and no stranger to Mikhail’s killing ways. The infamous hunter is his mate, but Nico will do whatever it takes to protect him against the lamabra. When a second attack from the vampire half-breeds goes south, Nico makes a crucial decision in hopes of saving Mikhail: return to Shadow Creek…with his mate.

Mikhail wakes up in the heart of the paranormal sanctuary his boss has dreamed of breaching. Caught between his fierce attraction to Nico and his loyalty to his leader, Mikhail has to make a life-altering decision: betray the creatures that have protected him despite his reputation, or risk his life to stay with Nico?

Review: Although I love this series I did not care for the repetitive phrases of beast and beastly throughout this story. It got on my nerves to constantly read that. I know how Mikhail, a hunter, feels about the paranormal so there was no need to say so continuously. Once was enough.

Nico, was strong and understanding yet firm and unmovable on certain things. I liked the way he let Connor see for himself how creek was rather than constantly telling him. Mikhail’s past trauma broke my heart. I did understand to a point his hatred of the paranormals.

Jude, the leader of the hunters, was evil incarnate. It shocked me at what he did to those who he selected. It served to remind me just how animalistic humans can be. Looking forward to the next book in the series. Blurb: Raul Carney, world-renowned alpha wolf and leader of Shadow Creek, suffered a mortal wound when human hunters attacked the sanctuary. Hit by a silver bullet laced with fae poisoning, he is in a desperate fight for his life as the threat of destruction hovers over the Creek. One person holds the key to his cure: Victor Cavanough, his forbidden mate.

Victor, elusive son of the vampire king, is intimate with heartache. He watches Raul from the shadows, shattering inside all because of a blood pact between his father and Raul two decades earlier. When Raul’s condition deteriorates, Victor casts aside the consequences of the pact in hopes of saving his mate.

Unfortunately, more than a pact stands between Victor and his hope to save Raul from death. Twenty years of deceit is about to unfold. Raul’s time runs short. Will Victor sacrifice everything to save his mate in one last hurtle to finally find eternal happiness?

Review: This story absolutely crushed me at the lengths someone would go to make sure what they wanted or did not want happen came to pass. Raul and Victor are mates but due to a blood pact Raul signed twenty years before he can no claim Victor or risk killing him.

So much happens as secrets slowly are revealed. Victor is an anomaly with great powers for a vampire. I liked that he was different and powerful considering he is the mate of an alpha. My heart broke for Raul for all the suffering he endured to keep his mate safe from harm.

It did not shock me when the truth was revealed as I suspected what was going on in book two. I was disgusted with Victor’s father the vampire king. His continued disregard for anything he felt beneath him was tragic. Blurb: Ashly Marrouch is given an important task: deliver a box with a secret, lifesaving antidote to the alpha of Shadow Creek. For Ashly, this is another night’s work for the vampire king he serves. What should have been a simple drop-and-go is anything but when Vuk Remmington opens the door and Ashly finds himself face-to-face with his imposing, frighteningly handsome werewolf mate.

Vuk is one of Shadow Creek’s fiercest guards and his alpha’s second-in-command. Naturally, he is suspicious of Ashly and the antidote he delivers. Fighting his hunger for the small, gorgeous, witty vampire proves impossible, and Vuk finds himself desperate to repair the damages his initial attitude has caused between them.

When Vuk and Ashly are ambushed by human hunters, one thing becomes clear: Vuk can’t live without Ashly, and Ashly will sacrifice himself to save his wolf.

Vuk demands to know the origins of the antidote. But the antidote is the least of Vuk’s worries when Ashly becomes the prime target for the hunters.

Review: This series gets better and better with every book. Ashly is a vampire given an important task. Deliver a box to Alpha Raul and guard it with your life. He meets Vuk, Raul’s second in command, and the meeting is tense.

To be honest Vuk is an ass to Ashly because Ashly refuses to give him the box or tell him what it is in it. It leads to Vuk not trusting anyone. Now while I understood Vuk’s protectiveness over his Alpha that did not excuse his behavior with his mate.

The action picks up as things start turning dangerous. Suspense, mystery, secrets, and some sexy times are all throughout. Fantastic addition to the series. Blurb: Wolf shifter Rex Vanderbilt has lived a life of luxury and privilege. That changes one fateful night following an attack by hunters that nearly kills him and his family. They seek refuge and protection at the private paranormal sanctuary, Shadow Creek. Rex discovers how little he understands his wolf’s blood after the strangest out-of-body experience in the presence of one particular shifter.

Devon Michaels is a great horned owl shifter and part of the Creek’s top circle of guards. He prefers solitude after a betrayal that nearly cost him his life. When Rex arrives on the manor’s doorstep, he instantly recognizes the rowdy wolf as his mate. He has no interest in the irresponsible, spoiled man, but Rex has other plans to win Devon’s affections.

When the Creek’s borders are breached by hunters and Rex is injured, Devon must make a decision. With the promise of another attack looming, time is running out. Can he let go of the past to protect his mate?

Review: So much tension between Rex and Devon you could cut it with a knife. Devon wants nothing to do with his mate. Yet Rex very much wants him. Cruel words are exchanged between the two and mistakes made until an attack brings them together.

Shadow Creek is a safe place for paranormals who are on the run can go. It houses a wide variety of creatures. I really liked this place as a refuge for all who have been kicked or hunted by hunters.

I loved this book. There was action, danger, mystery, tension and drama. I really enjoyed the fact that even though these two were mates they did not fall into bed right off the bat as is the case with most paranormal books. They each had issues to work out before that was able to happen.