Hi peeps! We have T.J. Land stopping by today with her new release Spare Parts, we have a great excerpt and a fantastic $10 NineStar GC giveaway so check out the post and enter the giveaway! ❤ ~Pixie~ 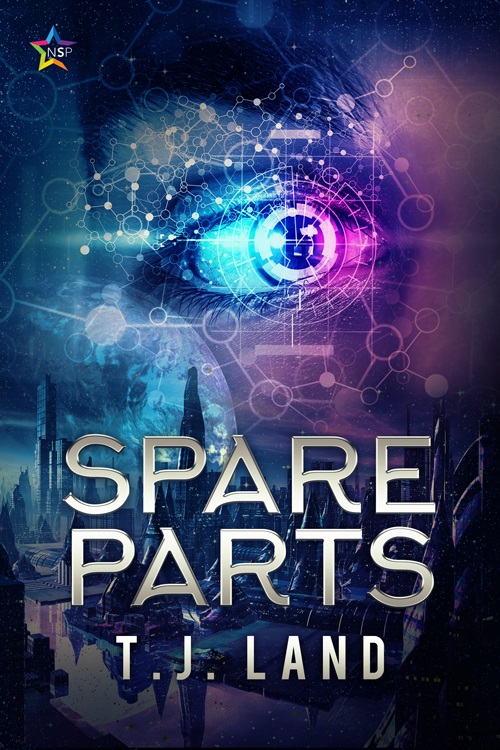 Ugh, organics are revolting. Damp, inefficient, prone to leaking—everything Meteor despises. The last thing he and his accomplices Gloss and Spike want to do is set foot on a planet infested with billions of the horrible things. To add insult to injury, to escape detection while on Earth, they’ve no choice but to disguise themselves as the aforementioned moist bipeds. The indignity is almost more than his circuits can bear.

But there’s no alternative. For centuries, Meteor, Gloss, and Spike were nothing more than three of thousands of robots programmed to serve the whims of a hyper-advanced intergalactic species. If they want to avoid being recaptured by their old owners, they need to find a weapon hidden millennia ago in Earth’s soil. Meteor’s ambitions, however, don’t stop at merely escaping capture. He’s got big plans for the species that built him to be a slave. Big, violent plans. And it’ll all work out perfectly provided he can keep reminding the other two of what they’re on Earth to do.

What they’re not there to do is have fun. But flighty, excitable Spike quickly forgets that.

What they’re not there to do is learn about kissing. But cold, analytical Gloss finds his attention drawn that way regardless.

What they’re not there to do is become human. But Meteor has spent several hundred years bored out of his mind and humans…well, damp as they are, they’re not boring. Which is a problem, because Meteor can’t afford distractions—not with their owners searching the galaxy for them and getting closer every day.

END_OF_DOCUMENT_TOKEN_TO_BE_REPLACED Blurb: The Prayer and her crew have been lost in space for four years. Thomas is lonely and homesick; Zachery is angry and mutinous; Rick is just terrified. And all of them are really in need of some hands-on time with their captain.

The only thing holding them together is their captain, an aloof, sharp-tongued man whose methods of keeping up morale are unconventional, but extremely effective. But now the captain has a choice to make: do they continue their fruitless search for a way home or try to start a new life in this strange galaxy?

Review: This is the first book in the Adrift series. The crew of the Prayer wants to go home after being transported mysteriously to an unknown part of space. They travel aimlessly for years hoping they will get closer to earth. After some time they have all but given up hope.

As expected the men look for companionship in these lonely times. Thomas, Echo, Zachary and Rick all hook up. I found it quite entertaining with these mixed personalities intermingling. The sex is hot and steamy.

The next installment is hinted at when the second in command talks the captain into landing on a planet. Good read with plenty of mystery and hot scenes to keep the reader entertained. Blurb: Now that the crew of The Prayer have settled down on an uninhabited alien world, their captain intends for them to forge a new life for themselves. But Khurshed’s plans are interrupted when the ship receives a distress call from a nearby planet. While most of his lovers are excited by the prospect of making contact with their new neighbors, First Officer Antoine argues that responding might endanger the crew. As it turns out, his fears are well placed…

Review: This book continues from book three. Here the crew and Captain are settling in and making good progress until they get a distress signal from Rux’s planet. They go to investigate and nothing is as it seems.

I loved this book as it delves more into the relationships between these men. Of course the sex is hot. I just wish they were longer. Blurb: Having welcomed an alien into his crew and his bed, the captain has more than enough to worry about without the looming threat of a birthday he’d rather forget. It’s just as well that his ship develops a catastrophic malfunction and crash lands before anyone can ask him how old he’s turning. But his good luck only lasts so long; when he and his men follow Rux to an abandoned city in search of replacement parts so they can effect repairs, one disaster follows another. Worse yet, Zachery, the captain’s most headstrong lover, is developing a crush on the one member of the crew he really shouldn’t…

Review: A malfunction causes the ship to crash land. Amid the repairs the captain is told Rux knows where he can go to get parts to fix it and so they head off. But all is not as it seems. There is unrest and a sense something is wrong.

I liked this action packed addition to the series. It had a lot of drama and action that had me on the edge of my seat. It was too short though and before I knew it the story was over.

Blurb: The captain’s luck is finally changing. After four years of being lost in space, his starship, The Prayer, has found an inhabitable planet to land on. The whole crew—and his lovers Thomas, Rick, and Zachery in particular—are happy to set foot on terra firma again, not least because the planet comes with plenty of trees to hide behind for those…intimate occasions. But the fertile landscape hides a secret. When the captain finds himself abducted by an alien life form, he’s got limited time to get back to his crew before they succumb to infighting. Only the alien is so very attractive…

Review: This is the second book in the Adrift series and picks up where the first lends off. They land on a planet not knowing there is intelligent life on it. As a result the captain goes missing and that leads to a search and a whole lot of sex going on. I loved how different each personality was and how they interacted.

There was a lot of laughing on my part throughout the story. It was a great adventure to be sure with some hot and heavy sex to add spice to a lost crew intent on making a home somewhere.

Blurb: No one knows why Oberon, king of the greatest fairy court in the world, doesn’t have wings. Not even his crafty lover, Puck, who prides himself on being privy to all Oberon’s secrets. But that’s about to change, for Oberon’s mother has revealed to her son that there may be a way to regain his lost wings—provided Oberon is willing to risk losing Puck…

Review: This is a nice and quick read and very enjoyable. This is the second book in TJ Land’s series, Faeries. If you haven’t read the first book, Midsummer Nights, you need to go back to book 1 because that is the short story where everything is set up.

In Midsummer Sky we pick up with lovers, King Oberon and his most trusted advisor, Puck. Yes – just like in Shakespeare. The lovers face a new challenge when King Oberon’s parents visit and we find out two things – 1) how Oberon lost his wings and 2) that Oberon’s father has the ability to reduce the centuries old king to act/feel like a child.

I have to admit that I am getting more interested in Queen Tatiana, whose marriage with Oberon was an arrangement between their families. She seems to have some hidden depths that I would like to see – she definitely has the potential to become a powerful ally for Oberon and Puck. Heck, she could even be a lesbian. I don’t know, I just think that there is more there.

I’m really loathed to do so, but the only reason why I rated the book as low as I have was that despite the fact that I enjoyed the characters and the story, I just feel there is a lot of unexplored depth that could give these stories a little more substance, even if they are only short stories.