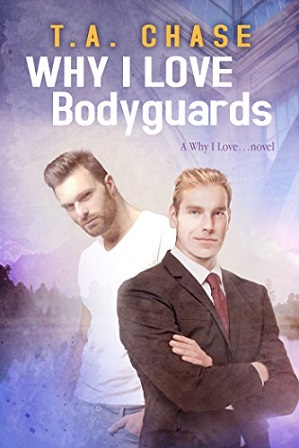 Blurb: Hilton Burke might be one of the most powerful men in the world, but he can’t get what he wants the most. Every time he sees Cathal McKinley, his head of security, Hilton wishes they could be more than just employer and employee. In fact, he might be in love with Cathal, even though they’ve never slept together.

Cathal McKinley accepts how much he wants his boss, but he’s pretty sure Hilton will never date him. They come from two different worlds. Now that he has to return to Sunburst, Montana, to deal with family problems, Cathal knows there is no chance for them to get together.Hilton and Cathal spent years dancing around each other, but when Cathal needs help the most, Hilton comes to Montana to support him. Soon they’re struggling with children and an old friend who won’t take no for an answer. Finally admitting their love out loud might be the least of their worries.

Review: Cathal had pretty much hated his father when he reached a certain age, but as a teenager or young man, not everything is the way it seems. When he found out that his father was dying, he left to take care of the family. His sister had basically got pregnant, dumped the kid, then took off. Now times that by three. He had two teenagers and a set of twins, then to his surprise she was pregnant again, well we know who is going to be taking care of the little one. To top it off the man he was in love with, his boss, might just be his after all.

Hilton might be the owner of everything and richer then sin, but he has a heart of gold. And his heart is owned by his head of security. A man he has not even let on, even though they both knew. When Cathal came with him with bad news, he knew his place was with him. Now just imagine two men with no experience with children, with two teenagers, two twins age six and a newborn. Then add in Herb in the mix, and wow is this going to be one funny story.

It has been awhile since I had read a story by this author and I had forgotten how much joy I get from her characters. Herb as always was a big hit with me, and I can’t wait to see more of him and the chickens. I hadn’t expected so much drama with the little twit of a friend of his, but it was all good when Hilton put her in her place. Best day ever is all I can say. This story caught my attention from the start and kept it all the way to the end. It gave me almost everything I could ask for in a story and quite a bit more. Although I will admit, that I didn’t really care for the cover.

Hilton was a big surprise for me and I got a kick out of him. I had a lot of fun reading this and look forward to many more books by this author. I would definitely recommend this story and can guarantee that it will be read more than once.

Title: Hearts On The Line

Blurb: Baxter and Addison are meant to die, but their love for each other won’t let them choose that future.

In 2134, the United States of America no longer exists as the super power it once was. Americans fight to keep from being completely conquered by their enemies. Scientists have begun to genetically engineer soldiers to fight the war. These men are stronger, faster and more impervious to injuries. The soldiers are created in labs, then once they are birthed, they are shipped to compounds where they are trained from their very first breath to fight.

Baxter and Addison are two such soldiers. They are from different compounds, but they serve in the same unit. Baxter isn’t the most intelligent, and he knows it. His job is to kill the bad guys, and not to do anything else. Addison understands his place in the world, but he finds he wants more at times. He doesn’t want just to be a killer. He wants to have some other kind of life, and he’s discovered that he wants his life to be with Baxter.

When their unit decides to make a desperate run for the border and freedom, Baxter and Addison only have the certainty of their love to get them through the dangers they are about to face.

Review: This story was previously published by Amber Allure.

After having read so many stories that were either not very well written, too dark or just bizarre this story was a breath of fresh air. I have always loved T.A.’s  books so I knew that it would be a hit. Now, I am not one who normally likes sci-fi stories or even futuristic ones, but this one rocked. You would not see it from the cover, but this one was pretty amazing. The blurb was what caught my attention and it didn’t let me down.

In the year 2134 our world is no longer what it used to be; war has taken over, killing many and America’s struggle to just survive what has happened. To help fight, biogenetically engineered men were created to fight. Addison is the leader of their men, whereas Baxter is the second in command. They are strong fighters but there is something that makes them different. Even though they were created in different areas, they ended up fighting for the same unit. Addison shows his care for Baxter, when Baxter had been injured earlier on. It would seem those who are badly injured or just not wanted are killed off. Addison had done everything he could to keep him with him.

Baxter has felt the same for Addison but he thinks that he is not worthy of such devotion. Baxter knows he is not as smart as the others and is basically a good killer, but you can see his heart right off the bat. Whereas Addison wants more for them both. And their unit makes the choice to stop fighting and to run for freedom. It would seem the humans are starting to fear them and have placed them into even more danger. Now it is time to seek freedom.

The writing was fully developed and detailed that it felt like I was right there with them. I loved the characters and how much depth that there was. The romance was light, sweet and tender. This might be the story that will show me a different look at sci-fi and futuristic stories.

I had a lot of fun reading this and look forward into reading some more by this amazing author.

Hi guys, we have T.A. Chase visiting us today with her newest release The Unicorn Said Yes which is part of the Unconventional in San Deigo anthology, we have a fantastic guest post from T.A.,  we have a great excerpt,  the brilliant Pride Publishing giveaway and we have Lisa’s review. So guys enjoy the post and then click the giveaway link <3 ~Pixie~

Is it possible for a soul to be reborn inside another?

What would you do if you discovered someone harboring a soul you recognized as one from a deceased loved one? For vampire Roman Gschwind, the scenario becomes a reality when he meets Bodi Rain.

‘Coming in Third’ by Amber Kell

Jovan and Luka have been searching for their third for years. When Niall stumbles into the bar, their shifter instincts tell them the innocent fae could be their long sought mate. After a sensual night together, they’re certain the beautiful man was fated to be theirs.

When an innocent human virgin meets the king of the unicorn herd, it’s not just legends that come true.

As the unicorn king and the virgin begin to fall in love, there are darker forces working behind the scenes to take advantage of the unicorn legends for their own evil purpose. Neither Ivan nor Carney are safe alone, but together, they just might be strong enough to keep Ivan alive.

‘Blood on the Moon’ by Jambrea Jo Jones

Be careful what you wish for, especially when you’re a witch.

Can a witch and an incubus solve the mystery before one of them dies? The blood on the moon wasn’t the only thing they had to worry about. Meddling family, close calls with death and a missing witch are enough to keep anyone busy, but can Kishar and Montague still find time for love?

‘A Silver of Sunset’ by Devon Rhodes

From one-night stand to nurse and patient—is it crazy to expect more?

Dominic can’t believe his luck when bravely striking up a conversation with the hottest guy he’s ever seen leads to the best sex he’s ever had. When he wakes up—no surprise—Angelo is gone. A week later, he’s shocked when he walks in to meet a new oncology patient to find Angelo fighting for his life and dependent upon his care.

Will their timing ever improve, or will Angelo’s time run out before they get a chance?

Like the sound of the Unconventional in San Diego anthology? Buy it here.