Ian Start is an art professor and poet, living and teaching in Providence, Rhode Island. After suffering an infection in his leg that left him disfigured and traumatized, he’s been struggling to regain his emotional balance and find his voice again in his poetry.

It doesn’t help when one of his students is murdered, and he’s implicated. The chemistry is still there between Ian and Jake, who is his ex and the investigator, but being a suspect presents a barrier to their reunion.

Furthermore, Ian’s injury left a massive scar, both physically and emotionally. He is not convinced anyone else should have to live with his disfigurement and his nightmares.

Start to Finish, Pamela A. Williams © 2020, All Rights Reserved

As I hobbled to the door, I could see, through the leaded glass, a stout Black man in a dated tweed blazer. He was staring intently at my approach, which made me wish that I was dressed in more than a robe and flannel pajama bottoms. Opening the door, I saw that there was a second man, a few steps down, looking out toward the street. “Professor Ian Start?” said the man in front of me.

“Yes?” I said, tearing my gaze away from the familiar pale ginger head.

“I’m Detective Henry Ransom from the Providence Police Department. May we have a few minutes of your time?” At that point, the tawny head turned, and it was, as I knew it would be, Jake. Right on cue, Ransom said, “This is Detective Jake Quinn.” Our eyes met and held. In the moment, I was delighted to see him. But in my moment of pleasure, I could see wariness and warning in his eyes, a slight shake of his head that clearly said don’t acknowledge. I immediately assumed there were some gay identity issues at play and kept my trap shut. Everyone knew I was gay, but I was well aware of guilt by association.

“Yes, of course, come in. We were just having coffee. Can I get you a cup?” Ever the perfect host, eh? With no small amount of trepidation, I led them to the kitchen where Rita was sitting at my little table. It looks out over a small terracotta-tiled patio with a wildflower garden beyond, looking bleak and dead in the frigid morning with black stems and flower heads that hadn’t been tended to before the winter frosts.

“Yeah, coffee would be good,” said Detective Ransom. I raised my eyebrows at Jake, who merely nodded. I knew he took it black but inquired of both anyway. Rita introduced herself, and they all shook hands. I didn’t get a handshake. I began to feel very nervous. My knuckles started to prickle.

Rita rents my street-level apartment. Short and trim, with crazy hair from an indeterminate ethnic background, she’s my closest friend even if she is a social worker. I had an overload of social workers during the time I was in the hospital, all telling me how fucked up I was going to be when I got out. After that, I swore off them permanently, but Rita was the exception. Despite our connection, Rita was a little bit of an enigma; quiet as a whisper, I never heard music or a loud voice from her apartment, so it was hard to tell if she was home or not, and I never knew if she had company because she apparently didn’t keep regular hours. But every Sunday morning without fail she’d be at my back door with croissants and hot chocolate and dressed in tight stretchy sportswear, perfectly comfortable with me in pajama bottoms and my faded silk robe. And that’s how a Sunday morning found us, the second of January, a sunny, cold winter day, when we heard the knock at the front door.

“I’m going to head back downstairs, Ian. If you need anything, just call.” And then she was gone. Cops can do that: clear a room instantly.

I poured two cups from the carafe and retrieved a carton of milk from the refrigerator for Ransom, letting him pour. “What’s going on?” I asked.

Ransom spoke. Jake didn’t say a word. “You are acquainted with a Thomas Wilson.” Statement, not a question.

“He was a student of mine, yes.” The answer to the nonquestion.

“Was?” Ransom asked, a hint of a challenge in the tone.

“When was the last time you saw him?” Again Ransom. Christ. This was bad. I was going to hear that Thomas was missing. Missing or hurt, or…no, not going there. My stomach roiled a little.

“What’s going on?” I asked again. And in nearly a whisper. “What kind of detectives are you? Missing persons?” Yeah, like there are missing persons detectives. I was hoping for the best out of the only other option.

“Homicide,” said Ransom. I sat down hard on the nearest chair. Ransom then asked again, “When was the last time you saw Thomas Wilson?”

No, I do not want to hear what’s coming. “The last day of class. Um, the twelfth, I guess. He helped me load portfolios into my car. Are you telling me Thomas is dead?” Jake nodded but said nothing. “Are you sure? Sure it was Thomas? What happened? When?” They were wrong, had the wrong kid, were talking to the wrong instructor. I stared uncomprehendingly at Ransom. I couldn’t meet Jake’s eyes at all. I felt helpless. My knuckles began to itch, and I distractedly scratched at them. 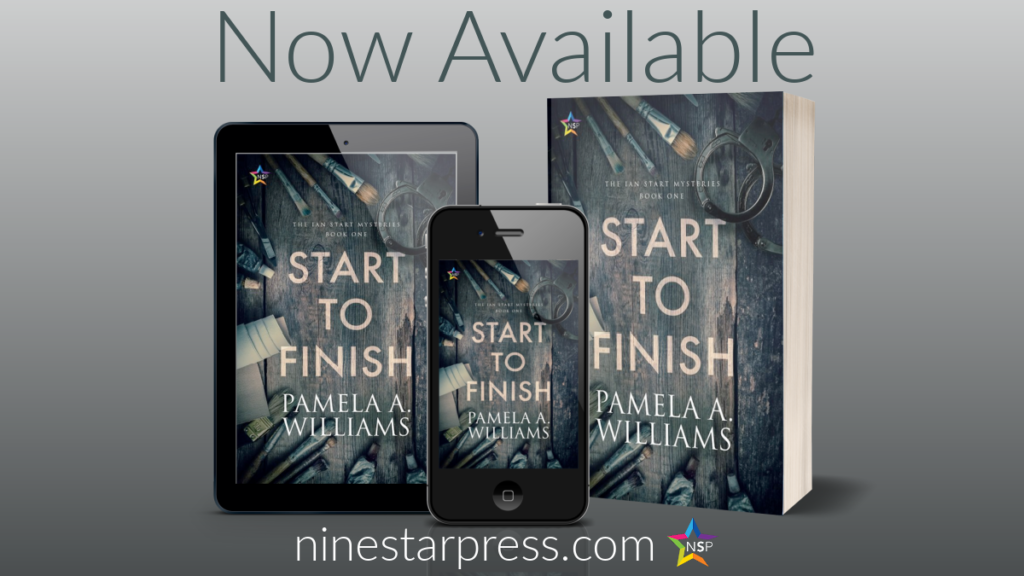 Pamela A. Williams is a Clinical Social Worker living and working on the Southcoast of Massachusetts. She is the daughter John E. Williams, winner of the 1973 National Book Award for Augustus. She has always had writing in her blood but has only lately found the serenity and confidence to put pen to paper (or fingers to keyboard, if you will).

Ms. Williams comes from a widely varied background. She’s worked in manufacturing, retail, graphic arts and the mental health field. She tries to bring these experiences to her writing to create well rounded, believable characters. And she remains forever honored and grateful to her clients who have shared their personal stories and broadened her view of humanity. She is awed by their resilience and trust.

She lives with two cats, of course.