Hi guys! We have J.S. Fields popping in today with her new upcoming sci-fi release Tales from Ardulum, we have a brilliant guest post from J.S. where she shares a short fiction, a great excerpt and a fantastic giveaway, so check out the post and enter the giveaway!❤ ~Pixie~ 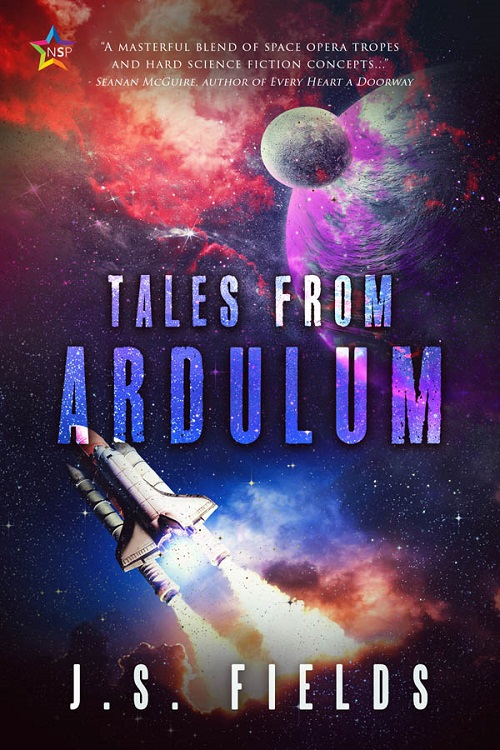 TALES FROM ARDULUM has a lot of fun shorts, but there were some really short shorts that didn’t make it in. The below idea came from my editor, the amazing Sasha Vorun, of Ninestar Press. It’s as canon as you want it to be. I’ve always daydreamed about the being who commissioned the singular Lucidity and what that person had in mind. It was always meant to be a sort of ‘I have too much money and like things my way’ ship, but how, then does it end up at a shipyard in the middle of the Alliance?

This is a story about a cute little acorn ship for a very eccentric Keft, and maybe also a bit about Salesblob’s extended family.

(Salesblob gets fan mail. I love you people)

“Okay but what about green? Have you considered polka dots?” Vas E’Nud, a Keft gatoi in a blue and red polka dotted dress, crouched down to inspect the underside of the silver acorn shaped ship that had just been delivered. Zie’d ordered it over a year ago, from a specialty manufacturer on the other side of the Alliance. Same style as most Keft ships, of course, one didn’t want to stand out too much, but with some very significant upgrades.

A man of nondescript bipedal origin scratched the side of his calf and frowned. He let the spray gun in his hand fall to his side. “I have four color options, friend. Green, black, and two shades of something called ‘pomegranate.’ If you want anything else you have to special order it.”

“Oh I will.” Zie waved the man off and stood. The interior was set–that was all factory install. Where the standard Keft ship was mostly cargo hold, Vas had expanded the galley and added a game room. The ‘stem’ portion of the ship had been ballooned as well, giving more of a vestibule appearance to the cockpit, which could now easily seat four in the plush chairs zie’d had installed. Each of the five sleeping quarters had their own small universal lavatory that would service anything from a gelatinous zooplankton to a Mmnnuggl.

And carpet. Oh, the carpet. Deep, plush, and a different color for every room. Vas lovedcarpet. Digging your bare toes into those springy fibers felt like a moss that wasn’t crawling with bugs. The walls were all painted, too, some even with paneling. The interior was perfect.

Which was why the exterior was such an issue.

Vas paced around the ship, sitting on its own in the center of zir private docking port the largest of Keft’s orbital stations. Zir grandfather owned this station and three others and Vas could berth the ship wherever zie wanted, but this port had the best view of the wasteland planet of Keft. Vas had never visited but had seen plenty of photos. The ship–zie really needed to name it–felt like a gift to zir ancestral homeward. Something beautiful to look at, in the sight of something so ugly.

“Something shimmery,” Vas muttered to zirself. “Not too bright, but it should catch the light. Maybe I could highlight the fins–why is this here!?” Zie punched a small indent where a laser port fanned from the biometal. “I didn’t order weapons! What a waste, and what a ruin of lines. What am I going to shoot at? Keft planetary flotsam?”

Zie kicked the side of the ship for good measure, which only succeeded in hurting zir toe. “Quirky Quells Custom Shipyard,” Vas spat into zir communicator. “And I want to speak to Quell, not a sales rep.”

The pocket comm pinged a moment later, and a yellow blob of semi-viscous goo appeared on the screen. A singular stalk rose from the center of the blob, one eyeball rolling in circles on the tip. “Vasssssss,” Quell greeted. “Problemssss?”

“Weapons?” Vas asked, and flashed the comm at the ship. “I didn’t ask for that.”

“But they ruin the lines of the ship, Quell!”

The yellow goo rippled and then spat a… piece of itself, into the air. The goopy tear landed back on the mass and reabsorbed. Quell was the best ship designer in the Alliance, no question, and it was a credit to his business that he didn’t mind taking commissions from such a far border world as Keft. But Vas wanted the ship zie wanted, and zie wanted it done right.

Vas gave a much belabored sigh and shook zir head. “No. I want my ship. Scrap this thing. I don’t care where it goes or what you do with it. Don’t even bother stripping it down. I want a whole new shell and I don’t want to reuse anything from this trash. This time, we’re going to go over every inch in detail. This time, we’re going to do it right.” She is nothing, anymore,” the president responded. “She is Exile.”

“You can’t!” Neek burst towards the door just as it slammed closed. She rebounded and fell back to the floor, her tailbone taking the brunt of the fall. The ship’s engines began to whine, and the floor jostled as the craft left the surface.

Neek ran to the controls and slammed her hands on the stuk interface. Through the viewscreen, she saw capital buildings, the Ardulan Temple, and then treetops as the skiff left the city and moved to the suburbs. She tapped command after command into the computer, but each try brought an angry beep and no change in course. The ship was on autopilot and password locked. She had no control.

Neek swallowed, trying to ease the ache in her throat. Wherever they stashed her, she would find a comm. She would smuggle out handwritten messages if she had to. She wasn’t going to give up. That she had lost the robes, lost the Guard…she could mourn that in time. Saving the forests, that was her job. Helping her people move beyond Ardulum so they could truly participate in the Charted Systems, that was why she did all this, right? That she loved piloting was just a bonus.

A low tremble went through the ship. Neek had never felt a skiff do that before. Had she lucked out? Was it malfunctioning? Neek sent another query to the computer. The ship was…

Neek blinked. It couldn’t be.

The ship was going up.

Neek frantically queried the computer. The viewscreen still showed treetops, but that silo in the distance…that had been there the first time she’d looked. It had seemed closer for a while, but now, she realized as she squinted, it was far away again. She was watching a prerecorded loop!

“No!” The skiff was clearly going up. Neek’s ears were popping, and there was a funny feeling in her gut. Her planet’s skiffs were not designed to leave even the lower atmosphere. Only settees could do that, and this was no settee. Whatever the president’s engineers had done to make it spaceworthy, it hadn’t been nearly enough.

Neek threw commands at the computer. Land. Coast. Glide. STOP. Each returned with a ping and the perpetual image of treetops. He couldn’t do this. He had no right to do this! What in Ardulum’s name was the president thinking? Neek pounded at the controls, and the recorded loop fuzzed out to reveal space. Endless space.

Text scrolled across the computer screen:

Neek screamed. She kicked the console, her boot denting the cheap biometal. The Neek did not leave their planet. They did not live on space stations or strange worlds. They stayed put, to wait for Ardulum’s return. And she…she was meant to rot up here, in Neek space—rot while watching a planet she could see but never again touch. Rot while the Heaven Guard executed flawless formations in Neek’s upper atmosphere, ignoring her gold coffin spinning by. Rot while reading texts she’d had shoved down her throat since she was old enough to read—texts that were slowly destroying her planet.

She would never get her settee.

She was only nineteen years old, and she was going to die, alone, in space.

And there was nothing she could do.