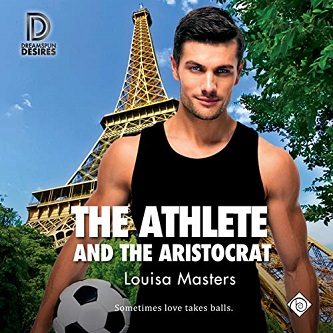 Title: The Athlete and the Aristocrat

Review: The Athlete and the Aristocrat by Louisa Masters is the author’s most recent contribution to the Dreamspun Desires line by Dreamspinner Press. This is a book that I really enjoyed reading and so loved being able to relax, listening to the audio narration of this book.

Master’s writing is really appealing to me because it is the writing style just takes me in and I feel an instant connection to the characters. Although this book is not part of a series by Masters, we are brought back into the world of European elegance and riches which we first encountered in The Bunny and the Billionaire and even get to check in with three of the characters from that book. For me that was a bit of a thrill.

As for the narration, I really enjoyed it. The narration was performed by Seb Yarrick. To be perfectly honest it’s taken me a few books to fully get on board with Yarrick’s performance, although I wonder if it is just a case of perhaps me not being sold on Yarrick’s suitability for the ones that I didn’t really like. Regardless, I have absolutely no complaints about the narration. I enjoyed the voice he gave to both MCs and I really felt the emotion between the two men come through in the voice and tone.

The story itself is quite simple. A hot, rich, powerful, smart aristocrat and an equally hot, rich, powerful and smart athlete are thrown together when the titular athlete wants to set up a new foundation for children in need who do not have the access to equipment or their parents don’t have the time or money to allow kids to follow their dreams. It’s all noble intentions and I’m a complete sucker for it.

The Athlete and the Aristocrat introduces us to retired professional footballer Simon Wood and billionaire of the highly influential Morel family and their corporation, Lucien Morel. The little bit of cuteness in their background is that Lucien secretly had a crush on Simon while Simon was playing soccer and in fact convinced his father that Simon’s proposal for a charity had just as much merit as a charity for education and food for kids from struggling families. However, these guys have a bumpy road to their HEA, which is what kept me intrigued with this story. There is no doubting the attraction between Simon and Lucien, however, they did need to take time to get to know each other before taking the risk of mixing business with pleasure.

I think this story has a series of popular themes which will satisfy anyone who is attracted to these types of romances that include the whole fairy-tale ending for the brooding rich guy and the kind-hearted guy that steps into his life.