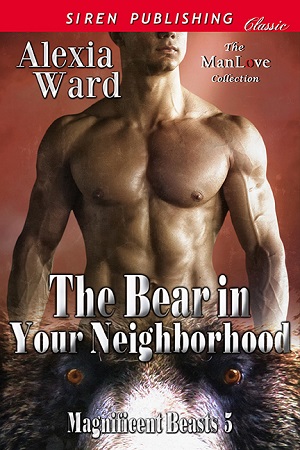 Title: The Bear in Your Neighborhood

Blurb: Jeffrey Stone has no clue he’s just moved into an all-shifter neighborhood until he crashes into Alex Cruz’s fence. When the giant grizzly bear shifter comes out raging, Jeffrey tries to make peace. He offers to pay for the repairs and hopes they can become friends. But that’s easier said than done, because his new neighbor has an attitude problem.

Could things get any worse for Alex Cruz? First the shop he works at burns down leaving him jobless, then his dumb human neighbor, Jeffrey Stone, damages his expensive fence. He is boiling mad, but can’t stay angry for long. His new neighbor is so damn cute. The harder Alex tries to push Jeffrey away, the more drawn to him he becomes.

Unperceived to them there’s a killer nearby who has set his eyes on these two neighbors. Can Alex keep Jeffrey, the human he’s falling for, safe from the killer’s deadly strike?

Review: Each book in the Magnificent Beast collection features a new romantic couple. To enjoy the overall story arc and crossover characters, I would recommend reading the series in sequential order.

Jeffrey and his two best friends have decided to move in together as well as work together. He just had not expected it to be an all shifter neighborhood, seeing as him and his friends are human. Of course finding out was after he ran over his neighbor’s fence and pretty much drooling over the man.

Alex has an amazing family but that is about the only thing going good for him. His work burns down and he is left without work, and now his new neighbor has taken out part of his fence. Could anything else go wrong, oh wait the answer is yes.

The story starts off pretty good but goes downhill fast. They meet in a crazy way which is all good, but then it just moves at a fast pace. They go to the store for Jeffrey to pay for the fixings on the fence, end up in bed and damn they are in love. The story felt very rushed and too short. Then the assassin, well lets just say I wouldn’t hire him.

The story had a great idea but the follow through just went out the door. There were a few editorial problems that I saw but nothing major. The characters just didn’t spark any interest in me, at least not them together. The whole story just felt off to me.