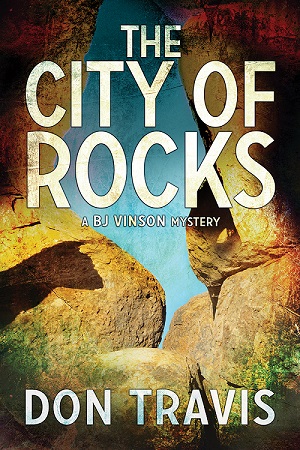 Title: The City of Rocks

Blurb: Confidential Investigator B.J. Vinson thinks it’s a bad joke when Del asks him to look into the theft of a duck… a duck insured for $250,000. It ceases to be a funny when the young thief dies in a suspicious truck wreck. The search leads BJ and his lover, Paul Barton, to the sprawling Lazy M Ranch in the Boot Heel country of southwestern New Mexico bordering the Mexican state of Chihuahua.

A deadly game unfolds when BJ and Paul are trapped in a weird rock formation known as The City of Rocks—an eerie array of frozen magma that is somehow at the center of the entire scheme. But does the theft of Quacky involve a quarter million dollar duck-racing bet between the ranch’s owner and a Miami real estate developer, or someone attempting to force the sale of the Lazy M because of its proximity to an unfenced portion of the Mexican border? BJ and Paul go from the City of Rocks to the neon lights of Miami and back again in pursuit of the answer… death and danger tracking their every step.

Review: This series involves our sexy P.I. and quite a bit of crazy charactes. Now this can be read as a standalone, but I would suggest reading in order. It gives you an insight into Private Investigator B.J..

Quacky Quack the second has been ducknapped. She is worth a quarter of a million dollars, well that is what the insurance is at. I think the old bird is in for it, but then again her owner wants answers. She wants her prize duck back, so she wants B.J. to find her. The thing is the insurance agent got to him first, so we will see. Did Lizard lips get murdered for the bird or for something more drastic.

B.J. is on the trail of the ducknapper’s killer. However it could be anyone on either side of the fence. Is it the duck-racing, drugs, guns or something even more sinister, one could only guess. It leads our sexy investigator and his lover on a danger pursuit.

Now who names a duck Quacky Quack, well a woman with the name Mud. She is old bat herself, and prides her downfeathers and if a little racing is done, who is to know. It would seem almost the whole state knows, except for the insurance company. At first I was like B.J., laughing my ass off about a duck being ducknapped. But it got real serious with the murder, attempted murder and well your going to have to read the book on this one.

This has many twists and turns to it, that you will definitely be entertained from it. It was like being right there to witness it all. Is the duck pate now or is she still alive, hmmm never had duck before. It has a very tight mystery going on. I do love the little wisp of romance between B.J. and Paul that you get hints of. There is no real romance going on in the story, just hints and behind the sheets. It caught my attention from the start and kept it all the way to the end.

Fascinating tale with just a bit of humor to it. I never knew one could get insurance on a duck, but I guess anything is possible. I had a lot of fun with it and can not wait to get my hands on the next book.