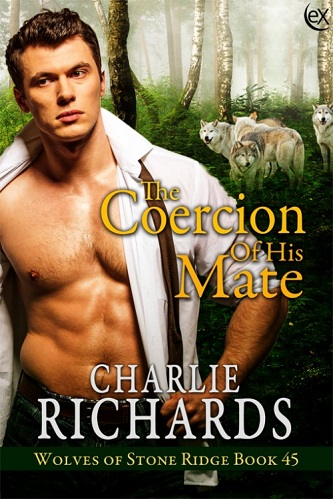 Title: The Coercion of His Mate

Blurb: Gracen Robicheaux felt his petition to fight for the beta position of the Stone Ridge, Colorado wolf shifter pack was a sign from the gods. After over two hundred years, he could finally openly express his desire for a male mate. When Gracen runs into the human Lance Coracans, he changes his opinion. The gods are laughing at him. His worst fear has come to pass—kids. Lance has a very young daughter for whom he’s fighting for custody. Still, Gracen reminds himself that Lance is his mate. Embracing change will be worth it. However, between an injured babysitter, a sick daughter, and pack challenges, their missed and rescheduled dates are piling up. Can Gracen convince Lance that he really is serious? Or will finding out he’s a wolf shifter be the straw that sends Lance running?

Review: Each book in the Wolves of Stone Ridge collection features a new romantic couple. To enjoy the overall story arc and crossover characters, I would recommend reading the series in sequential order. This series started it but there are many branch offs that are connected to this particular series.

Gracen has found his mate, a mate that not only is not gay but has a child. He also has no clue that Gracen is a wolf shifter, I would say his eyes are about to be opened wide.

Lance actually knows a few of those Gracen hangs out with but has no clue that half of them are shifters of one kind or another. He is a sexy dad who just wants to keep custody of his two year old daughter.

I had expected a bit more trouble from the ex, it went as expected. I have always loved these stories but there are no more surprises to be found in them. I was hoping for a fresh idea to show up but even then these stories are still pretty amazing. I love how the characters just feel around each other. I didn’t really catch a connection through the kid and Gracen though. There just needed something to make it all come together and I didn’t get that. It just felt a bit stiff.

Other than those issues I still had a blast reading this and can’t wait to see what the next book by this author will be about.