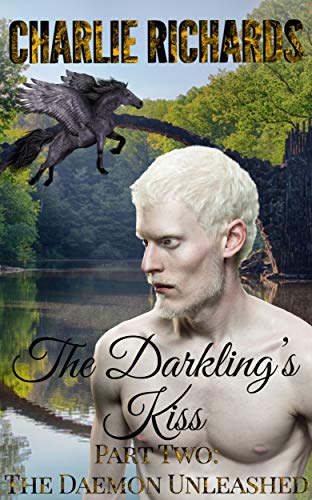 Blurb: For decades Philippe has lived the life of a thief, keeping apart from society. He steals items for customers…for a fee, of course, which has earned him wealth enough for several lifetimes. Due to his mixed heritage, a volatile mixture of human, angel, and daemon blood—a creature called a darkling—his job is his solace. After a disastrous encounter with a wizard, Philippe has a choice to make—live the rest of his life on the run or commit to a single task to gain a clean slate. Either way, his thieving days are over. Philippe accepts the Council of Wizard’s terms.

He finds himself traveling with Kalylle, a wizard of the second order. Their task is to clear up a disagreement between the dwarf and elven nations, as a war between their peoples would tear Fidelia apart. To Philippe’s surprise, he discovers an unexpected kinship with Kalylle—an attraction that offers both danger to their mission and hope for a future. Except as they run up against one obstacle after another, it becomes clear that a third party is involved, someone with powerful magical resources. Can Philippe overcome the urges of his daemonic heritage so he can complete his quest with Kalylle, or will the machinations of rogue wizards cause him to lose himself to the daemon living inside him?

Review: Philippe runs into trouble in Croo and has a piece of his soul taken. In the aftermath he struggles to reign in his daemonic half without his angel half. It seems that whoever wants a war is trying to make sure Philippe is taken out of the investigation. With Kaylelle’s help Philippe finds some measure of control as the continue their investigation of the missing blade and the culprit wizard trying to start a war.

I loved this story. Adventure and mystery surround Philippe and Kaylelle as the two grow closer. I like the way the investigation is coming together as the pieces are aligning slowly pointing to whoever is behind everything.