Hiya peeps! We have E.J. Russell popping in today with the tour for her newest release The Druid Next Door, we have a great excerpt and a fantastic giveaway, so check out the post and leave a comment to enter the giveaway! <3 ~Pixie~ 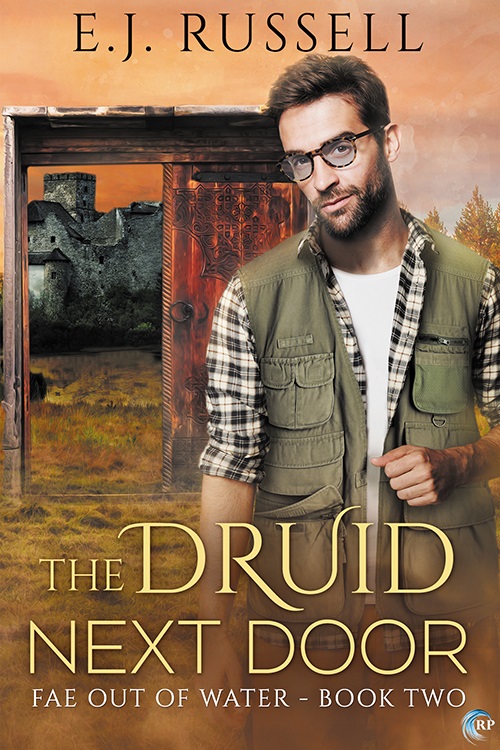 The Druid Next Door

Professor Bryce MacLeod has devoted his entire life to environmentalism. But how effective can he be in saving the planet when he can’t even get his surly neighbor to separate his recycling?

Former Queen’s Enforcer Mal Kendrick doesn’t think his life could get any worse: he’s been exiled from Faerie with a cursed and useless right hand. When he’s not dodging random fae assassins in the Outer World, he’s going toe-to-toe with his tree-hugging neighbor. And when he discovers that the tree hugger is really a druid, he’s certain the gods have it in for him—after all, there’s always a catch with druids. Then he’s magically shackled to the man and expected to instruct him in Supernatural 101.

Until a mysterious stranger offers a drunken Mal the chance to gain back all he’s lost—for a price. After Mal accepts, he discovers the real catch: an ancient secret that will change his and Bryce’s life forever.

Ah, what the hells. Odds are they won’t survive the week anyway. Bryce MacLeod stoppered the last water sample and carefully settled the test tube into the rack in his satchel. He’d run the preliminary tests in his home lab before he shipped them off for official analysis, but they were bound to be perfect—all the beneficial microbes in place, water quality well within the standards he’d specified when the reclamation project began four years ago.

The preservation of the wetlands and the adjacent woods, named in his grandmother’s honor, were the result of years of environmental activism and fundraising. He knew it was fanciful, not fitting an environmental studies professor, but he swore he could almost feel the fragile ecosystem knitting around him, the scents of plants in each appropriate stage of growth and decay, the buzz and whine of insects, the chirp and flutter of birds, the sunlight glinting off the water under the reeds.

He remembered how he’d cried as a boy when his grandmother had told him there were no wild honeybees in Oregon anymore, that they’d been killed off by a mite introduced by an illegal import of infected specimens. That, along with the love of the land she’d instilled in him before her death when he was barely twelve, had shaped his life, his career.

He sighed. His sabbatical had been ideal for finishing up this project, but it had sucked big time when it came to his social life—not that he had much of one anyway. Being a Myers-Briggs one hundred percent introvert pretty much guaranteed that. But at least when he was teaching, he spoke with other professors, interacted with his students, had a reason to get out and exercise his vocal chords and practice his minimal social skills. Now that the majority of the labor on the wetlands was completed and he was no longer managing work crews, he’d turned into a virtual hermit. It was rather disquieting how much that suited him.

“Probably start talking to myself next,” he muttered to the Steller’s jay perched on the branch of a nearby crabapple.

He made his way along the berm that cut a wandering path through the wetlands, carefully designed to allow access without disturbing any plants or habitat. He slowed when he rounded a clump of thimbleberry to see a blue heron standing in the shallows amid the cattails. He hunkered down in the shade, hardly daring to breathe as the bird dipped its bill into the water. So beautiful.

He’d been waiting for a moment like this since he’d begun lobbying for the project.

He caught a flash of motion out of the corner of his eye and turned to see an emaciated coyote approaching through the underbrush. Bryce didn’t want to do anything to drive the heron from the area, but he didn’t want it to fall victim to the coyote either. He straightened, hand reaching out to rattle the thimbleberry branches, when a beer bottle rocketed across the water and struck the coyote in its washboard ribs.

The heron flapped away, squawking its distress, as the coyote bolted for the woods. Bryce whirled in time to see his surly next door neighbor—Kendrick, M., according to the tag on the mailbox—standing ankle-deep in the slough, laughing like a loon. Under Bryce’s stunned gaze, the bastard actually fist-pumped the sky as if he’d thrown a winning touchdown pass.

Bryce considered himself an even-tempered guy, the quintessential mild-mannered professor, but anger at his irresponsible neighbor boiled up under his sternum. He stalked over to the spot where the bottle had struck the coyote. Luckily, it hadn’t shattered, so he fished it out of elbow-deep water. If he hadn’t been afraid of damaging the fragile biosphere, he’d have sloshed straight through the water, slashing the reeds out of his path. Instead, he continued along the berm, his fury building with each step.

Marching straight up to the idiot on the bank, who was grinning as if bashing a starving animal entitled him to a medal, Bryce brandished the bottle under Kendrick, M.’s nose.

“What the hell do you think you’re doing? I could have you arrested for littering, let alone endangering the ecosystem. This is a protected site.”

Kendrick blinked as if he hadn’t even noticed Bryce’s presence. He probably hadn’t. Men this handsome never did. And this man was definitely in the top one percent of male beauty, with his square jaw, cleft chin, and model-worthy cheekbones. Stylishly overlong dark hair waved across his forehead and curled against the collar of his snug white T-shirt. At six three, Bryce wasn’t short, but Kendrick topped him by a couple of inches, and his shoulder width and upper-body definition marked him as someone who wrestled with more than test tubes and sloppy undergraduate lab notebooks.

Kendrick’s grin didn’t falter. “Did you see that? I nailed him. I never thought—”

“Yes, I saw.” Shit. The guy had a killer British accent too, a weakness of Bryce’s that he blamed on too much Masterpiece Theatre as a kid. Be strong. “I saw you purposely flinging dangerous refuse at a starving animal. What if the bottle had broken? The glass could have injured dozens of fauna. The health of this whole area is very precarious. We’ve only just—”

“Whoa, whoa, whoa.” Kendrick held up one hand, palm out, angling his body so that his other arm was hidden. “Sorry. I wasn’t thinking.”

“The rules about the wetlands and woods are clearly spelled out in the CCRs.”

“Codes, covenants, and restrictions. The by-laws for the whole development.” He tore off his hat, bunching it in his fist, and flipped up his clip-on sunglasses, the better to glare. “We’ve got a zero-tolerance policy for environmental negligence, let alone intentional pollution. It’s in the papers you signed when you bought the house.”

Kendrick shrugged his wide shoulders. “A little behind on my reading. Like I said. Sorry.” His tone of voice belied the words.

“I suggest you catch up, because we also have a zero-tolerance policy for ignorance.” Bryce pulled a notepad out of the pocket of his vest. “Since I’m on the board of the homeowners’ association, I’m reporting you.”

“Then we can put a lien on your house. Foreclose. And you’ll be out before you can do irreparable damage.”

“Flaming abyss, man, will you calm down? You’ve got a bigger stick up your arse than my self-righteous brother.” He flicked a finger at Bryce’s vest. “Fishing’s forbidden in your holy wetlands. I do know that much. How do you justify that to your fellow inquisitors?”

Bryce’s hands twitched, and he resisted the urge to pat his vest pockets. “It’s not a fishing vest. It’s a tactical vest.”

Kendrick smirked. “I suppose those are tactical pants.”

Bryce raised his chin. The pants with built-in kneepads (and more pockets) were practical, but not exactly man-magnet material. He looked like what he was—a science geek. “As a matter of fact, they are. Very useful in fieldwork.”

“I’m sure. What’s next? Tactical underdrawers?”

Kendrick barked a laugh. “Shite. You mean they actually make them?”

“Yes, but I don’t need them for my purposes.”

“If your purpose is being a nosy parker, you’ve got it nailed, mate.” He yanked the dripping bottle out of Bryce’s hand. “I’ll put this in the bleeding recycling, shall I?”

“Glass,” Bryce grumbled, wiping his hand on his pants.

“I know it’s glass. I don’t drink beer out of a flaming paper cup.”

“I mean you have to recycle glass separately from other waste. You always throw everything in the same bin. I should have reported you for that infraction already.”

“What are you, the bloody trash police? Why didn’t you, then?”

Bryce didn’t have a good answer for that, not one that he wanted to share with Kendrick anyway. He couldn’t exactly say I’ve been sorting it for you because I liked watching you walk out to the curb and bend over the bins. It had seemed a fair trade. But now that he’d had a chance to talk to the man, the bloom was off that algae.

“Maybe I wanted to be neighborly. Unlike some.”

Fae Out of Water Series!

Once upon a time, there were three brothers, nobles of the Seelie Court of Faerie, who set out to seek their fortunes. The eldest—

Nowadays, when tales are told in 140 character bursts on tiny LED screens, rather than spun out by the glow of a midnight campfire, even Faerie’s elite have to get with the program.

The Kendrick brothers have traded longbow for briefcase, battle steed for Harley, and enchanted harp for electric guitar.  But while they’re finding their feet in the modern world, instead of finding their fortunes, they stumble straight into love.

Check out Fae Out of Water!

E.J. Russell holds a BA and an MFA in theater, so naturally she’s spent the last three decades as a financial manager, database designer, and business-intelligence consultant. After her twin sons left for college and she no longer spent half her waking hours ferrying them to dance class, she returned to her childhood love of writing fiction. Now she wonders why she ever thought an empty nest meant leisure.

E.J. lives in rural Oregon with her curmudgeonly husband, the only man on the planet who cares less about sports than she does. She enjoys visits from her wonderful adult children, and indulges in good books, red wine, and the occasional hyperbole. To celebrate the release of all three books in the Fae Out of Water series, one lucky winner across all three tours will receive a GRAND PRIZE of a $50 Riptide credit!

Thanks for following the Druid Next Door tour, and don’t forget to leave your contact info!

(Entries close at midnight, Eastern time, on September 23, 2017. Contest is NOT restricted to U.S. entries.)

14 thoughts on “The Druid Next Door by E.J. Russell Blog Tour, Excerpt & Giveaway!”