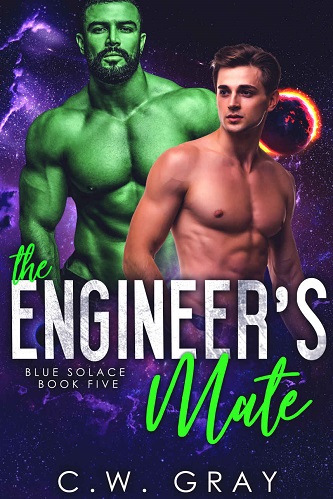 Beck Brackenstone is a simple Grell. He loves his family and friends and enjoys tinkering in his shop. His greatest dream is to meet his life-mate, settle down, and raise a bunch of babies. When he finally does meet his mate, he realizes how completely unprepared he really is. How do you court an assassin? How do you keep your brain from melting when your mate smiles?

Guild Master Beol is not a simple man. He runs one of the most prominent assassins guilds in the galaxy and has a troubled past. He has responsibilities and contracts to worry about and no time for a mate. When he meets Beck, that all changes. His Grell completely bewitches him and sparks something inside him that he thought died a long time ago. The problem is that Beck has secrets that even his most trusted friends don’t know, and Beol has some major trust issues.

The two men may appear to be a horrible match, but in truth, they are perfect for one another. Unfortunately the Crellic Queen and Humans First are terrorizing the galaxy and Charybdis Station is their next target. They will need to trust in one another and their friends to end the Queen’s path of destruction once and for all.

Review: Beck’s best friend always thought and said that Beck needed a soft and gentle mate for the big guy. He is a sweet young man that turns into a darling animal but he does more than that. He has hidden a big secret from all of his friends and his family. He is making robots that have feelings and thoughts of their own. Rus is his son but he was made to be a warrior, to his father’s surprise, he wants to be a cook. Beck wants at least eight kids but never expected it. Well he might just get a mate that can have them. His poor best friend is going to have a melt down.

Beol is not sweet and gentle, well unless he is around his sexy mate. Now if he could just get him to set down long enough to talk, well without burning the house down. Beol is the head of the most dangerous and prominent assassins guild for the galaxy. His brother and himself were raised by the old leader and lets just say their father was one cold man. Their mother was just as evil. Now he has a mate and damn if things were not looking up.

With the Human Firsts and the queen causing terror in the galaxy they are going to need all the help they can get. They have death and fire on their side, it might just work. They are in for a bigger surprise.

The worlds are turning out pretty sweet. I love what this author has created and their characters just pop out at you. Beck and Beol are just the best couple one can see and their friends rock. They seem to be protective as hell, and lets face it the guys need quite a bit humor with all the kids they keep ending up with. This story as the previous ones had, caught my attention from the start and kept till the end. In fact I read this story three times before even starting this review.

I can also guarantee that it will be read many times more. I had a blast reading this and can’t wait till the next story comes out.