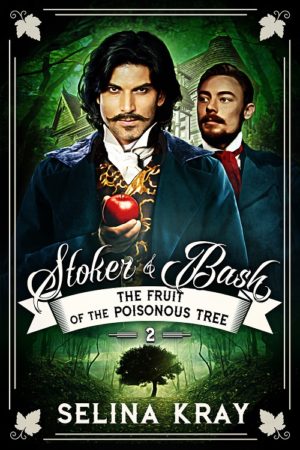 Title: The Fruit of the Poisonous Tree

Blurb: When will She open Rebecca Northcote’s box?

Finding lost poodles and retrieving stolen baubles is not how DI Tim Stoker envisioned his partnership with his lover, Hieronymus Bash. So when the police commissioner’s son goes missing, he’s determined to help, no matter what secrets he has to keep, or from whom.

When a family member is kidnapped, Hiero moves heaven and earth to rescue them. Even if that means infiltrating the Daughters of Eden, a cult of wealthy widows devoted to the teachings of Rebecca Northcote and the mysterious contents of her box. The Daughters’ goodwill toward London’s fallen women has given them a saintly reputation, but Hiero has a nose for sniffing out a fraud. He will need to draw on some divine inspiration to rattle the pious Daughters.

Like weeds gnarling the roots of Eden’s fabled tree, Tim and Hiero’s cases intertwine. Serpents, secrets, and echoes from Hiero’s past lurk behind every branch. Giving in to temptation could bind them closer together—or sever their partnership forever.

Review: This is the second book in the Stoker & Bash series and can be read as a standalone but I’d advise reading The Fangs of Scavo to get the background of both Tim (Kip) and Hiero.

As we re-join Bash and Stoker we discover that Stoker isn’t happy with their work, after having an exciting role in The Fangs of Scavo he’s frustrated with the cases they have been taking part in. But now Stoker has been tasked with finding the police commissioner’s missing baby son. Stoker is excited with the promise of writing his own ticket when he solves it but he’s been sworn to secrecy, even from telling Bash.

Bash swears to move heaven and earth to find Callie’s mother when she disappears during a day out, with his eye on the Daughters of Eden as the culprits the gang set out to rescue Lillian from their clutches.

Stoker’s and Bash’s paths cross and they end up teaming up, but with Stoker still keeping secrets and his slight resentment towards Bash it proves to be a trying time and puts pressure on their relationship.

This is a great story from Stoker and Bash; it has a dark tone to it in certain parts because of some of the subject matter, baby farming. While the Daughters of Eden aren’t baby farming it is touched upon and a dead baby is discovered, which is distressing.

I really enjoyed catching up with Stoker and Bash and embracing their characters again, Stoker is still plain and unassuming, disappearing into the background and often overlooked and forgotten. Bash on the other hand is as flashy as ever, attention grabbing and still lives to be the centre of the spotlight.

Bash is really affected by events; his memories of his past assail him and he eventually shares his last secret with Stoker. Stoker finally sees the true heart of Bash. While they do have some rocky moments their love finally connects true and their relationship moves on to a new level.

This story has a lot of mystery and intrigue, there’s danger and some horrid moments. The Daughters of Eden have dark secrets and Bash and Stoker are determined to root them out even if it does put their lives in danger.

I recommend this to those who adore historical mysteries, fantastic characters, danger and action, and an ending that has you hoping for the next book.